The federal government has hit a first obstacle in its effort to foster a competition among five aircraft manufacturers for the $26-billion contract to replace Canada’s fleet of CF-18s, as French-based Dassault Aviation has pulled its Rafale fighter jet out of the race, sources said.

The company has recently conveyed its decision to the federal government, said one government official and two industry officials to whom The Globe and Mail granted anonymity because they were not authorized to discuss the matter publicly.

The three sources said the company’s decision is related to the difficulties facing the European company in meeting the need to integrate its equipment with the Canadian and American militaries. A particular challenge for the company is the fact that France is not part of the Five Eyes intelligence-sharing alliance, which is made up of Australia, Britain, Canada, New Zealand and the United States.

The key mission for Canada’s next fleet of fighter jets will be patrolling the skies of North America in tandem with U.S. forces as part of the North American Aerospace Defence Command (NORAD). In that context, the new fighter jets will have to be able to communicate securely with Canadian and American forces, which requires state-of-the-art encryption and data-sharing technologies.

However, the three sources said Dassault felt that Canada’s requirements in terms of interoperability with the North American military posed too much of a problem. Dassault is the first company to pull out of the competition, but the two industry sources said there is no guarantee that the four other qualified bidders will enter the competition that is scheduled to be launched officially by May. At this point, there are two American fighter jets pre-qualified in the race (Lockheed-Martin’s F-35 and Boeing’s SuperHornet) as well as two European aircraft (the Eurofighter Typhoon, made by a consortium that includes Airbus, and Saab’s Gripen).

Federal officials and experts had already pointed out the challenges facing European companies in terms of winning the contract.

“Whatever aircraft we obtain has to be fully, seamlessly interoperable at the highest levels with the American Air Force and the rest of the U.S. defence establishment, which is going to be tougher for Europeans to do than it would be for the Americans," said Dave Perry, vice-president of the Canadian Global Affairs Institute. “There’s a way to do that, but it would also imply additional cost and integration risk.”

The federal government announced last month that it was giving six weeks to interested bidders to provide comment on a draft request for proposals (RFP), which lays out the requirements for the fighter jets.

In a briefing, federal officials said the government was willing to give European bidders additional leeway to meet mandatory requirements related to NORAD. In particular, the requirements for secure communications between Canadian and American aircraft and other military assets were modified to give all potential bidders additional time to meet them.

“We obviously have NATO and NORAD commitments, with NORAD probably being the bigger one, which means we have significant security requirements that are Canada-U.S.,” said Pat Finn, the assistant deputy minister in charge of procurement at the Department of National Defence.

When federal officials will analyze the various bids, he said, they will not automatically disqualify an aircraft that is unable to immediately meet the security requirements.

“We can’t have an aircraft that doesn’t meet it, but what we’ve done is we’ve created the test in a different way. ... If your proposal, your aircraft, cannot meet [a requirement] today, we are not saying automatically that you’re out; but you have to tell us what is your solution to meet it, at what price and what schedule,” he said. 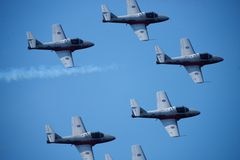 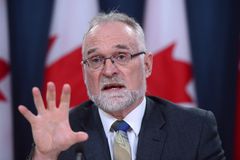 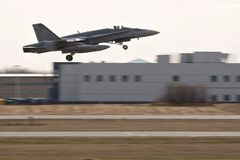