The union representing lawyers who work for Legal Aid Ontario says the main justification offered by the province for its 30-per-cent funding cut for the agency is wrong – and that the government of Premier Doug Ford has been misleading the public.

The government has said that Legal Aid received $86-million in added funding from the province since 2013-14, but served about 100,000 fewer clients last year, a 10-per-cent drop.

Attorney-General Caroline Mulroney cited the statistic in an April 12 letter to Legal Aid’s chief executive about the cuts, which were unveiled in the PC government’s first budget earlier this month. And Mr. Ford referred to Legal Aid handling fewer cases in a phone call to a Toronto-area talk radio station this week, when he urged anyone in need of legal aid to call the Premier’s office.

But lawyers with the Society of United Professionals, which represents 350 Legal Aid lawyers, say the government’s assertion about fewer clients is a “false claim.”

They say Legal Aid now serves more clients, pointing to the number of “certificates” issued to lawyers in private practice when they act for a Legal Aid client, which is up 23 per cent since 2013-14. Citing numbers from the 2018 Auditor-General’s report on Legal Aid, the union also says the number of clients served by the agency’s duty counsel is up 2.1 per cent over the same period.

Ms. Mulroney’s office said she was not available for an interview. A spokeswoman, Alexandra Adamo, would only say that the government’s numbers were drawn from Legal Aid Ontario’s annual reports.

The union says it can’t find evidence for the government’s numbers in those reports. But it suggested part of the discrepancy may be owing to changes Legal Aid made to the way it counts clients.

In 2017-18, community legal clinics funded by Legal Aid stopped tracking some of the services they offer, such as advice, referrals or things such as writing a letter to a landlord for a client. Instead, the agency’s overall numbers only track when formal “case representation” is provided for a client. That change saw the official numbers for clinic files appear to drop to 170,429 last year from 226,000 in 2016-17.

This makes the numbers an apples-to-oranges comparison, but would show a 0.6-per-cent decline in clients overall from 2013-14 to last year – still a far cry from the government’s 10-per-cent claim.

The union also says the agency started allowing non-lawyers to provide certain services as a cost-cutting measure in 2014, but has also since stopped including those services in its overall numbers. In 2014, according to Legal Aid Ontario’s annual report, these workers provided more than 100,000 services to clients.

Referring to Mr. Ford’s suggestion that people in need of legal help should phone his office, Legal Aid lawyer and union representative Dana Fisher said the agency receives an average of more than 1,000 calls each working day.

“Ford told anyone who needs legal services to call him. He guaranteed them that he would get them legal aid,” she said at a news conference at Queen’s Park. “If the public is taking him up on his offer, I suspect that the Premier is learning a little bit about how busy Legal Aid actually is.”

Raoul Boulakia, president of the Refugee Lawyers Association, said the province’s freeze on immigration and refugee funding as it demands Ottawa pick up the entire tab is leaving refugee claimants to face deportation hearings without legal help.

“This kind of political posturing, and treating people as hostages, in what’s similar to a ransom demand, it hurts people,” Mr. Boulakia said. " ... If you’re a custodial parent, you don’t starve your children and let them die because you think that your ex-husband is not sending you enough money."

A spokesman for Legal Aid Ontario declined to comment. 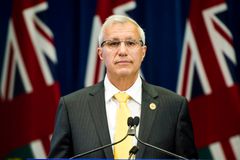