The CDC advised Americans on Tuesday to wear masks in public indoor settings, even if fully immunized, just two months after recommending that vaccinated people can avoid donning masks indoors, and only weeks after four Canadian provinces relaxed their own rules around mask wearing.

The reversal by the Centers for Disease Control and Prevention was prompted by the spread of the highly transmissible Delta variant and rising COVID-19 case numbers across the country.

British Columbia, Alberta, Saskatchewan and PEI stopped requiring masks in most indoor settings earlier this month in response to a surge in Canadian vaccination rates. Those provinces say they have no plans to tighten indoor mask mandates, despite the urging of health experts who say mask wearing will help curb the spread of the Delta variant. New Brunswick is set to remove its mask mandate on Friday.

Meanwhile, case numbers in Canada are rising. Chief Public Health Officer Theresa Tam said in a statement Tuesday that Canada saw a 36-per-cent increase in pandemic cases between July 20-26 compared with the previous week, while severe illness resulting from COVID-19 has continued to decline.

She said the Delta variant, which has infected vaccinated people on rare occasions, is one of the most prevalent strands in the country. The spread of Delta forced Israel to reimplement a mask mandate in late June, just 10 days after lifting it, when daily cases rose from zero to triple digits.

Dr. Tam encouraged people to continue wearing masks to help reduce the spread. Public Health Agency of Canada spokeswoman Tammy Jarbeau said in an e-mail that the agency does not expect that guidance to change any time soon.

Canada is acting like we’ve already won the vaccination marathon. But we’re miles from the finish line

However, Alberta Health spokeswoman Lisa Glover said in an e-mail that the province’s mask mandate will remain lifted for most public indoor settings, as it has been since July 1, but that the province will continue to monitor and adapt its approach as needed. Masking is now only compulsory for those who work or visit continuing-care facilities, hospitals and other acute-care facilities; and when using public transit or rideshares and taxis.

“While masking is currently required in certain settings, we encourage all Albertans to assess their individual situation and risk factors when making decisions about whether they wish to wear a mask in other locations,” Ms. Glover said in the e-mail.

B.C. Provincial Health Officer Bonnie Henry said Tuesday that although the province lifted its mask mandate, residents are still encouraged to wear masks to protect themselves and others.

“We are getting there, but we’re not yet at the place where we can let up these measures and our recommendations to everybody will continue to be wearing masks in indoor public spaces, particularly when they’re crowded spaces,” Dr. Henry said.

Like PEI, Saskatchewan also plans to continue to do without masks, and to rely on vaccines to keep case numbers low.

“Vaccination continues to offer residents the best protection against COVID-19 and its variants, and the province continues to focus on increasing vaccination rates,” said Colleen Book, director of communications at the Saskatchewan Ministry of Health.

Guidelines around mask wearing have evolved since the start of the pandemic. After being deemed unnecessary for healthy individuals by some Canadian public-health officials in March, 2020, Dr. Tam soon recommended their use in light of new research.

Shannon Majowicz, an epidemiologist and associate professor at the University of Waterloo, said she expects provincial mask mandates to come back into place, given the virality of the Delta variant. She thinks it would be the right move.

“I’m not in a rush to see masking lifted because I do think it is one of the things that will let us have a lot more of activities possible,” she said. “Vaccines work best when they have less work to do, and masking is the way to do that.”

Dr. Majowicz said Canada’s high inoculation rate made it possible to consider removing mask mandates. According to recent data, almost 65 per cent of residents older than 12 were fully vaccinated.

Prime Minister Justin Trudeau said on Tuesday that Canada has enough doses to fully inoculate everybody eligible, a milestone hit two months ahead of schedule. Dr. Majowicz said, however, that it could take a vaccination percentage in the high nineties to really get rid of masks without fear of seeing more case surges.

For that to happen, she said, children 12 and under must receive their doses. That age group is still waiting for vaccines to become available. Until that happens, she calls it a no-brainer to continue wearing masks.

“Why wouldn’t you put a protective measure over your face? It’s a relatively easy measure we can take that really does make a substantial difference,” Dr. Majowicz said. “We are so close to near normalcy.” 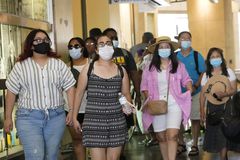 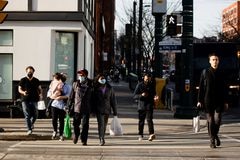