After working all day as a biomedical field-service representative, repairing hospital equipment like ultrasound and MRI machines, Shane Whittleton returns to his rural home in southeastern British Columbia.

The 26-year-old steps away from his day job into a life much closer to his roots growing up in Uteshenie, a Doukhobor village near Castlegar in B.C.’s West Kootenays.

“I go plant the grass, weed the garden, make sure my tomatoes are alive, check my trees, make sure all the fruit has no weeds in it and then as soon as that's all done, I start doing landscaping and make my home better,” Mr. Whittleton said.

For Mr. Whittleton, this daily routine is an essential part of living as a Doukhobor. He tries to attend as many community events and prayer meetings as he can and every night he says a prayer before bed. Right now, he is trying to master his Russian, because he believes knowing the language is crucial to understanding of culture’s history. He moved to Alberta to work and study in 2011, but returned a year ago because he wanted to be closer to the land.

“I live on acreage now. For me, it's in my blood to live like that and I long for it,” Mr. Whittleton said. “There is something about pollen, weeding your garden, watching your plants grow, it really puts in perspective life in general.”

Mr. Whittleton is one of a dwindling number of Canadian Doukhobors who still observe the religion and its culture more than a century after his ancestors were expelled from Imperial Russia. While there are an estimated 65,000 people of Doukhobor descent living in Canada today, only 2,290 listed Doukhobor as their religion in the 2011 Census – as younger people grow disinterested in the religion, lose their connection to the Russian language or move away from their close-knit villages in rural B.C.

Many elders predict the Doukhobors could die out altogether in a little more than a decade – a dire forecast that is driving a new effort to save the culture from extinction, while revealing divisions within the community about what modern Doukhoborism should look like.

The Doukhobors were banished from Russia in the late 19th century, after facing persecution from the Tsarist government because of their rejection of Russian Orthodoxy and its priesthood, rituals and icons. Doukhobors consider themselves Christians, as their religious ideology is derived mainly from the teachings of Jesus Christ. However, they don’t consider the Bible to be a “holy” book, but rather a preservation of previous knowledge.

About 5,000 Doukhobors resettled in B.C. in 1908 in the area around Castlegar, where they became known for their pacifism, a cappella singing and communal way of life. An extremist arm of B.C.’s Doukhobors called the Sons of Freedom made headlines in the 1950s when their children were seized by the RCMP and placed in a government-run school.

Today, their settlements around Castlegar are reminiscent of Russian villages. It’s not uncommon to hear threads of conversation in a mix of Russian, Ukrainian and Georgian. Even the lilac that grows in the area – distinct from the kind found in Vancouver – was supposedly brought from Russia by the first Doukhobors.

Their homes, especially those of old Doukhobors, still have a traditional, old Russian look inside: Wooden sideboards filled with books and glass goblets, wool carpets on the floor and old family portraits on the walls. Every home has the psalm “Be Devout” framed on the wall.

Each Sunday, the Doukhobors gather for prayer at their community house or on the lawn outside. A table is set with bread, salt and water, which are Doukhobor symbols of “toil and peaceful life.” Women stand on one side with shawls covering their heads, and men on the other side wear kosovorotki, a traditional shirt hand-sewn from hemp.

After they sing psalms in Russian, each bows to the person next to them, recognizing the spirit of God, which Doukhobors believe is within the heart and soul of every human being.

Concerns about the future of these communities came to a head earlier this year at the annual celebration for Doukhobors of B.C., the Union of Youth Festival, held in May. In addition to the traditional a capella concert and a prayer meeting, organizers added a new element to the program: A workshop to discuss the community’s future. They called it “Spirit Wrestlers 2050” – a reference to a quote by writer Leo Tolstoy, who helped their immigration to Canada, where he said that Doukhobors are “people of the 25th century.”

About 150 people attended the workshop. Participants, mostly elders, were given a grim forecast: It’s estimated that by 2030, the number of people who identify as Doukhobor will be zero.

“Quite a few of the elder members didn't even want this topic discussed, said it's kind of a disgrace to discuss it, because that's acknowledging that it's a dying breed in a sense,” Mr. Whittleton said.

Participants brainstormed ways to keep people from leaving Doukhobor communities or to keep them connected if they do.

Pitches included developing economic opportunities in the communities to give young people a reason to stay, similar to the Brilliant Jam Factory in Brilliant, B.C., in the early 1900s, where most of the local Doukhobors worked. But there are obstacles. The Union of Spiritual Communities of Christ (USCC), the Doukhobors’ governing body, owns a significant amount of farmland in the Kootenays, but because the USCC is a charitable organization, children and grandchildren cannot make a profit from the land unless they rent it from the USCC at fair market value, which is often prohibitively expensive for young adults.

For those who leave, Gary Kooznetsoff, a Doukhobor and software engineer, proposed developing an online platform to connect Doukhobors scattered around the country.

Since the workshop, people in the community are working on their own ideas. John J. Verigin, Doukhobor leader and executive director of the USCC, has proposed to host a conference of Doukhobor youth from all over the world in 2020 to allow them to consider their future independently from elders. The leaders of Doukhobor communities, most elders are adamant about maintaining tradition and skeptical of any radical changes to their way of life.

“I've become okay with the fact that Doukhoborism as we've known it is probably at its end and I'm working on taking the legacy forward,” Mr. Kooznetsoff said.

Kelly Makortoff, 33, grew up in a Doukhobor household, but said she was not immersed in the culture. She often felt disconnected because she didn’t speak Russian, which meant she didn’t understand the psalms she was forced to memorize as a kid for molenia, the weekly prayer meeting.

“I can never show up at molenia and be comfortable,” she said. “I think that has a huge thing to do with language though, because when you lose the language I think that's where the soul goes out of it.”

Growing up, she always wanted to speak the language and be involved in the Doukhobor culture, but it seemed to conflict with the routine of going to high school. She saw it as a choice between one lifestyle or the other.

She thanked her grandparents and large family gatherings in their wooden log house for the fact that she is still involved in the community and understands the Doukhobor principles on a spiritual level. But to her, being a Doukhobor in the fullest sense also requires keeping up the material traditions and practices.

“I think the material things are stronger symbolism of culture,” Ms. Makortoff said. “Rather than outwardly acting the physical culture of being a Doukhobor, I am spiritually living it in a more independent way. I would love to have both.”

For many people in the community, being a practicing Doukhobor means participating in community gatherings, being involved in a choir and regularly attending prayer meetings.

But Ms. Makortoff’s grandfather, Fred, disagrees that Doukhoborism depends on what he considers material things. He said the youth will only be able to carry the culture forward if they focus on the spiritual aspects, rather than just customs and traditions.

“If they have the spirit, that part in them, it will succeed. If they do it just on a secular level and change habits and how we do things, it'll be just changing one form to another form, no spiritual development and that's what the Doukhobors need at this point in time,” Mr. Makortoff said.

He’s witnessed fundamental changes in the community: From the loss of language and changing dress codes for traditional ceremonies to a shift in the mindsets of young Doukhobors.

“The trajectory seems to be inexorably set for the sect known as ‘The Doukhobors’ to soon become a footnote in history,” he said. “Unless something happens, unless there is a change.”

Editor’s note: An earlier version of this story incorrectly said 2,200 listed Doukhobor as their religion. In fact, it's 2,290. 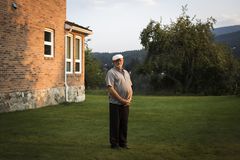