Gary MasonNational affairs columnist
Published May 28, 2021 Updated May 28, 2021
For Subscribers
Comments
Text Size
Please log in to listen to this story. Also available in French and Mandarin. Log In Create Free Account

One of the more enlightening testimonies related to the pandemic occurred this week in Britain.

Appearing before a parliamentary committee, Dominic Cummings, the former top adviser to Prime Minister Boris Johnson, captivated his inquisitors with an astonishingly frank and brutal assessment of the job the Conservative government had done dealing with the crisis.

While some might say Mr. Cummings had an axe to grind after being dumped from his job, there was no denying the exclusive vantage point he had to gain his insights. He conceded that neither he, nor Mr. Johnson, were truly qualified to be dealing with an emergency of this magnitude. The PM, he said, was particularly bereft of any sense of how to handle a situation as complex and multifaceted as COVID-19 – consequently, tens of thousands of people needlessly lost their lives.

“When the public needed us most, the government failed,” Mr. Cummings said. At another point, he added: “[It was] lions being led by donkeys.”

One has to wonder if there are political aides across this country who were nodding knowingly in agreement with everything Mr. Cummings had to say. There have been some spectacularly poor performances by governments in Canada, with life-and-death decisions by them still being made every day.

This week, B.C. and Alberta unveiled their reopening plans. To say that they offer radically different roadmaps to a postpandemic world would be an understatement. One appears to be based on science and the other on the scheduled opening day of the Calgary Stampede. One sees life returning to normal in September, the other in early July. The two visions are difficult to reconcile.

Neither, however, is immune from disaster.

British Columbia’s plan involves four distinct phases, which culminate in September when the government says it expects most of the current public-health measures to be lifted. The reopening counts mostly on people getting a first dose of the vaccine. By Sept. 7, for instance, it is anticipating that more than 70 per cent of the population will have received a single jab. And that, the government hopes, will be enough to eliminate the virus as a threat.

The danger is that one dose may not be enough to fend off certain variants. This has become a problem in Britain with flareups in regions where people hadn’t been vaccinated or only had a single dose of vaccines that weren’t as effective against particular variants. England’s public-health agency released a statement emphasizing how important it was for the public to get a second dose as soon as possible.

Perhaps to that end, B.C. announced Thursday that it is shortening the interval between first and second shots from four months to eight weeks.

Alberta’s plan, meantime, seems much more risky given that only a few weeks ago the province was the COVID-19 hot spot in North America. Premier Jason Kenney hopes to lift most pandemic-related measures – including mandatory mask wearing – by the end of next month. It is the most ambitious restart blueprint in the country.

Not everyone is happy about it either. The province’s former chief medical officer, James Talbot, has called the plan “aggressive to the point of recklessness.” He said the government is effectively opening up the province on the hope that 70 per cent of the population, with a single dose, will be enough to scare the virus away. Currently, about 50 per cent of the population has received a single shot.

We’ll see. Mr. Kenney has had his plan green-lighted by Deena Hinshaw, the province’s current Chief Medical Officer. If Dr. Hinshaw thought it was as reckless as one of her predecessors believes, then she would have a professional duty to speak up and say so. In the absence of that type of statement, we can only assume she thinks the plan is safe and practical.

It goes without saying that Mr. Kenney has been under more public pressure to ease pandemic-related edicts than any provincial leader in the country. And if it appears that he’s pushing the limits of what a safe reopening looks like, it’s probably because he is. He wants to quell the dissent in Alberta as quickly as he can, so he can focus on repairing the economic and societal damage the pandemic has caused. And maybe the political toll as well.

Still, you wonder what the top-level internal discussions have been like inside his and other administrations in this country. And whether some aides have thought their government’s pandemic response has been a case of donkeys leading lions. 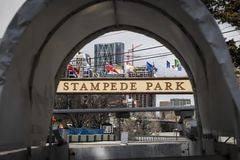