Coronavirus information
The Zero Canada Project provides resources to help you make the most of staying home.
Visit the hub
Wendy Stueck and Andrea Woo
Vancouver
Published April 23, 2020 Updated April 23, 2020
Comments
Please log in to listen to this story. Also available in French and Mandarin. Log In Create Free Account

The discovery of a newborn baby in a portable toilet in Vancouver’s Downtown Eastside has brought fresh anguish to a troubled neighbourhood.

The Vancouver Police Department on Thursday said it was investigating after a deceased newborn baby was found in a public restroom Wednesday evening.

In a statement, VPD Constable Tania Visintin called the incident “extremely tragic” and said police hoped to speak with witnesses and the mother as police were concerned for her mental and physical well-being.

Tina Beaulieu, a mental health worker at PHS Community Services Society, was working at the Molson overdose prevention site steps away on Wednesday when she noticed a crowd had gathered around a nearby bank of portable toilets.

As she and other staff members helped direct traffic for first responders, she wondered if perhaps someone had overdosed.

Learning the body she witnessed being removed was that of an infant was “traumatizing,” she said.

Ms. Beaulieu said people in the neighbourhood are doing the best they can to get by, but the shuttering of many community spaces and social services due to the COVID-19 pandemic has left people with nowhere to turn.

“People who are homeless don’t have a chance of getting anything that they need. People are being displaced as we speak,” she said. “It’s a really hard time, which is why the neighbourhood feels so crazy right now. It’s cheque week, [COVID-19] is happening, there’s no resources for people," Ms. Beaulieu said.

The incident follows weeks of questions to public-health officials about conditions in the Downtown Eastside, where people congregate in close quarters on sidewalks and where dozens of tents are set up in a homeless encampment in Oppenheimer Park. The neighbourhood has also been hit hard by the overdose crisis. More than 1,200 people in Vancouver have died of illicit drug overdoses since the beginning of 2016, with many of them in the Downtown Eastside.

Mebrat Beyene, executive director of WISH Drop-in Centre Society, a neighbourhood group that provides meals and support to the street-based sex workers, on Thursday said demand for meals has increased since the province declared a state of emergency in March. Women have been coming to the centre for a safe place to shower and sleep, she said, because they feel unsafe on the street.

“I’m grieving for that child and for that woman, I can’t imagine what she must have been going through,” said Ms. Beyene, who added that she did not know the woman’s identity.

Ms. Beyene said she would like to see governments do more to provide housing and financial aid for people such as sex workers who don’t qualify for federal programs.

Provincial Health Officer Bonnie Henry said Thursday that the province will review the unintended consequences of actions taken related to the COVID-19 pandemic, factoring in race and socioeconomic status.

“We know that people who are underhoused, people who are lower socioeconomic status, will be more affected by [these crises] –​ both the health crisis but also the economic crisis – so we want to be able to measure that,” Dr. Henry said.

Vancouver Mayor Kennedy Stewart on Wednesday said the city had already taken “unprecedented action” to fight COVID-19 in the Downtown Eastside, including cleaning single room occupancy hotels and delivering thousands of meals to residents, and was expecting more help from the province.

The provincial government is soon expected to announce additional measures related to the Downtown Eastside.

On Thursday, a memorial of flowers, stuffed toys and candles grew in front of the portable toilet.

Miranda Bolton and her husband hung a baby's outfit – a pink ruffled top with floral shorts – to the door of the plastic cubicle and placed several stuffed toys and trinkets around it.

Ms. Bolton said she didn’t know the mother but wanted to pay her respects and that it broke her heart to learn of the baby through the news.

“I wonder how the mother is, if she’ll turn up,” she said. “People don’t know what one person is going through.”

Applications for B.C.'s emergency benefit for workers to open in May
April 23, 2020 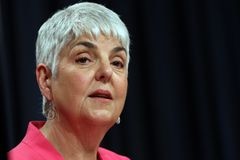 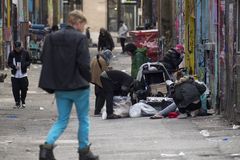