Voter turnout for the B.C. election was the lowest in almost a century, with less than 52 per cent of registered voters marking a ballot – despite an overwhelming response to the option of mailing in a ballot as well as a surge of voters who took advantage of advance polls.

The 51-per-cent total represents 1.2 million votes at the polls Saturday plus advance polls, and 525,000 mail-in votes, and 75,000 absentee ballots. There are 3.5 million registered voters in the province.

According to Elections BC general election statistics from 1928 to the last election in 2017, the previous lowest turnout was 55 per cent in 2009.

John Horgan gambles on an election no one wants

Political scientist Hamish Telford of the University of the Fraser Valley said the turnout result for this election is not surprising given the pandemic.

“I thought that was one of the likely things that would happen in a pandemic election in British Columbia,” Prof. Telford said in an interview on Sunday. “It’s pretty close to where I thought it would be.”

“People are preoccupied. People weren’t happy with the election being called. They also have bigger concerns at the moment.”

“The recruitment drives to get these people on the electoral rolls and out to vote was more of a challenge.”

An Elections BC spokesperson on Sunday declined comment on turnout, saying the office would issue a statement this week.

So far, the BC NDP has won 53 of 87 seats in the legislature, the Liberals 27 seats and the BC Greens three. Four ridings were too close to call.

Chief Electoral Officer Anton Boegman said during a briefing last week that his team “very much are hoping” to have the final tallies complete by Nov. 16, but the unprecedented volume of mail-in ballots could make that target challenging to meet.

It is not just the large number of mail-in ballots that will make the manual counting process slow; a large number of ballots required voters to write in the name of the party or candidate they wanted.

A substantial number of ballots – Elections BC cannot say how many – were mailed out before nominations closed for candidates. On those early ballots, voters needed to write in the name of their preferred candidate, or their preferred political party, in a blank box.

Campaign veteran Mike McDonald, who led the the BC Liberal Party’s 2013 election campaign, said the write-in ballots create the potential for battles in tight races.

“In some ridings where the outcome is closer, the level of scrutiny will be high,” he said in an interview. “The parties will vigorously defend their points of view. ... There is a rare breed of lawyers who are really good at this, for all parties.”

Between now and Nov. 6, the mail-in ballots collected by Elections BC must be sorted and sent to the correct electoral districts for a series of integrity checks.

If the voter didn’t sign the outside certification envelope, for example, or if a household put more than one ballot inside, those ballots will be set aside and not counted.

Then, in each of B.C.'s 87 ridings, candidates, scrutineers and in some cases lawyers will assemble in a room with election officials. At the centre of each room, the district electoral officer will be the final arbiter when ballots are challenged.

Bill Tieleman, an NDP strategist who has run a string of votes in B.C. referendums, predicted the write-in ballots will be open to dispute if the intent is not strictly clear. “If someone wrote in [NDP Leader] John Horgan or [Liberal Leader] Andrew Wilkinson or [Green Leader] Sonia Furstenau, unless they were in that riding, it will be a rejected ballot.”

He said it will take time and patience.

“There are no tabulators. There’s no machine count. It’s all a hand count,” he noted. “We have 87 different electoral districts. So, until each and every one of them has completely done their account and been satisfied and everyone in the room is satisfied and the lawyers, the scrutineers are satisfied, nobody can say, ‘Okay, the election we can now report out.’” 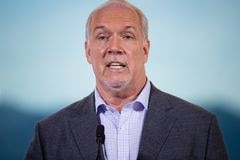 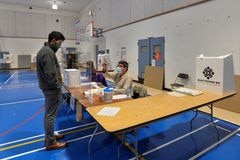