When the first case of coronavirus was confirmed in Toronto last month, King Cole Ducks Ltd. suffered a 20-per-cent drop in its poultry sales. The next week, sales were down 60 per cent.

Business has started to pick up in recent days, but Patricia Thompson, vice-president of sales and marketing, says the Stouffville, Ont.-based duck producer, which depends on Asian restaurants in Toronto for a third of its sales, is bracing for more losses as Chinese restaurants across the city and area struggle to deal with a loss of customers.

“The impact over the past three weeks has been significant, as it affects all areas of our business, from hatching, to farming to production,” she said. "It’s really hard to operate our businesses when you don’t know what tomorrow may bring.”

Catherine Hou, president of the Chinese Cuisine and Hospitality Association of Canada, said restaurants in the Greater Toronto Area are reporting decreases in sales of between 30 and 80 per cent in recent weeks. Restaurants are dealing with the slump in different ways, such as cutting employee hours or focusing their sales on delivery service.

“We’ll gradually see some of the restaurants cannot be open any more,” Ms. Hou said. One small restaurant, she said, has already shuttered its dining room doors and is offering service by delivery only.

In response to the drop in sales, the CCHAC and the Federation of Chinese Canadians in Markham have launched Asialicious, a two-week-long food festival that will run from Feb. 14 to 28. In 2003, Taste of Asia was launched as a way to boost the local economy during the SARS outbreak. The annual event, which takes place every year in June, has become Canada’s largest Asian festival.

Federal Health Minister Patty Hajdu, Ontario Health Minister Christine Elliott and Toronto Mayor John Tory met for lunch at Dim Sum King in Toronto’s Chinatown on Tuesday to promote the area and discourage racist, xenophobic messages about the coronavirus, which began in China. Seven cases have been reported in Canada, including three in Ontario, but there’s been no deaths.

Ms. Hou at the CCHAC said it’s not only restaurants that are affected by the stigma surrounding coronavirus. Farms, suppliers and online delivery services are taking hits, as well. “This is a huge industry, everybody is linked together,” she said.

For some businesses, however, such as FoodHwy, a delivery service that specializes in Asian cuisine, business has increased. Since the outbreak, its sales have increased by about 20 per cent.

“Restaurant owners are getting really panicked,” said Di Han, chief executive officer and founder of the delivery service. “A lot of restaurants come to us, and they say maybe food delivery will be a way to help them to grow in this particular period.”

About 80 per cent of their clients are Asian restaurants.

Though sales are up, Mr. Han said the overall profit margin has actually decreased by more than 40 per cent. Because many of its drivers are choosing to stay home for fear of the virus, FoodHwy is offering higher bonuses to give them an incentive to work. It is also giving discounts to customers purchasing from restaurants participating in Asialicious.

Mr. Han said because their service is dependent on Chinese restaurants, FoodHwy is doing what it can to support struggling businesses. “If they go bankrupt, we will go bankrupt as well,” he said.

Liuyishou Hot Pot, an international restaurant chain with three locations in the GTA, is one of the establishments increasing its online delivery service as their dining room numbers dwindle.

Since the end of January, the restaurant chain has doubled its food delivery sales.

“Right now we are starting to do the hot pot delivery,” said Angus Wei, the chain’s North America operations manager. The restaurant will also deliver the pot and stove – for a $35 deposit fee – needed to make the traditional dish.

Mr. Wei said the restaurant’s sales were down by about a third overall, and nearly half in some locations. “There were no customers coming in at all in the first week." 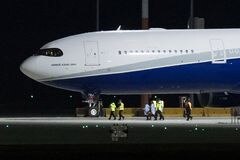 Coronavirus information
The Zero Canada Project provides resources to help you manage your health, your finances and your family life as Canada reopens.
Visit the hub
Follow us on Twitter @globetoronto Opens in a new window
Report an error Editorial code of conduct
Due to technical reasons, we have temporarily removed commenting from our articles. We hope to have this fixed soon. Thank you for your patience. If you are looking to give feedback on our new site, please send it along to feedback@globeandmail.com. If you want to write a letter to the editor, please forward to letters@globeandmail.com.
Comments