Police are looking for two suspects − and their motive − after a makeshift bomb was thrown into a busy Indian restaurant Thursday night.

Normally, Bombay Bhel, a well-known chain-restaurant outlet in a Mississauga strip-mall plaza, would be closed by 10 p.m. But two birthday parties were wrapping up their celebratory dinners that night, so owner Manmohan Singh Nagpal sent his staff home and hung around as the groups finished.

There were 40 people inside when the bombers showed up around 10:30 p.m.

A total of 15 people were taken to hospital, three of them with more-serious injuries.

Mississauga explosion: What we know so far about the IED blast at an Indian restaurant

On Friday afternoon, after the plaza had reopened and all of the victims had been treated and released from hospital, Peel Regional Police said they had yet to determine the intent for the attack.

“I want to assure everyone that every police resource is being used right now to locate the people responsible for this horrendous act,” Peel Regional Police Chief Jennifer Evans said earlier Friday.

Wearing his pyjamas on the front porch of his home on Friday afternoon, the restaurant’s owner, Mr. Nagpal, said he did not get home from the police station until 6 a.m. His car was still in the parking lot.

He is okay, he said, but can’t stop thinking about his customers − and is grateful for the first responders.

“They really took care of my guests,” he said.

His restaurant will remain closed as police shift their investigation from the outside parking lot to the inside dining room. Neighbouring businesses in the plaza at Hurontario Street and Eglinton Avenue East – none of which were impacted, police said – reopened Friday afternoon.

Chief Evans said her service is in contact with neighbouring police forces in the Toronto area, the Ontario Provincial Police and the RCMP. The service also noted that members of the community are co-operating.

Sergeant Marie Damian, an RCMP spokeswoman, would not comment when asked whether the regional Integrated National Security Enforcement Team was assisting Peel investigators.

Ontario Premier Kathleen Wynne said Friday that provincial-security services have given her no indication that the incident in Mississauga was linked to terrorism and instead is being treated as a “serious criminal incident.”

“The order of the moment is to find the attackers,” she said, speaking from the Toronto waterfront near Ontario Place.

Expressing her condolences for the victims, Ms. Wynne said the event could cause fear for some, coming so soon after the van attack in northern Toronto.

“These are shocking incidents and made all the more shocking because they have been unusual in our society. And so to have two of these things happen in a short period of time, I think it is worrisome,” she said. 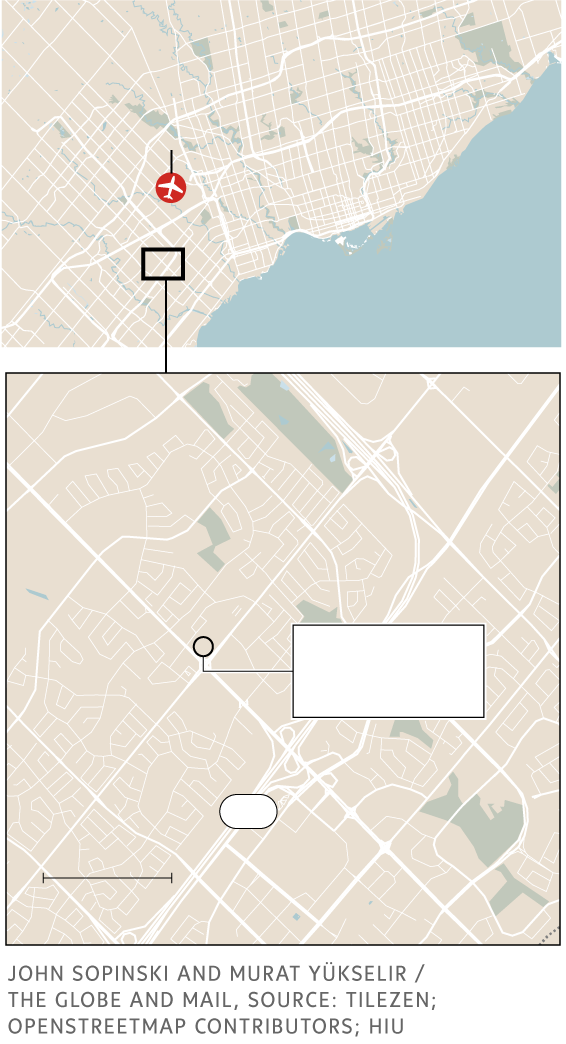 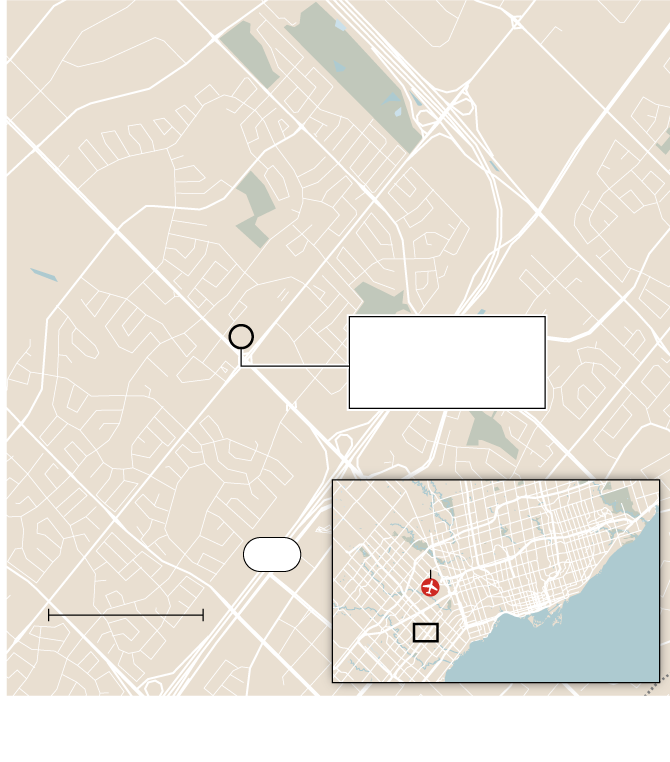 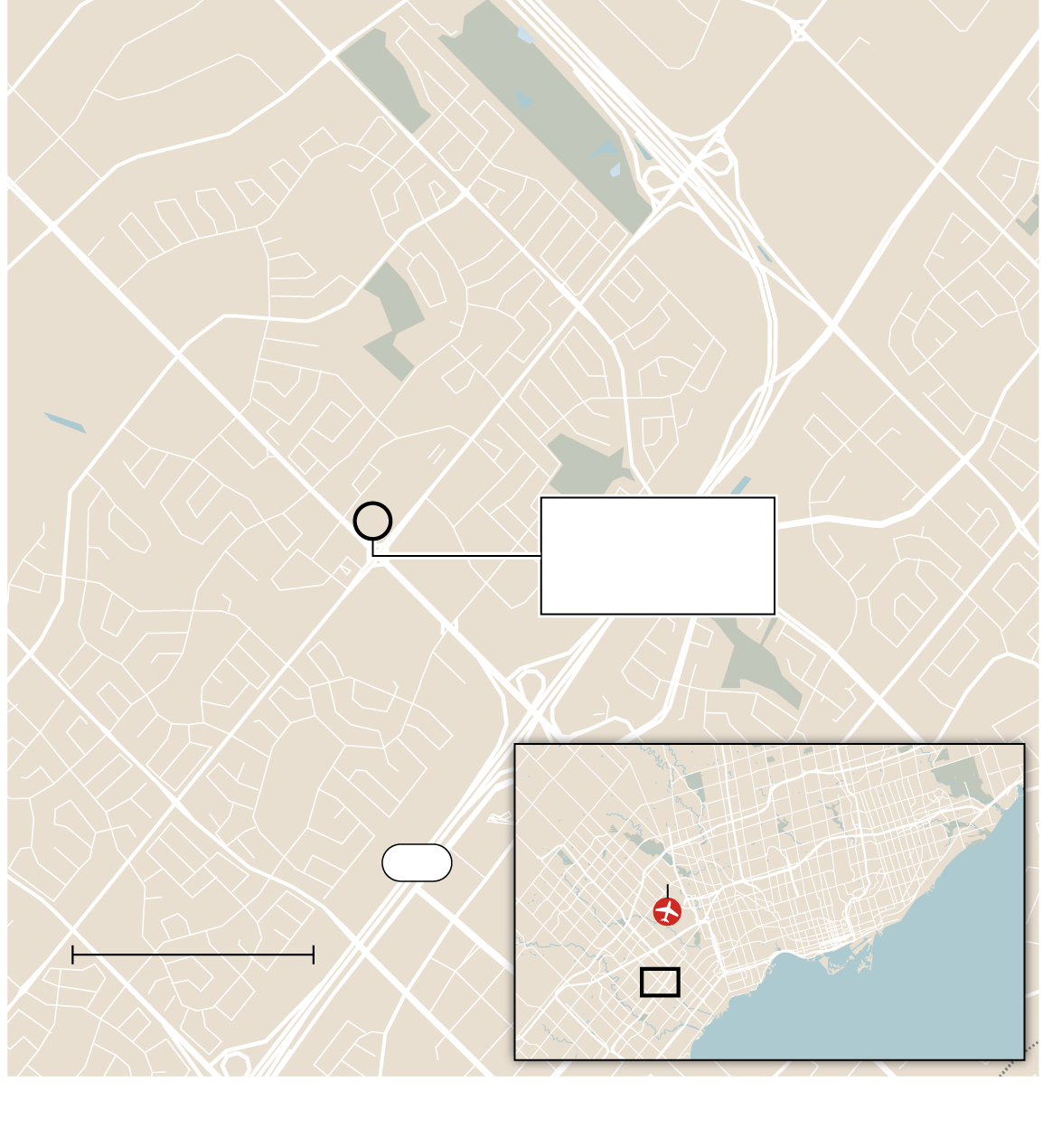 “This is not the Mississauga that I know,” she said. “… The people who have done this need to answer to their crimes and they need to be brought to justice.”

The attackers had their faces covered when they walked into the restaurant Thursday night, with the hoods of zippered sweatshirts pulled over their heads.

In an image shared by police – a still photo from surveillance video in the restaurant – one of the suspects is seen wearing a baseball cap and holding what looks like a paint can.

Inside, they threw what police described as an improvised explosive device, and then fled. Police say that they took off in a car, though no description of a vehicle has been released.

Across the parking lot, at the neighbouring Montana’s BBQ & Bar, Rafael Conceicao heard the blast and rushed over to help.

Speaking to television crews afterward, he described seeing broken glass, people screaming and rushing out amid the birthday balloons and cakes. “There was lots of blood on the floor. Many people were hurt at the time.”

Mississauga Mayor Bonnie Crombie told media that the two suspects in an overnight bombing of a restaurant are cowards who need to be brought to justice.

One man had glass in his eyes, he said, adding that a woman with medical training gave others first-aid directions. Then, within minutes, police and firefighters arrived.

Fifteen people, ranging in age from 23 to 69, were sent to hospital. They were all released by Friday afternoon.

Sanjiv Jagota, who owns a business in the plaza, had been driving by with his wife, on their way out for a drink, when they saw the commotion and stopped.

“There were so many ambulances here last night, coming and going,” he said Friday morning, watching from outside the police tape as investigators snapped photos around the parking lot.

“My main concern is that they’re okay.”

The three most seriously injured victims – a 35-year-old Brampton man and two Mississauga women, one 62 years old the other 48 – were taken to the trauma centre of Sunnybrook Health Sciences Centre.

All three are Canadians of Indian ancestry, said India’s Consul General in Toronto, Dinesh Bhatia, who visited the three patients and their families at Sunnybrook.

Chief Evans made an appeal for witnesses, including motorists with dash cams and restaurant patrons who left before police showed up.

“We need the public’s assistance to help us identify these men. I urge anyone who may have information about this incident, or who was at or near the restaurant at the time of the incident, to please contact Peel Police 12 division,” she said.