There’s long been a notion that toiling for hours and hours in the office is the hallmark of a good worker.

But it’s becoming clear that working smarter trumps working harder in all sorts of ways, and flexibility is key.

International, national and provincial research shows that working flex hours, a four-day week and telecommuting can improve your finances, your health and your impact on the environment.

Take commuting, for example. The simple act of commuting to and from work every day can create stress and place financial strain on a person, which impacts their food choices and physical activity, says Bill Howatt, chief of research and workforce productivity for The Conference Board of Canada.

“When you think about commuting two hours a day – that’s dead time,” Howatt says. “So how [can] we help people maximize time? By removing barriers like rushing to work, and dealing with traffic. That can remove a lot of stress.”

When you consider the costs of gas and parking, that “discretionary financial health can play a role in people’s mental health,” he adds.

According to a 2019 study by the University of Guelph, in southwestern Ontario alone, telecommuting can save the average commuter between $8,800 to $23,900 per year.

Beyond the benefits to your pocketbook and your mental health, the Canadian Index of Wellbeing reports that working Canadians lose about two weeks of their free time each year to commuting.

Flexible work schedules can reduce commute times or eliminate commuting altogether if you can primarily work from home. If you work flexible hours (outside of the usual 9 to 5), the varying start times can also reduce the number of cars on the road during rush hour, alleviating congestion.

“That improves health by reducing people’s impact on climate change and the environment,” says Bryan Smale, director of the Canadian Index of Wellbeing at the University of Waterloo.

According to a 2014 study by Carbon Trust in the U.K., telecommuting or working from home could reduce carbon emissions by over three million tonnes per year. And when overall wellbeing is taken into consideration, making environmentally responsible transportation choices not only reduces greenhouse-gas emissions but also contributes to health.

“People that take public transit are physically healthier than those that drive, because even those short walks on their commute between work and home and other places improves their overall health,” Smale says.

Working flexible hours can also spare you more time for exercise. ParticipACTION, a Canadian non-profit organization that’s been promoting healthy living for decades, found that most Canadian adults sit for up to 10 hours a day, and only 18 per cent are moving enough to maintain physical and mental health.

“Doing low-intensity movements over the course of every hour or even every two hours can have dramatic effects on health,” Toman says. “When employees feel empowered to do so, their health improves.”

“The connection is that when people feel they are empowered to be healthier and more productive, and when the employer provides flexibility in the work day, everybody is benefiting,” Toman says.

Allison Cowan, director of human capital research at the Conference Board of Canada, says people are feeling overloaded due to the pressures of the many caregiving roles they play and are vulnerable to stress and burnout.

“When work-life balance is not managed appropriately, emotional stress, anxiety, depression, absenteeism or presenteeism [working while sick] can affect productivity,” Cowan says. “With reduced energy, people are highly susceptibility to colds and flus.”

The Conference Board of Canada found that workplace absences cost an estimated $16.6-billion in payroll in 2011.

Given that nearly half of caregiving is provided by family members, according to Statistics Canada, “flex work can help provide time to manage the challenging and unexpected demands of child and elder care,” Cowan says.

This kind of data is prompting more and more workplaces to offer flexible solutions for employees. According to a recent survey by the Conference Board of Canada, 86 per cent (or 9 out of 10) of employers offer at least one form of flexible work arrangement.

Considering the benefits to workers can include increased physical, emotional, financial and environmental health, perhaps it’s time for more of us to get flexible. 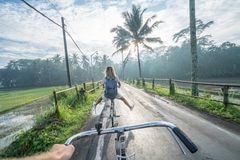