Until arriving at Brian Sutter’s ranch, I’d never heard of a Lewis Cattle Oiler. As it turns out, the oiler is a handy machine – it makes a Black Angus bull shine like a freshly waxed limousine, and simultaneously applies a coating of insecticide to keep flies away.

In photos: On the farm with Brian Sutter

This is one of many things learned from Sutter, a pro hockey legend, part of a family dynasty that saw six brothers from an Alberta farm make the NHL. A seventh brother, reputedly the best player of them all, stayed home to run the family farm. 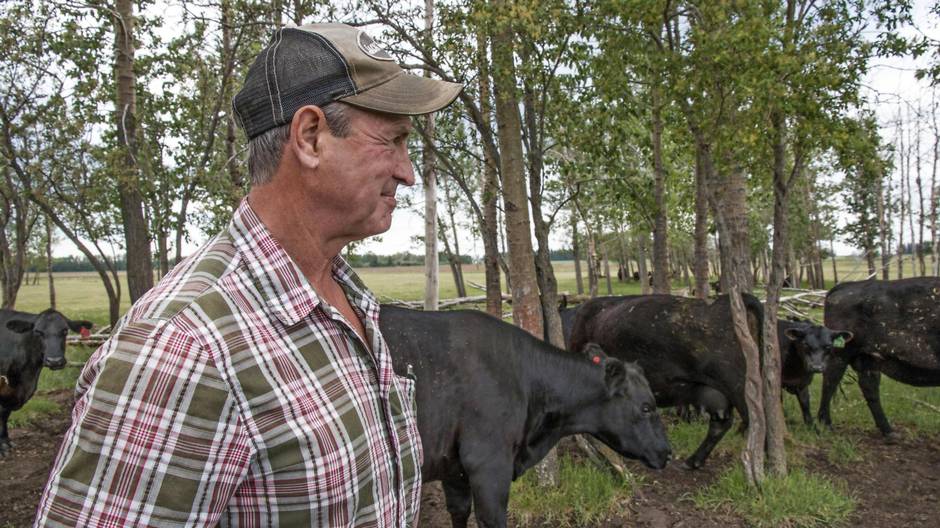 Heading across the Alberta plains in a pickup truck, it’s easy to see why Sutter and his brothers managed to collect six Stanley Cups. Sutter is gritty and humble, and his handshake is like a hydraulic vice – that’s what comes from a lifetime slinging hay bales and competing with the best hockey players in the world.

“I always worked for it,” says Sutter. “I was a grinder. But I could score, too.” He points to his nose, which is bent in several places. “And I had my share of fights.”

Sutter is also a dyed-in-the-wool truck guy. He grew up on a ranch where the family car was a pickup truck, and he still uses a truck every day. And I’m here with a brand-new Ford F-150 as part of an odyssey through the Rockies and across the Alberta plains. 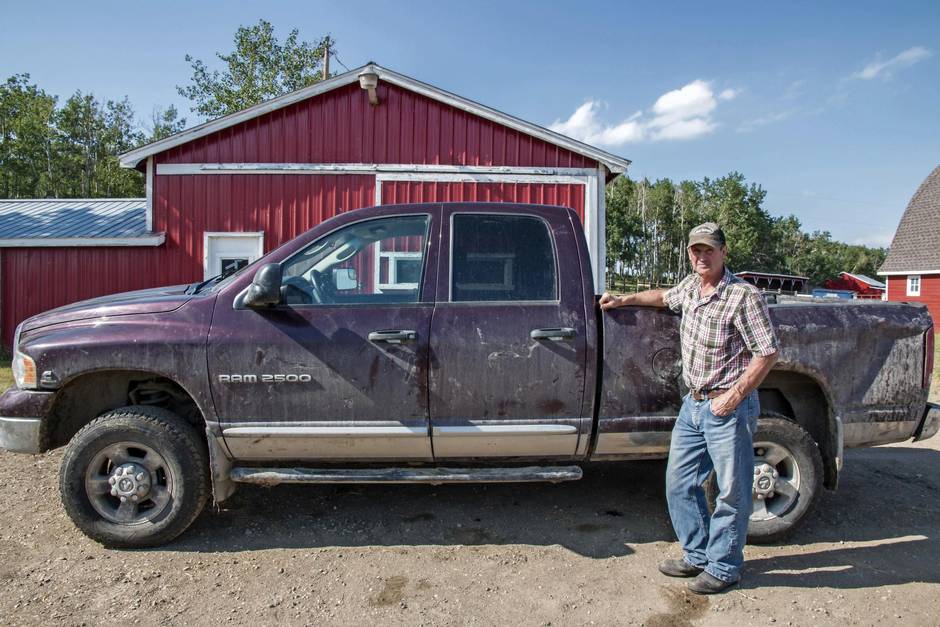 Sutter has left his battered Dodge diesel back at the house so he can test-drive the new F-150. This is a state-of-the art truck, with an aluminum body, four-wheel drive, and a leather interior that would do justice to a Bentley.

“It’s pretty fancy,” says Sutter as we roll through a barbed wire gate into a pasture that stretches as far as the eye can see. “It’s a city boy’s truck. But it drives great. It’s smooth. I wouldn’t kick it out of my driveway.”

Once a humble work tool, the pickup is now a marketplace phenomenon – the F-150 is the best-selling vehicle in North America. Few buyers actually use their pickup trucks to haul things. Instead, it has morphed into an image-building lifestyle accessory and super-sized family car. 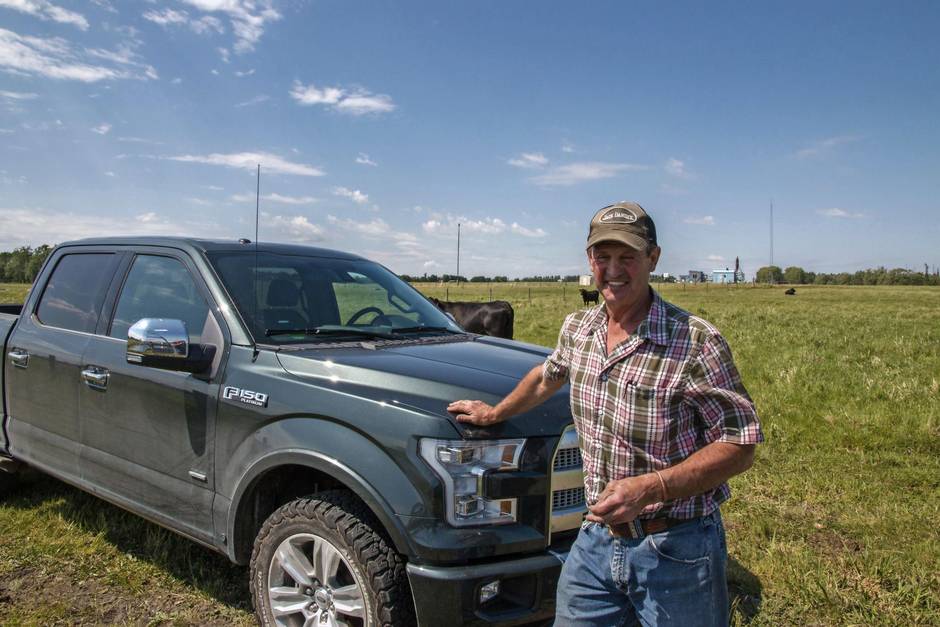 Even in downtown Toronto, the pickup truck is ubiquitous. In Calgary, the truck takeover is even more complete. In the 1960s, pickups in Alberta were generally confined to farms and the oil industry. Not now: polished F-150s and hulking Silverados are everywhere in Calgary, lined up like horses outside a Dodge City saloon back in the days of Wyatt Earp.

Related: The rise of the urban cowboy and the challenges of actually being one

By the looks of it, the pickup truck is Alberta’s Toyota Corolla. At a Calgary restaurant, there are 11 F-150s, three Silverados and a Dodge Ram Hemi parked out front. Five of the F-150s are blinged out with custom wheels and chrome grills, and several have baby seats. At Bow River park, the lot is jammed with full-sized pickups, most loaded with dogs, kids and inflatable kayaks.

Alberta feels like the right place for a truck. Leaving Calgary, the city stops with light-switch suddenness, and you find yourself in a massive, wide-open landscape: the sky hangs over the prairie like the ceiling of a giant blue cathedral, and the jagged grey line of the Rockies crenellates the western horizon.

This is a truck-guy dream. Earlier in the week, I drove the new F-150 through Kananaskis country, a stunning trip deep into the mountains on gravel roads that wound past bear-filled forests, rock walls that reached thousands of meters into the blue sky, and shining, glacier-fed lakes. A kilometre-long contrail of dust hung behind the pickup over the empty road. I was on my own, lost to the world of cell phones and roadside help.

I switched the F-150 into all-wheel-drive mode and pressed on, rolling into Canmore a few hours later. The F-150’s wheels were so coated with gravel dust that it looked like the truck was rolling on four sugar doughnuts. 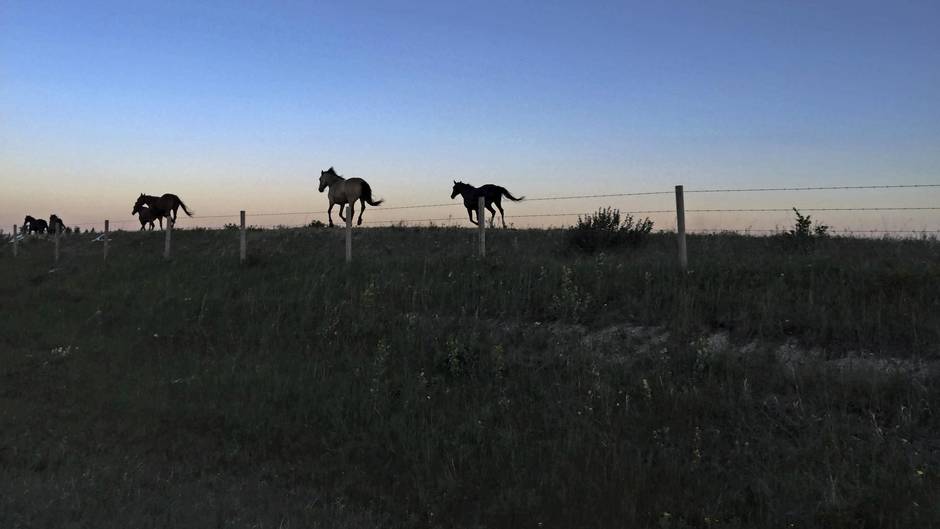 On the way back to Calgary, I stopped by the highway to see a field of horses. The sun was falling, and the horses ran along the fence line, silhouetted against a sky drawn straight from a Western movie. The F-150 was the perfect ride for this trip.

Or was it? I was by myself, and my luggage was limited to a single suitcase and a camera bag. Did I really need a giant vehicle? On the way to the Sutter ranch, I passed the turnoff for Drumheller, a famous paleontological site. And I wondered: what will scientists of the future think if they excavate our civilization? Will they wonder if three-quarters of North America’s work-ready pickup trucks were used as image enhancement devices? Will the Ford F-150 and the Ram diesel take their place next to the stegosaurus and the brontosaurus?

Defending the pickup truck in age of declining resources ventures into the realm of vehicular and moral relativism. It makes no sense to drive a huge, gas-guzzling machine to the daycare and grocery store. But on Sutter’s ranch, trucks aren’t for display purposes. Sutter has three, and they’re flat-out work tools, dented, scarred and lashed together with bailing wire. One is a 21-year-old Dodge. The newest is a 2007 Ram diesel with dual back tires.

These aren’t the kind of machines used to pose outside a Toronto nightclub or assuage doubts about your sexuality. They haul chainsaws, spools of barbed wire and hay bales – or parts for a Lewis Cattle Oiler. Sutter is standing in a pasture next one of the Lewis machines, which looks like an industrial-grade merry-go-round, with massive steel arms and hanging blankets soaked with oil and fly-repellent. 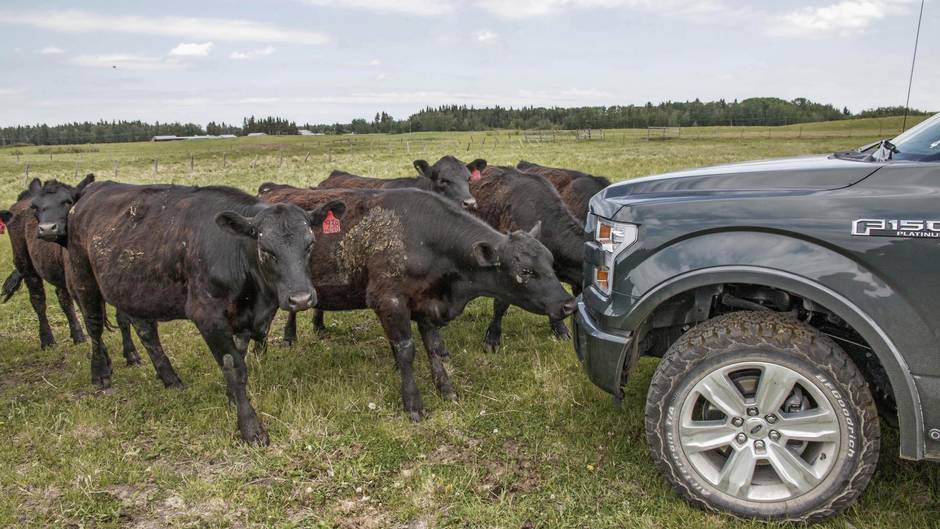 “It works great,” says Sutter as a herd of curious heifers bears down on him. “Without the oiler, the flies would be all over them.”

One cow towers above the rest – it’s a Black Angus bull that weighs as much as a Jeep. Sutter doesn’t seem perturbed. “Just stay calm, and everything will be fine,” he says.

Here’s hoping he’s right. The bull’s head is a giant, anvil-shaped mass of solid bone, and its chest is the size of a walk-in refrigerator. And, as Sutter says, the bull can move faster than an Olympic sprinter.

It doesn’t take long for the F-150 to lose its new-truck sheen. Curious Black Angus heifers press their faces up against it, leaving a smeared kaleidoscope of bovine nose prints. Sutter heads over to another pasture to inspect an irrigation pump. A day earlier, he had to dive to the bottom of a freezing pond to reconnect one of the pump’s hoses. Ranching isn’t for the faint of heart.

By the time Sutter reaches the pump, he’s driven through miles of pasture, forded a stream, and opened and closed half a dozen gates. Then it’s off to look at some young bulls and a feeder system. 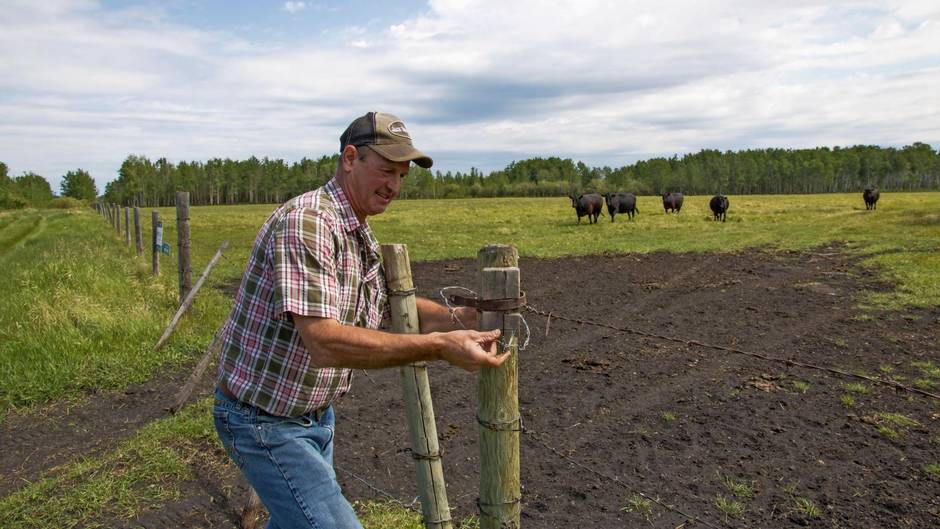 By the end of the day, the new F-150 looks like a ranching veteran, with a patina of dust, mud and cow mucus. Sutter is enjoying the F-150, even though it’s far different than the trucks he normally drives. His ranch trucks use big, low-revving diesel engines. The F-150 is fitted with a small, turbocharged V-6. “It isn’t slow,” Sutter says. “I’d take it.”

Trucks have always been part of Sutter’s life. He was raised on his parent’s ranch in Viking, Alta. He learned to drive in a pickup truck, and practised on concession roads. Even after they became NHL stars, Sutter and his brothers stayed in touch with their farming roots, and still use trucks every day.

The first new vehicle Sutter bought was a red Ford half-ton he purchased with the signing bonus he got from the St. Louis Blues in 1976. But he was embarrassed to drive it around the family farm: “It was all fancy,” he says. “Mom and dad never got new trucks.”

After the NHL signed a sponsorship deal with Dodge, Sutter switched to the brand. His Dodges have been tough and dependable, but Sutter is brand-agnostic.

“There are a lot of good vehicles on the road right now,” he says. “GM, Ford, Chrysler – all of them have come a long way. Growing up, we never had stuff like four-wheel drive. If you didn’t put a load in the back, you were all over the road. Now all the trucks are beautiful, and they work great.” 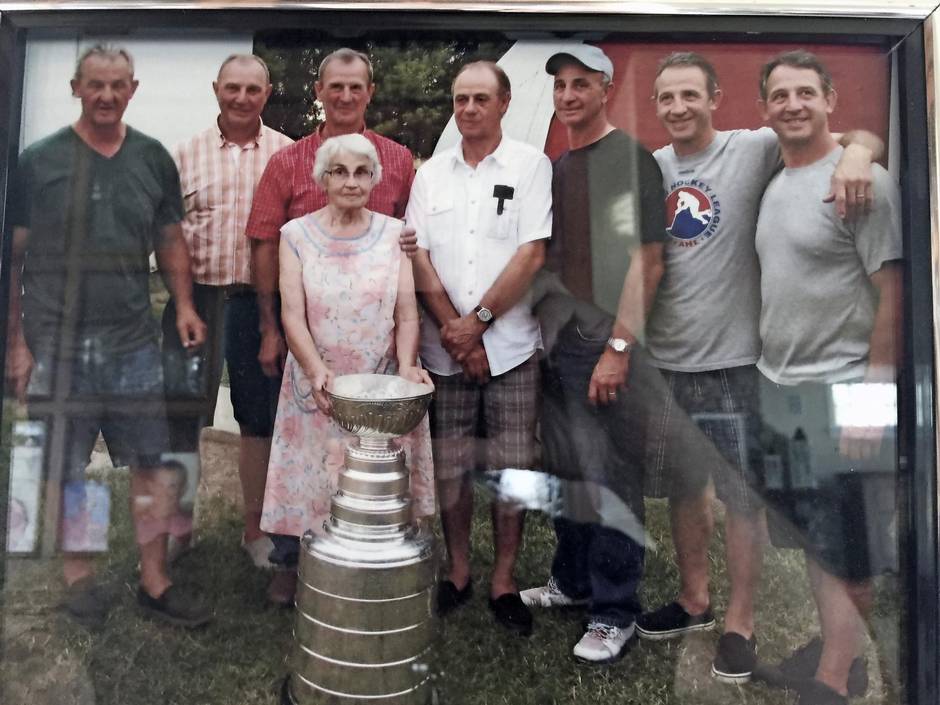 Back at Sutter’s house the next morning, I noticed a small snapshot sitting at the back of a shelf: it was Sutter with his six brothers. Out in front was their mother, standing with the Stanley Cup.

This was the Canadian dream, stuck on a side shelf in a kitchen on the Alberta prairie. “I always thought I was pretty lucky,” Sutter said. “I’m just a farm boy.”