I was surprised to read that you can get an on/off switch for front airbags. Why would you do that? – Barbara W., Toronto

You're safer in a crash with a front air bag than you are without one, Transport Canada says. But you can choose to drive without an air in the world.

"Airbags are proven and effective safety devices … the risk of injury is much greater without an airbag than with," says Natasha Gauthier, Transport Canada spokeswoman, in an e-mail statement. "Airbag deactivation is only intended to be used in extremely rare cases."

Airbags have been required on all cars sold in the United States since 1998. Technically, they're not required by Canadian regulations – but cars sold here have them.

They're designed to inflate quickly – at 300 km/h or faster and in less than 1/20th of a second – if you get into a front-end collision. A crash sensor triggers the inflation system, in which two chemicals – sodium azide and potassium nitrate – react to form nitrogen gas. You get a instant cushion to stop you from accelerating – and hitting the steering wheel and dash.

In the United States, statistics show that airbags reduce the risk of death in a direct frontal crash by about 30 per cent.

But that instant cushion deploys with a lot of force. If you're 25 cm or farther away from the airbag cover, the airbag should be fully inflated by the time you hit it. But if you're closer than that, you could be seriously hurt by the force of the airbag itself. Transport Canada says the risk is highest for the 8 cm closest to air bag – and then the force decreases as it inflates further.

In the United States between 1990 and 2004, 180 children and 114 adults died from injuries caused by airbags in a crash, according to the U.S. National Highway Traffic Safety Administration (NHTSA).

Airbags are designed to work with seat belts – of the adults who died, more than half weren't wearing seat belts.

You can apply to Transport Canada for permission to get an on/off switch. You fill out the form and take it to a dealer or mechanic. They can choose not to do it. But if they do install the switch, you have to sign a disclaimer absolving the garage of any responsibility.

Transport Canada's website talks about making "an informed decision" to get an on/off switch.

So when should you consider getting a switch?

Children under 12 should be okay as long as they stay in their seat belts and don't lean forward, Transport Canada says – but if that's unlikely, then turning off the airbag is an option.

Newer cars have weight sensors that turn off the airbag if an infant or child is in the front seat, but if yours doesn't, you may need a switch.

In Ontario, regulation 613 of The Highway Traffic Act states that children in booster seats (under eight years old, weighing less than 36 kilograms and under 4-foot-9) can only sit in the front if the airbag is deactivated. If kids are still small enough to be in car seats, it's recommended – but not required – to turn off the airbags.

If you have a medical condition or can't sit far enough away: You can say on the form that you can't physically sit with your chest more than 25 cm away from the airbag – or that a doctor has recommended that you get the airbag deactivated.

"A doctor's note is not required," Gauthier says. "However, Transport Canada recommends that individuals with a medical condition that may require the deactivation of an airbag consult their physician before proceeding with deactivation." 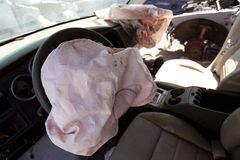