Standing on a street corner in Denmark's capital on a grey winter afternoon, the temperature hovering around freezing, a steady stream of cyclists roll past. The vast majority aren't wearing "gear:" no spandex or padded shorts, not even helmets. There are children on little bikes riding behind their parents, trundling along in separated bike lanes. The traffic lights are synced to the average speed of cyclists so they keep hitting the "Green Wave."

At this otherwise unremarkable downtown intersection, cyclists and drivers have managed to share the road in harmony. What's more, everybody is moving.

"In the mornings, when you're super tired, you can just ride along in the pack. You're surrounded by dozens and dozens of cyclists," says James Thoem, a project manager with Copenhagenize, a consultancy that works with cities to create more bicycle-friendly streets. "Everybody is tired, just looking straight ahead. Nobody is making eye contact. They're bumping into each other, but they just keep going. You see people yawning – and we always say that's a sign of good bicycle infrastructure, yawning, because then you know people feel safe."

Copenhagen is often used as model, held up by urban planners of what a livable, sustainable city looks like. It consistently ranks among the top 10 cities in global livability surveys from Mercer and Monocle magazine, which measure things like transportation efficiency, safety and cost of living.

As Canadian cities and drivers struggle with congested roads and impossible-to-find parking spaces – problems which are only getting worse – can we learn anything from the Copenhagen model? The point there is to get people, not necessarily cars, moving through a city as efficiently as possible. It amounts to a redefinition of what streets are for. Could such a model work in Canada, where, in Toronto, the debate surrounding basic infrastructure such as bike lanes and lower speed limits often degrades into accusations of a "war on cars?" What would it mean for drivers?

"[Copenhagen] isn't pursuing cycling just for cycling's sake, or to be the most bicycle-friendly city. They're doing it because they see it as a serious piece of the puzzle in making a more livable city," Thoem says over coffee at a café near his downtown office, as cyclists ride past on a bridge built just for bikes and pedestrians.

Thoem grew up in Burlington, Ont., and went to school at the University of Toronto, studying urban geography, before moving to Copenhagen and taking a job with Copenhagenize. He's working on a project for the City of Detroit, creating its entire greater downtown bicycle strategy.

He rides his bike to work, as does 45 per cent of commuters coming into Copenhagen on any given day. Among people living in the city proper, 63 per cent of trips to work or school are done by bicycle, according to Copenhagen's 2014 data. And this in a city with one of the worst suburban sprawls in Western Europe.

What most tourists, and even many Copenhageners, don't realize is that the city wasn't always this urban-mobility utopia.

Cars were seen as "vigorous symbols that the Depression of the 1930s and the darkness of World War II had lifted," according to a history by Lotte Ruby on Denmark's official website.

As more families could afford to buy cars, the city demolished cycling infrastructure it had built in the first half of the 20th century to make room for roads and parking. By the mid-1960s, thanks to a postwar economic boom, the roads were clogged with cars. But then a few things happened to bring about a road revolution: a growing number of people were killed in traffic accidents, there was vigorous opposition and protests against new road projects that would have cut through some of the city's most beautiful areas and pollution was becoming a problem. Then, the oil crisis hit Denmark hard in 1973, prompting a new policy focus on energy independence and conservation, including car-free Sundays.

"Gradually, it became clear to most people that the solution to the problems had to be city planning that gave space to cars, bicycles, pedestrians and public transport," Ruby wrote. Copenhagen completely changed its attitude toward cars and bicycles in a matter of decades.

New York is changing rapidly, too. Between 2007 and 2013, while Janette Sadik-Khan was commissioner of the city's department of transportation under mayor Michael Bloomberg, New York built 563 kilometres (350 miles) of bike lanes and repurposed 26 acres of car lanes into pedestrian space.

Today, if you visit Times Square and notice a lack of cars and abundance of public space – that was Sadik-Khan.

Between 2000 and 2014, the average risk of a serious injury for cyclists in New York decreased by 72 per cent, according to the city's data.

Sadik-Khan's work wasn't without controversy. One newspaper called a bike lane she installed in Brooklyn "the most contested piece of land outside of the Gaza Strip."

But just because these particular solutions worked in Copenhagen and New York doesn't mean the same can work in Canada. Toronto has much hotter summers than Copenhagen. New York's public transit system is much more extensive than Toronto's, or Montreal's, or Vancouver's.

Toronto's Bloor Street bike lanes have increased drive times during the afternoon peak by 8 1/2 minutes, according to city data obtained by the Toronto Star.

And the number of cyclists using the road increased by 36 per cent. (The city will tweak the street layout to improve car flow, as it always planned to do once this data was collected.)

Canadian cities present their own unique challenges. A bike lane design that works in Manhattan might not work in Montreal. But the bigger idea from the Copenhagen model could be applied here: a redefinition of what roads are for. They're not for moving cars, but people.

"We don't really have that war on cars rhetoric [in Denmark]," Thoem says. It's about money.

Cycling infrastructure costs less to build and maintain. In Copenhagen, it's the little things that make cyclists feel safe enough to yawn: a five-centimetre curb separating cycle tracks from the road, or a "pregreen" traffic light that gives cyclists a five-second head start at traffic lights.

I cringe at the mere thought of a longer commute. But as drivers, when we're infuriated by rush-hour traffic or an empty bike lane, we forget how easy we have it commuting in our high-tech automobiles. We sit there in a climate-controlled comfort with plenty of personal space, listening to the radio or a podcast, protected from the elements, going directly from door-to-door.

"Think of the numbers," Thoem says. "Think of savings to the province and city in investing in cycling infrastructure. Think of the fewer people that will be travelling by car or transit, instead getting onto their bikes. And think about the value it creates in the city. … It identifies a city as a place worth moving to and worth investing in."

The United Nations estimates that 54.5 per cent of the world's population lives in urban areas, as of 2016. By 2030, it estimates that figure will rise to 60 per cent.

Cities are only going to get more crowded.

"In an ideal world, there is enough room and space in the urban fabric of this city for everyone to own a luxury vehicle and travel with a latte and some loud music," Toronto's chief city planner Jennifer Keesmaat said. "You have a limited amount of capacity in the road right-of-way and cars take up a lot of space, a tremendous amount of space in comparison to a streetcar or a subway or even pedestrians or cyclists."

In other words, we've run out of space. Either more bicycles and buses clog the roads, or many more cars do. Either way, commuting by car is going to take longer. Like Copenhagen in the 1960s, we're at a tipping point. 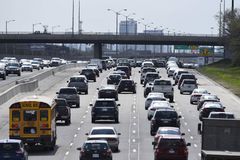