Warren Buffett had a pretty good year in 2016. The world's greatest value investor boosted his personal fortune by about $12-billion (U.S.) and expects 2017 to be even better for his brand of patient, fundamental investing, regardless of what policies Donald Trump ends up pursuing.

The contrast between the highest of high-net-worth investors and the U.S. president-elect of uncertain wealth couldn't be greater. For one thing, Mr. Buffett, a Hillary Clinton backer who excoriated Mr. Trump for failing to release his tax records, already believes the United States has the world's greatest economy.

The world's second-richest man also says that to lead the life he wanted, he didn't need to make any more money beyond the $200,000 he had accumulated by the age of 25, something we would never have heard coming from the lips of the high-living Mr. Trump.

Then there's the crucial difference in the way they absorb information. Mr. Trump has an aversion to reading policy papers, has acknowledged he's too busy to read many books and is reputed to have a short attention span. Mr. Buffett does his own painstaking research, has a prodigious memory and has been a voracious reader of everything he could get his hands on since childhood.

It's part of the obsessive nature that sets the Oracle of Omaha apart from most other investors. He frequently taps what one biographer called the "library" in his brain to help him make important financial decisions. Studies have shown the bulk of high-net-worth people read far more than the average investor. Mr. Buffett just takes it to a different level.

Asked once to explain the key to success, Mr. Buffett pointed to a pile of books and declared: "Read 500 pages like this every day. That's how knowledge works. It builds up, like compound interest. All of you can do it, but I guarantee not many of you will do it."

That, in fact, would be a slow reading day for the 86-year-old, who used to typically inhale up to 1,000 pages daily and still spends a big chunk of his time devouring newspapers, magazines and books.

The teenage Warren plowed through every book in the Omaha public library on investing and stocks. By the time he took David Dodd's class on investing at Columbia University, he had already pretty much memorized the course textbook, Security Analysis, the complex 1934 classic co-written by Mr. Dodd and Benjamin Graham, the father of value investing and Mr. Buffett's future mentor.

Mr. Buffett, who wrote a foreword to the sixth edition in 2008, described it as "a road map for investing" he has followed his entire career. But when it comes to financial advice, his favourite book, by far, remains Mr. Graham's The Intelligent Investor, which he read at the age of 19, when it was first published in 1949, and has reread many times since.

Further distilling his thinking about the market in the years since he was essentially wiped out by the crash of 1929 and the ensuing bear market, Mr. Graham preached investors should think more like owners than traders when evaluating a company and its prospects, make sure the price includes a margin of safety, avoid trying to time the market and never sell when the herd stampedes for the exits.

"Chapters 8 and 20 have been the bedrock of my investing activities for more than 60 years," Mr. Buffett told Forbes in 2013. "I suggest that all investors read those chapters and reread them every time the market has been especially strong or weak."

As for other well-thumbed books on Mr. Buffett's shelves, we can thank Business Insider for poring through two decades' worth of public comments and letters to shareholders to come up with a fair-sized list.

They include two books by Jack Bogle, another investing legend – The Clash of Cultures (2012) and The Little Book of Common Sense Investing (2007). Mr. Buffett shares the Vanguard founder's disdain for speculators and his unwavering advocacy of passive index investing.

Another classic is Common Stocks and Uncommon Profits, penned in 1958 by early growth-stock guru Philip Fisher and reissued in 2003 with a cover blurb by Mr. Buffett.

Of more recent vintage is former U.S. Treasury secretary Timothy Geithner's Stress Test. The 2014 door-stopper is one of the better insider accounts of the 2008 financial meltdown.

William Thorndike Jr.'s The Outsiders: Eight Unconventional CEOs and Their Radically Rational Blueprint for Success is an influential 2012 book that has become a darling of activist investors such as Bill Ackman. Sure, Mr. Buffett happens to be one of the unconventional eight, but that's no reason to dismiss it.

A flourishing Buffettiana industry churns out books delving into everything from his methods, core values and influences to his famed missives to shareholders. This past year alone, we got Warren Buffett's Ground Rules; The Life and Business Lessons of Warren Buffett; and an updated version of Warren Buffett: Investing & Life Lessons On How To Get Rich, Become Successful & Dominate Your Personal Finance From The Greatest Value Investor Of All Time, which was first published just the year before.

None is on any must-read lists for 2017. But you will find the fourth edition of The Essays of Warren Buffett there, a fat collection of his letters and notes over the course of a remarkable career.

Mr. Buffett has touted the memoirs of business leaders he admires, such as former General Electric honcho Jack Welch. But he has not said if he ever read Mr. Trump's 1987 bestseller, The Art of the Deal. Based on the ghostwriter's comments during last year's election campaign, it's possible Mr. Trump didn't either. Can a factor-based strategy emulate styles of Buffett and Soros?
December 15, 2016 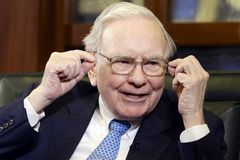 Buffett, Soros and the role of robotic logic in investing riches
December 7, 2016
Follow Brian Milner on Twitter @bmilnerglobe
Report an error Editorial code of conduct
Due to technical reasons, we have temporarily removed commenting from our articles. We hope to have this fixed soon. Thank you for your patience. If you are looking to give feedback on our new site, please send it along to feedback@globeandmail.com. If you want to write a letter to the editor, please forward to letters@globeandmail.com.
Comments