It’s no longer a probability, it’s a reality: the escalating U.S.-China trade war and the strengthening dollar appear to be inflicting measurable damage on U.S. goods makers that rely on global markets.

Market participants will get a picture of the extent to which trade tensions and currency have hurt U.S. manufacturers when the Institute for Supply Management (ISM) releases its purchasing managers index (PMI) for September on Tuesday.

Its August report showed the manufacturing sector, which accounts for about 12 per cent of the U.S. economy, contracting in for the first time in 3 1/2 years, and more worryingly, its export component hit a more than 10-year low.

“The exporters are at least a half a step or full step closer to the predicted recession,” said Robert Pavlik, chief investment strategist, senior portfolio manager at SlateStone Wealth LLC in New York.

The August report’s New Export Orders plunged to 43.3, its lowest level since April, 2009, when the United States was in the throes of the great recession.

A PMI reading below 50 indicates contraction.

In the August PMI survey, manufacturers told ISM “business is starting to show signs of a broad slowdown,” and that “tariffs continue to be a strain on the supply chain and the economy overall.”

China already has implemented tariffs on about US$110-billion in U.S. goods, in return for U.S. President Donald Trump’s tariffs on Chinese imports. Beijing announced additional retaliatory increases in August. The first tranche took effect at the beginning of this month and the second is due to follow on Dec. 15.

U.S. goods would already be more expensive on global markets because of a stronger dollar, which has been boosted by simmering geopolitical unease and negative interest rates in Europe. Market-rattling tit-for-tat tariff hikes from Washington and Beijing have created a perfect storm.

“Geopolitical tensions do two things,” said Peter Tuz, president of Chase Investment Counsel in Charlottesville, Va. “They compel big companies to sit back and not spend as much as they would.

“And as tensions increase and the dollar rises, [U.S.] products become more expensive and you see demand fall off.”

The dollar index, which measures the greenback against a basket of major world currencies, hit a 29-month high on Sept. 3, the very day ISM released its dismal PMI report.

Indeed, in the first quarter of 2018, during which Mr. Trump fired the opening salvo in the trade war, the negative currency impact on North American corporate earnings was an estimated US$40-million, according to cloud treasury services firm Kyriba. One year later, that number ballooned to US$23.4-billion.

The arrival of third-quarter earnings season next month will provide a clearer view of the damage the trade war and strong dollar have wrought on companies’ bottom lines.

Over the past year, third-quarter analyst earnings estimates for a basket of 15 top U.S. exporters by dollar value have dropped by an average of 17.3 per cent, according to Refinitiv data, and by 12.3 per cent in the past three months.

Fourth-quarter estimates for the same companies have been revised down 15.6 per cent on average since September, 2018, by 10.3 per cent since June.

Third-quarter earnings estimates for Apple Inc are 7.4 per cent lower than they were a year ago, and down 16.7 per cent for the essential October-December holiday quarter. Non-U.S. revenue contributes 63.1 per cent of the iPhone maker’s total.

General Electric Co. gets about 61.5 per cent of its revenue from abroad. Analysts currently see the conglomerate’s third-quarter earnings coming in 44.6 per cent below the level seen a year ago, and its fourth-quarter EPS estimates are now 43.5 per cent lower.

Micron Technology Inc. relies on non-U.S. business for 88.1 per cent of its revenue. Third-quarter earnings estimates for the company have plunged 83.4 per cent over the past year and 42 per cent from last quarter.

Overseas customers contribute 97.4 per cent of Qualcomm Inc.’s revenue. Analysts have slashed their third-quarter earnings estimates for the company by 47.7 per cent over the past year.

Nike Inc., which derives 62.5 per cent of its revenues from overseas, reported its first-quarter earnings for fiscal year 2020 on Tuesday. The sportswear company’s revenue and profit beat analyst estimates, but it said currency and trade concerns remained headwinds and it expects the impact of tariffs will be “most pronounced” in the current quarter.

“The manufacturing side of our economy is in the early stages of a recession and we should be concerned about the possibility of a full recession spreading here and around the world,” said Tim Ghriskey, chief investment strategist at Inverness Counsel in New York.

“If [the ISM PMI] export number remains weak, that will point to deepening overseas weakness,” Mr. Ghriskey added. “But a strong number would surprise me given what’s happening around the world.” 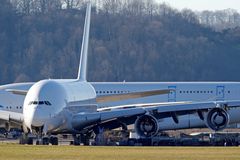 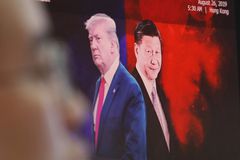 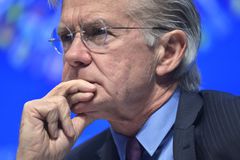