Having been diagnosed with type 2 diabetes in 1986 at the age of 35, Clint Davies has always tried to exercise and eat right, aware of the heightened risk of heart disease associated with diabetes.

His mother had type 2 diabetes and died of a heart attack at 66. When Mr. Davies was the same age and awoke on Easter Sunday in 2018 to discover he’d had a stroke during the night, the retired millwright in Estevan, Saskatchewan, was “shocked but not surprised.” He recovered well from the stroke, which doctors said was caused by a blocked artery in the back of his neck, but he’s ever mindful of the toll that diabetes could be taking on his cardiovascular system.

Heart Month (February) is a good time for all Canadians to be aware of the increased risk of such complications in people with type 1 and type 2 diabetes. They’re more prone to atherosclerosis, the build up of fatty plaque on artery walls, which can restrict blood flow to organs and tissues and trigger a heart attack or stroke – often with no prior signs or symptoms.

“The vast majority of deaths in people with diabetes are caused by cardiovascular disease,” says Erin Mulvihill, a scientist at the Ottawa Heart Institute and assistant professor in the Department of Biochemistry, Microbiology and Immunology at the University of Ottawa. Her lab, funded by a New Investigator Award from Diabetes Canada, is researching how inflammation contributes to blood-vessel damage in people with diabetes, and how new classes of diabetes drugs may offer protection from these vascular complications. 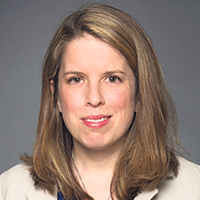 “All the traditional risk factors act together in different measures to raise the incidence of cardiovascular disease in people with diabetes, including elevated blood pressure, high cholesterol, obesity, decreased physical activity and smoking.

Erin Mulvihill
Assistant professor in the Department of Biochemistry, Microbiology and Immunology at the University of Ottawa

Dr. Mulvihill says that “all the traditional risk factors” act together in different measures to raise the incidence of cardiovascular disease in people with diabetes, including elevated blood pressure, high cholesterol, obesity, decreased physical activity and smoking. “Having diabetes is being on a spectrum,” she says, noting that diet, exercise and constant monitoring by patients are critical to stay on top of this chronic condition.

Her research focuses on therapies based on gut hormones that help the body absorb and use the nutrients in food. These appear to reduce cardiovascular complications while promoting weight loss and helping glucose management in people with type 2 diabetes.

She says the key is to “unravel what molecular circuits are engaged by these therapies” in order to protect the heart. “We hope to uncover mechanisms that can inform us about how to safely target some of these pathways,” Dr. Mulvihill says, which could, in the long term, lead to new treatments and simplified home care for people with diabetes.

It’s critical to invest in all types of diabetes research. The discovery of insulin 100 years ago was an “amazing scientific breakthrough” that brought the ability to manage glucose levels and “changed the fate of people with diabetes in the whole world,” Dr. Mulvihill comments. “Sometimes, we need to think creatively.”

The need for continued discovery is not lost on Mr. Davies, who is a long-time volunteer for Diabetes Canada. He is grateful for the developments in diabetes management and treatment stemming from research supported by the organization. He worries about the effect of diabetes on his heart and hopes one day to be able to benefit from therapies that reduce the cardiovascular risks from the disease.

“The research has really advanced since the early days,” Mr. Davies says. “But there’s still a way to go.”