Each winter, tens of thousands of harp seals gather on the pack ice around Quebec’s Magdalen Islands, an archipelago in the Gulf of Saint Lawrence. What makes this natural migration even more extraordinary is that it’s accessible to travellers. With just a short helicopter flight, visitors can be on the floes up close to the animals. It’s an experience unique to this part of Canada.

The excursion draws visitors from around the world, including Jennifer Hayes, a contributor with National Geographic magazine, who has been visiting the islands since 2011 to document the seals.

Each visit is memorable, she says, but three years ago, she witnessed a rare sight.

“I noticed a female making large rapid circles on the ice in the distance and I slowly made my way toward her,” she recalls. “The seal made a few complete circles and during that movement she birthed a pup.”

Seeing the reaction of visitors meeting a harp seal pup for the first time is extraordinary, she says. “I have seen tears of gratitude, screams of delight, stunned silence and reverence, but mostly, I see joy.”

The pups are tolerant of people which make them co-operative subjects for photographs. “Harp seal pups have cloud-soft fur and large obsidian eyes large enough to reflect your own image like a mirror,” says Hayes.

Be patient when you spot a pup, she advises. Lay a distance away to watch, wait and listen. The seals won’t flee unless you approach them too quickly, so there’s time to get great photos.

“Harp seals are one of the most endearing mammals on the planet and they look like plush toys,” says Hayes, “but it is the sound that of their cries carried across the ice by the wind that will catch you off guard.”

Château Madelinot in Fatima, Que., offers travellers a special, all-inclusive winter package, including the trip by helicopter to the seal herds, use of a Mustang flotation suit and a guide, plus meals, accommodations and additional excursions. The journey to see the seals has been offered by the hotel for 45 years.

Aside from guests wishing to see the extreme cuteness of the fluffy, white-furred babies, they increasingly have an interest in learning about climate change.

Over the last five years, the ice in the area has become less stable, forcing the seals to move to new locations that make them more vulnerable to predators. The Magdalen Islands are also facing a crisis with the rate of shoreline erosion doubling since 2005.

“People want to see the impact of climate change for themselves,” says Ariane Bérubé, property sales, marketing and communications director of Chateau Madelinot. “Here in the middle of the gulf, it’s the best place to learn more about it.”

“ They are a symbol of a healthy eco-system. Right now, the numbers are the highest we’ve seen in about 100 years.” 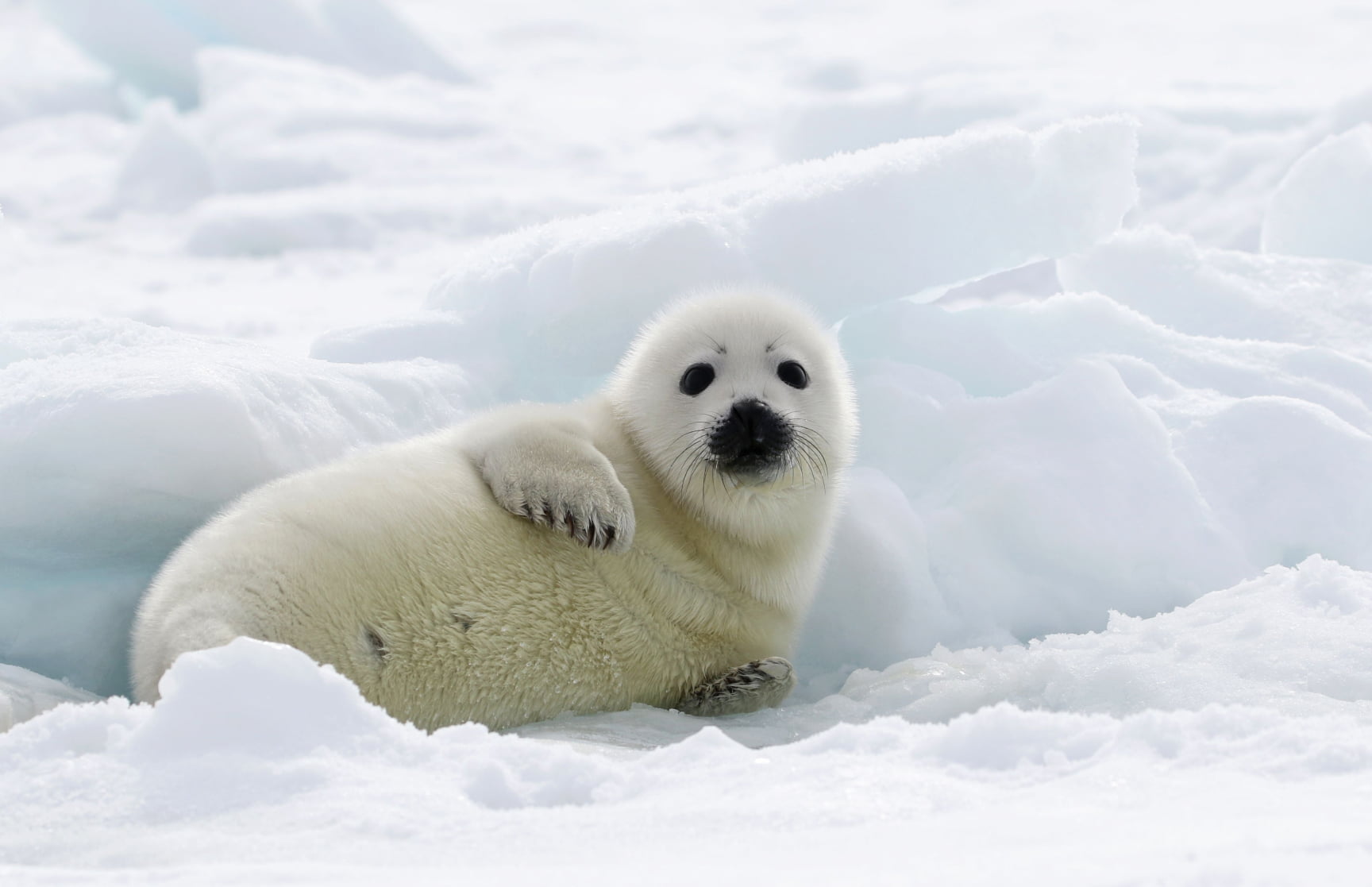 Like adult harp seals, the plush-like pups are known for their vocalizations, including a call known as bawling, to attract their mothers when they are hungry. The rise in ocean temperatures impacts the ice formation, severely threatening future populations.
REI OHARA 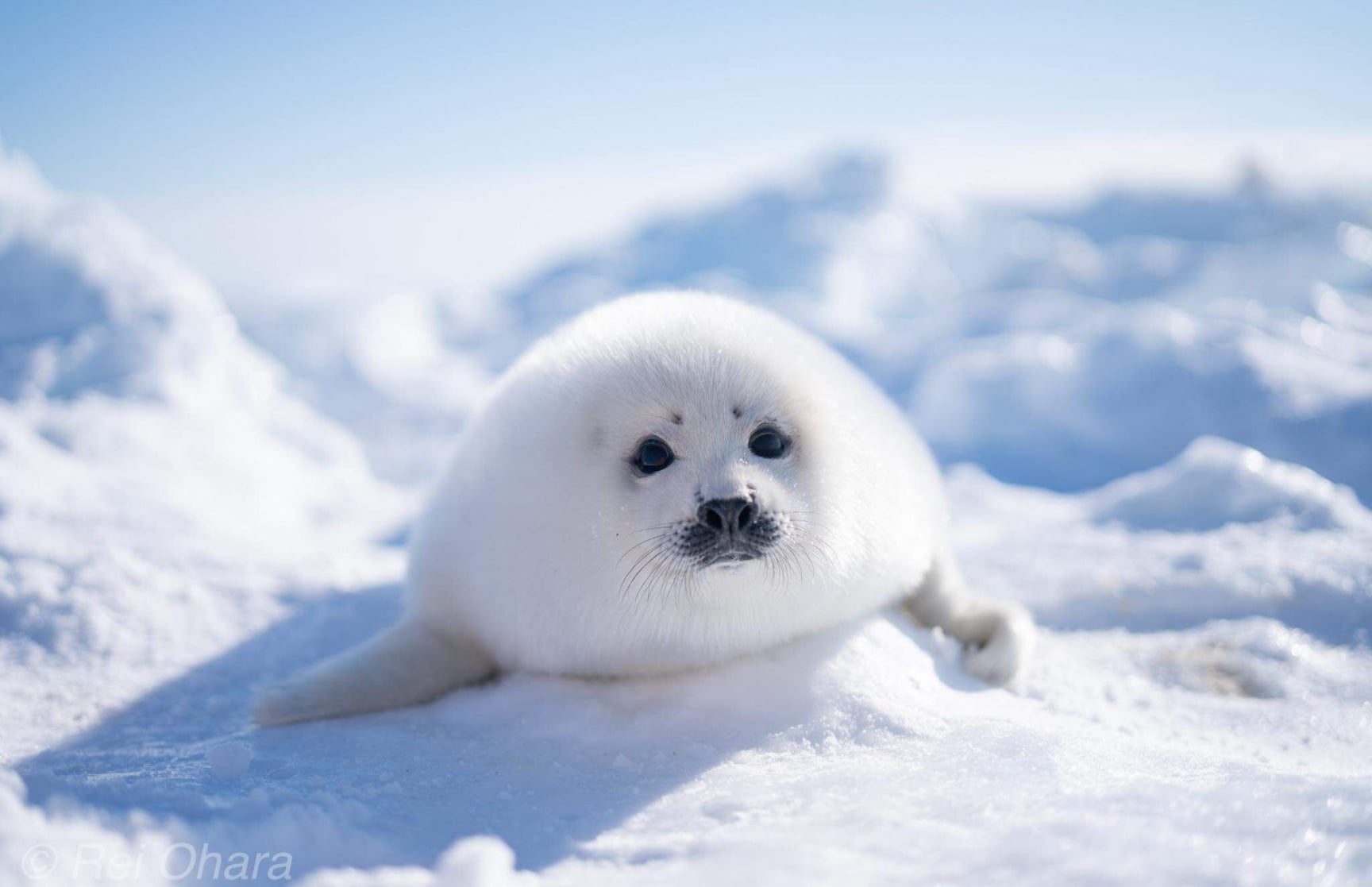 Visitors can listen to lectures from experts at the hotel or venture further to the Seal Interpretative Centre in Grande-Entrée to learn more about the seals, their habitat and historical, scientific and ecological significance, but the high point is always being able to spend time on the ice with the seals.

“I’ve seen many guests cry when they see the pups,” Bérubé says “or they are totally speechless [because] they are so moved. The pups are very cute, very playful and curious.”

Seeing how climate change impacts wildlife, like the 7.6 million harp seals inhabiting the waters from Eastern Canada to Greenland, the world’s largest population, can help visitors better grasp the devastating impacts of the crisis.

“[Harp seals] are a symbol of a healthy eco-system,” says Mike Hammill, a biologist with the Department of Fisheries and Oceans, who has been researching harp seals since 1989. “Right now, the numbers are the highest we’ve seen in about 100 years, but we’ve found the females also are a bit smaller and thinner than they have been, which shows there’s competition for food.”

He frequently travels to the Magdalen Islands to study the animals, weigh them, track their movements and take milk samples from the mothers who come to give birth, starting at the end of February. The area is ideal because the islands offer stable ice where the babies can develop their strength before they’re ready to head into the water to feed.

“The sheer numbers are pretty amazing,” he says. “There are times when I’ve been surrounded by more than 50,000 harp seals.”

Travel writer Brandon Withrow from Perrysburg, Ohio, visited the harp seals in 2020, also to see the effects of climate change of their population. “Once we landed on the ice floe, it took very little time before we were face to face with the harp seal mothers and pups,” he says. “I wanted to just soak in the surrealness of it. I had to keep reminding myself to take photos.”

He made a new friend that day. “A small pup that had hidden behind some ice, poked its head out and waddled closer my way,” he recalls. While others in his group were congregated elsewhere, he and the pup had time to study each other. “I’m sure it was probably wondering what this ape in an orange [flotation] suit was doing on his ice.”

Withrow feels lucky to have had the experience. “We can all see many of these animals in captivity somewhere, but when it is in the wild, it is unforgettable.”