It’s a good thing there’s a twilight showing of Aura, the dazzling new sound-and-light show in the historic Notre-Dame Basilica. How else could I admire so many of Montreal’s luminous wonders in a single Friday evening?

During Aura’s introductory walk-through, dozens of projectors enhance the Gothic Revival high altar, choir stalls and soaring vault festooned with angels and stars. Christ’s radiant heart is striking enough in an oil painting, but when it starts glowing and then beating — complete with audio effects — my own pulse ticks up a notch.

This ticking turns into more of a whir soon after I take a seat in the pews. Spotlights direct my attention toward works of art, and then, as the orchestral music swells, the vault suddenly morphs into a giant glass dome mottled with falling leaves and dancing snowflakes. The storms of spring dramatically conclude the seasonal second act, with rising waters appearing to inundate the Basilica and then shatter the glass ceiling projected high above. My head feels like it’s on a swivel when dozens of laser beams shoot from the back of the nave and the 10-metre-tall Casavant Frères organ unleashes its 7,000 pipes.

My senses are still buzzing as I step out onto the cobblestones of the Place d’Armes, where the triumphant Maisonneuve Monument and the Pantheon-esque Bank of Montreal Museum are also bathed in floodlights.

But after seeing what projection-mapped images, lasers and sensor-equipped screen arrays can do — more on the latter in a moment — I’m now in search of cutting-edge radiance. Two centuries after tens of thousands of gas lamps transformed Paris into the City of Light, it seems Montreal’s historic buildings, restaurants, spas, public gardens and works of art are updating, and perhaps commandeering, that nickname.

My Friday mission starts just before the 45-minute Aura experience. En route to the basilica from my suite on the 34th floor of the Marriott Château Champlain — itself a superb spot for admiring downtown’s sparkling skyline — I stop at the nearby Maison Manuvie to check out Colorimeter, an enormous new panel of screens overhanging the office tower’s glass-walled foyer. A camera-generated sea of colour washes over the 500 luminous rectangles — the work of Mexican-born Montreal artist Rafael Lozano-Hemmer — and when a digital brushstroke of blue appears I wonder whether my sweater has become part of the show.

I swap the sweater for a terry-cloth robe before sitting down to beef tartare and a lychee martini at Strom Spa, a 15-minute cab ride south on bucolic Nuns’ Island. The monthly “Friday Under the Stars” event is just getting under way at the Nordic-inspired collection of outdoor pools, waterfalls, saunas and steam baths, which becomes even more alluring when bathed in shimmering blue light. A few relaxing circuits later, it’s lights out for me when I conclude my evening with a 60-minute Swedish massage.

Sunsets have a warning light of sorts in Montreal thanks to Living Connections, the interactive lighting display that went live in 2017 on the Jacques Cartier Bridge. Like Aura, the $39.5-million project is the work of the local design studio Moment Factory, which seems to have turned much of the city into its own laboratory.

Gazing north toward the 2,725-metre-long cantilevered span from the base of the Sailors’ Memorial Clock, I’m starting to think the batteries have run out when twilight-detecting sensors finally activate the LED- and floodlight-based display. I admire a dancing green spectacle that, according to Moment Factory, will turn to orange, red and blue as the seasons change. Each night’s unique show is also apparently linked to the Internet and social media, with Twitter posts using the #illuminationMTL hashtag, news stories and weather reports affecting the performance. This being a spring Saturday in Montreal, I’m not surprised all those glittering green lights won’t stop dancing.

The illuminated diversions are even more plentiful at other times of the year. In February there’s Montreal en Lumiere, a 10-day celebration of gastronomy, performing and visual arts, and general merriment encompassing 40 square kilometres of the city’s namesake island. The dozens of installations comprising its “Illuminart” series, for instance, fuse the work of artists, engineers, set designers, graphic designers and videographers. Summer brings the L’International des Feux Loto-Québec pyrotechnics competition to the skies around the La Ronde theme park, while the autumnal Gardens of Light sees the Montreal Botanical Gardens blaze with Chinese-, Japanese- and First Nations-themed splendour.

The sensory pleasures of my glowing spring weekend aren’t finished just yet. On the way back to the Marriott, I spot a lineup forming outside the Place Ville Marie. I join the queue and am eventually rewarded with an elevator trip to the newest outpost of the Les Enfants Terribles chain of stylish restaurants, this one filling the skyscraper’s 44th floor.

I make my way out onto the enormous glass-walled outdoor patio to conclude my Saturday with head-spinning views of the surrounding cityscape. I glance down to stir my cocktail, and wouldn’t you know it? A pair of LED ice cubes are lighting up my Moscow Mule. 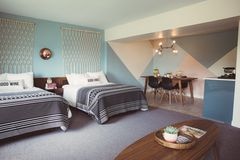 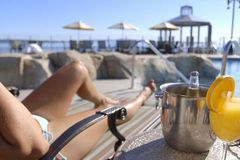