For the fortunate few, there is the kind of grandmother who delights in the little things in life, who was meant to love children, who is your best friend. I had such a grandma.

Granny Clayton was a modest woman. She never had a lot of money, but she always had a few coins in her pocket that she would use to delight a small child if the opportunity presented itself. She was the kind of woman who would take her grandchildren to the local diner counter and let them order a banana split for lunch.

Gramma died in 1990, a month after her 75th birthday. I was 29 and nowhere near ready. You can never be ready to lose your best friend.

I visited her in the hospital when she was ill, watched the nurses moving outside her room, saw the anguish on Granny's face. I had brought her a gift, and she tried to explain to me that my sister would like it and I should give it to her. I wasn't listening, protesting that the gift was for her and it would be waiting for her when she got home. But she knew she wasn't going home.

After the funeral, my mother showed me a crumpled bag with a bundle of lace bunched up between skeins of crochet cotton. "She'd been making this for you, was very anxious to get it done."

But neither my sister nor my mother could figure out the complicated pattern, and I don't know one end of a crochet hook from the other. So it remained balled up in a plastic bag, tiny unfinished threads that seemed to me like an uncompleted life.

Years later, I retrieved the bag from my mother's house, opened it and tried to make sense of the pattern. What had Granny meant by it? Where were all those threads supposed to go? Like the threads of my memories - the little things she had done for me, the way she had delighted in the smallest pleasures and how she made me feel special, surely the job of any good grandmother - where did all those go? It seemed imperative that this tribute be finished.

I asked around, but no one seemed to know how to crochet any more. A dying art, like so many things that take time and skill. So the lace went back into the bag and into a cupboard in my dining room.

Last year, on a vacation to Britain I met a wonderful woman who happened to live in Oshawa, Ont., only 10 minutes from my house in Whitby. When we returned from the trip we became friends and she invited me to events at her church and within the community. I gave her the tablecloth and asked if she could crochet. She couldn't, but she asked if she could keep it for a while.

Two weeks later, I got a call from Diane. She said that her friend Thelma had been moved by the story of how desperately my grandmother had tried to finish the tablecloth, and she had taken it home to complete it herself.

Thelma is a lovely elderly woman living in Oshawa. I went to see her to pick up the tablecloth and see what it looked like. What I found was an intricate pattern of lace, like snowflakes fitted together, stretched out to make a delicate covering for my antique wooden table. It was real, it was alive and it was what Gramma had intended. As if a piece of her had returned to me.

Thelma touched it lovingly with her fingers, and showed me the places where the cotton had unravelled, no doubt from being carelessly tossed into a plastic bag and left in a cupboard for years on end. She had repaired it where she could and tied in all the loose ends. It was as if she had also repaired the wound in my heart where my loss still lived.

I thanked her profusely. The plant I had brought her as a gift could not begin to express my gratitude.

Thelma sat at the kitchen table, smiled sadly up at me and told me she had worked on this piece every night for two weeks. She could picture my grandma, staying up nights, working all day, trying to get it done before she died.

Thelma's own husband had recently passed away. "The nights are the worst, when I have nothing to do, and his absence is the hardest," she said. "But working on this made me feel as if someone were here with me. I was proud to finish it for her."

I felt the connection, not only to my own grandmother, who had so wanted to leave me something, but to the sensitively of a grieving woman who knew something important about the spirit and what it leaves behind.

Thank you Granny. And thank you Thelma. For reaching across a generation and into my heart. 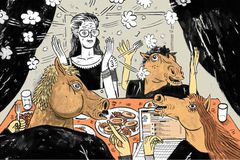