Mona Rasmussen
Contributed to The Globe and Mail
Published January 1, 2014 Updated May 11, 2018

A few weeks after arriving home from China, I went to the mall with my newly adopted daughter, Grace.

It was midday, so after walking around for a bit we headed to the food court to get a bite to eat. I settled at a table while Grace sat in her stroller facing me. At the table next to us sat a man who was talking on his cellphone.

He was Asian and speaking Mandarin or Cantonese loudly enough that if I had understood the language, I would have been able to follow his half of the dialogue.

Grace had her back to him, but clearly she was drawn to the man's voice. Although she was only 11 months old and had not yet spoken a discernible word in either English or her native language, she turned to try to see this man who was speaking her mother tongue.

She turned the way a flower turns toward the sun.

I can remember the look on her face that day so very clearly – a look of utter surprise, to recognize these sounds that she had not heard for more than a month, since we brought her to Canada, and to realize only then that she'd missed them in some way.

I don't know if what I saw in her expression was longing, but there seemed to be a flutter of her heart behind that look of wonder.

I picked her up out of her stroller and put her on my lap so she could more easily see this man who was still talking on the phone. And I watched as my daughter continued to stare at him.

There is a French word, dépaysement, that describes the feeling that comes from not being in one's home country – a disorientation, particularly when one travels. I wondered if that was what I saw on Grace's face that day.

Maybe, at that point in her infant life, she still hadn't fathomed that this was now home for her. Perhaps she hadn't yet processed the fact that the familiar sounds of her birth country would soon sound as foreign to her as they did to me. And maybe, hearing her birth country's language had brought on a sudden feeling of not knowing where she belonged.

I wondered if, when someone leaves their home country permanently through immigration, that feeling of disorientation ever goes away entirely. I'm not sure it has for me. It's been 46 years since my family immigrated to Canada from Egypt.

The other day I received a phone call from my aunt in Montreal with whom I hadn't spoken for several years. It had been that long since I'd heard my mother tongue. Conversations with my aunt have always been a mingling of English and Arabic.

My aunt is an animated lady who speaks fast, and when she called me that day and began switching back and forth between languages, sometimes three or four times in one sentence, I worried I would not be able to keep up. It had been so long since I'd heard this specific dialect of Arabic. But I did. Even if I didn't understand every word, I followed along and understood what she was saying. But when I answered her questions I spoke only in English.

I even found myself smiling as I listened to my aunt speak because it stirred in me a particular type of happiness to hear and understand this language – something I could claim as evidence of a home I can only know now in some almost inaccessible way. But it's there, somewhere deep inside me, in the part where I try to understand my place in the world.

I recognized my own turning toward the sun.

In this way, I share something fundamental to who I am with my adopted daughter that I don't share with my two biological children, born and raised in Toronto.

When Grace was old enough, we put her in Mandarin classes so she could hang onto that part of her heritage, but we soon realized that without the language being spoken at home, it was near impossible for Grace to remember the vocabulary taught from one class to the next.

More recently, Grace completed a psycho-educational assessment to help us understand more about her individual learning styles. The testing revealed that it is difficult for her to learn a new language.

I promised on the day we stood before officials in a government building in Beijing that I would raise this child to know something of her heritage, and I feel a burden of guilt now, knowing that preserving her language will not likely be part of that.

Some time this year we plan to take Grace back to China, to see as much of the country as we can in a two-week period and maybe to visit the orphanage where she stayed for the first 10 months of her life.

It will likely feel as foreign and unfamiliar to her as to any other traveller. And though I'm hoping that while we're there something inside her will stir with recognition, I'm also hoping she never struggles to understand her place in the world.

Facts & Arguments
I tried to teach my four-year-old about Nelson Mandela
May 11, 2018 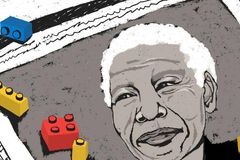 Facts & Arguments
Years as an English teacher have left me with anti-social nitpicking disorder
May 11, 2018 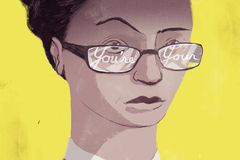