The end of my first career began while I was sitting at my dying father's bedside in a nursing home.

My father had been ill for a long time, and the caregiving – on top of career and family responsibilities – was taking its toll.

But it was clear that night, as I sat holding his hand and telling him how much I loved him, that he was leaving us soon. And then my BlackBerry vibrated, just like it did 200 or 300 times every day.

I was a deputy minister, hired to respond 24/7 to the needs of the bureaucracy. That night's e-mail was sharp and needed quick attention if I wanted to avoid the sharper ones that often kept me awake at night.

My Pavlovian reaction was to start working. As I started to type, I looked down at my dad, who was staring at me – or staring past me; it was hard to tell, but it cut me to the quick. Here I was, sitting beside my beloved dying father, about to respond to a work e-mail, just like I did every day, evening and weekend, for a job I didn't even really like. I was so programmed to work, to avert crises, to avoid getting into trouble for those crises, that for a brief moment this made sense.

It was a shocking moment, and it knocked the wind out of me. After passing the issue to a capable colleague, I turned off the BlackBerry. I didn't realize it then, but with that simple act I was reclaiming something I had forgotten about for a long time: choice.

My personal life and my professional career were my choices to make, I realized: It was nobody's fault but my own that at 50 I found myself in a career where I appeared to be flourishing but was, in reality, withering away, sick and stressed, bitter because I had not followed my dream of being a writer.

But everyone said that writers didn't make a living, and wasn't it pretentious to think I might be one of the few that could?

My father's experience of growing up during the Depression, only to face inflation and 17-per-cent mortgage rates in the 1970s, greatly influenced my choices in 1981.

I pursued a "practical" degree in sociology and continued to write in my 20s, even going so far as to submit a novel I'd written for middle-grade children to a couple of publishers. One even said they loved the book, and if they weren't already publishing a middle-grade series they would be picking it up in a heartbeat. They asked if I would send them something else in the future.

But I didn't send them anything else – I put the work in a drawer and went out to make a "real" living. I put aside my dream because I was too shy to call myself a writer and too worried about what others would think if I tried and failed.

But there was a price to pay for that. Despite ongoing professional success, I tended a little flame of bitterness in my heart, jealous of those who had jobs they loved.

When I was able to be creative in my job – which in a bureaucracy is difficult to do – or when I could really help people, I liked my job. Mostly, though, I felt like an imposter, too embarrassed to say I had made a terrible mistake in my career choice when so many others would have killed for my job.

The irony of my life was that I became the Deputy Minister of Education and Early Childhood Development in New Brunswick, but all I really wanted was to be a published author on the department's curriculum list, or to be sharing my writing with kids in a classroom or daycare centre.

There was a huge disconnect in my life: From the outside it looked as if my career was firing on all cylinders, while all I really wanted to do was sit in my office and cry.

My dad, the most upright man I have ever known, died. And in the blur of the funeral and the Christmas season that followed on the heels of his death, I realized that at the end of your life it is your family and close friends' opinions that matter, and all they want is for you to be happy. Everything else is just noise, and most of that noise is in your own head.

So I took a deep breath and left my job for an equally hard, but happier path. And yes, you can say I could "afford" to leave because I had a pension, but I tell you truly – I would have left regardless. I was that soul sick.

In the months since leaving my job I have completed two middle-grade novels, which I am trying to get published. I have a blog. Where once I would have been too shy to tell people that I was a writer, now I embrace it and not a day goes by that I do not think of how grateful I am to be working at what I love.

No longer at the top of a profession, I find myself a humbled and excited novice. I don't know what would have happened if I had pursued my dreams in my 20s – maybe nothing, maybe everything. What I know now is that if you are living your life worrying about what others will think, or always choosing the "safe" option over the possibly "spectacular" option that could lead to failure, you are not living your life.

Life goes by in the blink of an eye. My dad's death and the buzzing of my BlackBerry on that fateful night were gifts that woke me up. But I was the one who saved my life.

Facts & Arguments
Our house won’t be the same when our daughter leaves for university
July 9, 2012 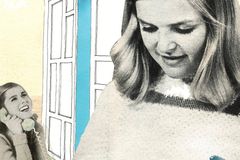 Facts & Arguments
Working from home isn't all it's cracked up to be
January 18, 2012 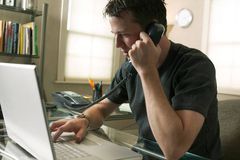