When I tell people I spent my morning attending a vigil for pigs or cows entering a slaughterhouse, the reaction is usually: "Isn't that depressing?" or, "I could never bring myself to do that. It's too sad."

They wonder how I can watch animals stare back at me with their mournful eyes, hear their grunts and squeals, and do nothing more than hold a placard as the trucks drive in to unload.

You may be surprised to learn that, though I do think that bearing witness is the right thing to do, I actually do it partly because it feels good. I enjoy the vigils and don't leave feeling depressed. In fact, I typically walk away smiling, with a sense of calm, ready to start a brand-new, joyous day.

Vigils for cows arriving at St. Helen's Meat Packers near Toronto's Keele Street and St. Clair Avenue West are undeniably sombre: They usually take place before the sun has risen, and there are few passersby to share information with. To some protesters this would be a deterrent, but for me it's an invitation to truly make a statement that the lives of these cows matter and that someone is watching.

In contrast, the most rewarding vigils are those held on what is known within the Toronto Pig Save movement as "Pig Island," a median at the corner of Lake Shore Boulevard and Strachan Avenue. There, the trucks stop alongside everyday commuters in the left-hand turn lane at the traffic lights, which gives activists time to interact with the pigs and the drivers.

As the trucks pull up, we get close to the animals. We talk to them, tell them we love them and that we are sorry. They look back at us, grunt, squeal and pant. Sometimes they offer kisses or tug at our mittens with their mouths.

While it is sad to know where they are headed as soon as the light turns green, it feels good to know we were there to prove that someone cares about them, whether or not we changed their fate. It's like attending someone's funeral to honour them, even though it won't bring them back. There is also the consolation that raising awareness of the pigs' predicament could alter the fate of their brethren.

As for the people in cars, we hand them literature about the local slaughterhouse, the journey the pigs have just made, and how consumer power can make a difference. Often a truck full of pigs is still in view, with a noticeable lingering smell, as we talk to the drivers.

The first time I attended a vigil, I was surprised at how receptive people were to taking our information sheets. Even the truck drivers will sometimes roll down their windows and stick out their arm for a leaflet. We talk about the intelligence and emotions of pigs, about government "pork" subsidies, and the environmental effects of factory farming. Sometimes we offer vegetarian "bacon" sandwiches as first-hand evidence that you don't need to be deprived of tasty food by not eating pigs.

People usually nod to acknowledge they have taken in the information. Some ask for more, or roll down their window with a smile and say: "I'm already vegetarian!"

They do not seem annoyed or confused by our presence. They know why we are there, and with truckloads of pigs passing them every day of their commute, it is difficult for them to forget where their food comes from.

Of course, there are moments when my eyes tear up as I face the fact that the thousands of breathing, feeling pigs right before my eyes will shortly be killed right around the corner. I have been a vegan for 14 years and work full-time for Canada's largest vegetarian organization, so you might think I'd be confident I am doing all I can. But there is no way you can look a pig in the eye and not feel guilty about leaving him to his fate.

Sometimes I wonder how beneficial my presence really is. I remember the night my dog passed away. We visited her in the animal hospital, and though she was sick and tired, she immediately lifted her head and stretched forward to lick our hands. I often recount that moment, thinking how happy she was just to see us after spending the day alone, feeling ill.

But my father recalls the moment differently. He fears that she may have thought we came to bring her home, and that we let her down by not saving her.

Does our interaction with the pigs take their minds off their horror for a few moments, or does it bring them false hope?

Still, attending a vigil before going to work is uplifting. I feel good knowing someone was present for the animals and hopeful because of the reactions and enthusiasm from passersby. I leave feeling inspired to spend each minute in the office working hard to encourage people to choose a vegetarian diet.

That being said, I don't feel these vigils are just for vegetarians. People who haven't pledged to stop eating meat can also take part. To me, the vigils are about apologizing to the animals, whether it's out of guilt as a vegan for not doing more, or for having them for dinner. We are telling these animals they matter, and acknowledging they are real, alive and loved. 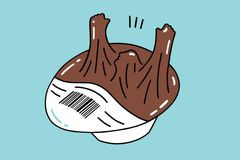 Facts & Arguments
A Canadian in Sweden finds sweetness in her new north
March 10, 2013 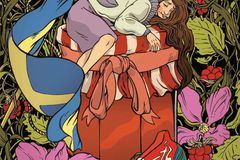