It took a child to remind me that in our virtual world of hashtags and apps, avatars and algorithms, the human imagination remains our defining technology. The boy's name was Tyler and he placed stones on top of each other.

Our school was bonding at camp at the start of the academic year, as schools like ours feel they must, but young Tyler did some bonding on his own at the water's edge.

When I first saw his columns of stones, I thought they were another camp activity: drill holes in awkwardly shaped rocks and insert a thin steel rod through them so they'll link together and stand upright. The team that builds the tallest pillar of rocks in the shortest time wins. How else could they have got that way?

By evening on the Thursday we arrived, five columns of standing stones loomed in the gathering darkness. When I asked about them, a student said, "It's Tyler, Sir. It's what he does."

By Saturday, when we boarded the buses for home, he'd put up a dozen or more.

They reminded me of the inukshuks devised by the Inuit to deceive the short-sighted caribou into thinking they'd spotted a group of humans, thereby making them flee in the opposite direction toward the hunters.

But these were more intricate than inukshuks and seemed unaware of the law of gravity. They were stabilized by neither steel rods nor cement. Their adhesive was gravity itself, and they served no practical use whatever. The stones balanced on top of each other simply because they could; all they did was thrust the middle finger at impossibility.

I watched Tyler dig them out of the sand and place them one above the other in the most precarious way imaginable. By giving each stone the least possible contact with the one below it, he risked all with every added stone. A vertical, acrobatic column arose wherein each new rock found its perfect angle and point of rest, extending without disturbing the counterpoise of the whole.

They were an illusion and a paradox, a vision of solid rocks balancing in air, oblivious to the gravity they harnessed.

The boys would gather round the sculptures in the evening after supper and gaze at the moon over the lake, a spontaneous tribe of silent disciples, drawn to Tyler's silhouettes of stone. No one trashed them in the night. They were there in the morning, proud and precarious, the risen sun glinting off their condensation.

I wondered, does creating the stone columns make Tyler an engineer or an artist?

Beyond question, this was art. Ask Henry Moore, another student of the centre of gravity, if his steel and stone sculptures in the parks of capital cities the world over are his expression of the purest imaginable synthesis of idea and form, spirit and body, energy and ethos, and he might have replied, "That is my hope."

I never asked Tyler why he made them. He might only have said, "I wanted to see what they looked like." Like the novelist explaining he wrote the story just to find out what happened.

I imagine that artists, whatever their medium, are the servants as well as the architects of ideas that must find their way to the surface and assume a form. Tyler's stones lay buried in the sand until he dug them out and raised them to a higher plane. They became the best they could be in a world that could really care less, continuing to endure long after the lake's steady ripples sucked out enough sand beneath the bottom stone to dislodge it and collapse the lot into just rocks again. Did he realize what he was doing? At some level he must have, otherwise he wouldn't have done it, even if he was always capable of doing it.

And that evening, sitting around Tyler's stone columns, the silent tribe of pensive adolescents, liberated from the endless beeping distractions of their hardwired and disconnecting culture, might also have contemplated thoughts too deep for words.

Isn't it a function of art to speak when words fail us, to make us feel we're part of something greater than ourselves when we feel reduced and programmed and purposeless? Isn't this Keats's "Beauty is Truth" that revives us and reminds us of the best that can be? Did those boys also feel that, somewhere inside? I don't know.

I thought on the bus home from camp, as we rebooted our smartphones and engaged once more the amorphous and inchoate cyber world, that we were all coming apart again. Each of us withdrawing from the stone circle by the lake to our isolating pods of uncommunication, retreating once more into global connectedness, logging into its comfortable anonymity. Do our words not fail us here, too, but in a different way?

Henry David Thoreau, himself a lover of lakes and ponds, remarked when told that the telegram had just been invented, "They tell us that Maine can now communicate with Texas. But does Maine have anything to say to Texas?"

Tyler's standing stones said something, and they speak now, long after they have returned to the sand. They utter the permanence of the imagination, a priceless piece of technology that costs nothing, arises in the unlikeliest places, and delivers us from the suffocating sands of the daily round and common task. 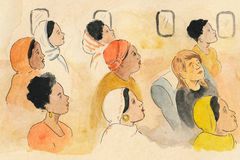 Facts & Arguments
Hair standing on end? Here’s what you need to know about lightning
July 17, 2013 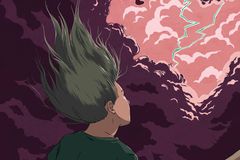 Facts & Arguments
Another summer of hiding from my past – in Home Depot
July 16, 2013 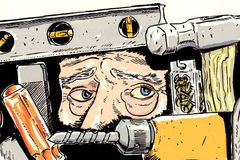