Looking after your home, reports The Daily Telegraph, is more stressful than being at work, a study suggests. "New research shows worrying about household chores such as cleaning, getting the car serviced and paying the bills may be even worse for your heart. Scientists in the U.S. tested over 100 working men and women and found those who took on most of the responsibility for running the home had significantly higher blood pressure than those who left it to their partners. The findings, published in the journal Psychosomatic Medicine, suggest it's not the workload itself but the stress about how to cope with it that causes the damage." Having to look after children or pets had no adverse effect on blood pressure.

"It's just what the midwife ordered," writes Max Benato in The Guardian. "You've given birth, your body's in free-fall, the baby's howling, your shoulder's covered in sick, you're propping your eyelids open with matchsticks and battling the baby blues. But, hey, why not have a party? The new baby trend taking the U.S. by storm is 'sip and see' - a post-birth, show-off extravaganza where you throw an open-house party for people to drop in, sip your booze (champagne, obviously) and see your new offspring (looking angelic, obviously). It's only a matter of time before the phenomenon crosses the Atlantic - baby showers are just so last trimester."

"A new report from a secretive, highly influential group of U.S. scientists is urging the Department of Defence to begin collecting and mapping the full genome of all military personnel - a move that could well give the Pentagon the ability to select for certain genetic predispositions," writes Dan Froomkin for huffingtonpost.com. "Noting the dramatic decrease in the cost of fully mapping individuals' genomes, the report suggests that some traits relevant to war-fighting 'are likely to have a strong genetic component, for which better understanding may lead to improved military capabilities.' And, possibly even more attractive to the Pentagon brass, gene-mapping could lead to 'medical cost containment.'"

A survey of 43,000 online daters shows that women get more attention if some men think they're unattractive, reports The Daily Beast. OK Cupid, the second-most-popular online dating site, cross-examined data from thousands of users to try to determine what kind of women most men find attractive - and which women are attractive enough for men to actually contact. "What they found? That the more men as a group disagree about a woman's looks, the more they end up liking her; that guys tend to ignore girls widely considered to be attractive and opt for women who had less consistent ratings … 'We now have mathematical evidence that minimizing your flaws is the opposite of what [a woman]should do,' writes the site's editorial director and co-founder Christian Rudder."

Who made you that way?

"A new laboratory study on fruit flies may lead to a new way of looking at social behaviour," says Psych Central News. "Texas A&M scientists believe the discovery that certain genes become activated in fruit flies when they interact with the opposite sex can change the way human dating and courtship are viewed. … 'Be careful who you interact with,' said Ginger E. Carney, PhD. 'The choice may affect your physiology, behaviour and health.'"

A Taiwanese man has failed in a bid to sue his neighbours - for training a mynah bird to insult him, says orange.co.uk. Wang Han-chin, an electrician in central Taiwan, accused five neighbours of inflicting emotional stress and injuries. He says they trained the mynah bird to call him a "clueless, big-mouthed idiot" every time it saw him, reports the Taiwanese newspaper Liberty Times. Mr. Wang claimed the bird's insults caused "serious distress, making him lose concentration at work so he suffered burn injuries. He says the neighbours taught the bird to curse at him as revenge after he complained to the police that they were too loud. However, they denied the allegations and prosecutors decided to drop the charges because of insufficient evidence linking the bird to Mr. Wang's injuries.

In Britain, a gay man and a straight woman who married each other for a university art project have been criticized for mocking the sanctity of marriage, says dailymail.co.uk. "Art students Nora Battenberg-Cartwright, 21, and Paul Cartwright, 20, say that their union is 'more honest' than a traditional marriage because they can tell each other when they are seeing other people. However, the pair, both studying fine art at the University of Worcester, have no plans to consummate their relationship.… Ms. Battenberg-Cartwright, who is German and moved to the city to study, said: 'It's about an artistic unity rather than a love union, to join each other in art and make us the art.'"

Facts & Arguments
It's not nice to shoot your neighbour's zebras (especially in California)
January 13, 2011 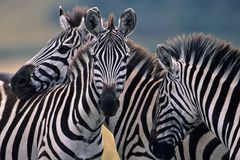