Those who dare to don this fall's slick, futuristic fashions will need a face to match. At many of the autumn shows, models had supernaturally pale, poreless complexions, as if they were engineered in an ultramodern lab on a planet without light. The faces served as accessories to the sci-punk ready-to-wear of Jean Paul Gaultier, Bottega Veneta and others. Sometimes, the look evoked Lisbeth Salander (especially Rooney Mara's version of The Girl with the Dragon Tattoo), with some Nancy Spungen eyeliner thrown in (think shadowy sockets against a white expanse of skin). Other times, as at Yves Saint Laurent, the face was Pan-Cake smooth but for black/red lipstick. Porelessness, it seems, is the new ideal: Not a month goes by without women's mags showing how-to spreads on brushing away all imperfections and lines to a smooth plane. The result is a slightly uncanny version of the face, human but not quite – the skin of an avatar.

The dream of cosmetically perfect skin –some doctors have used the phrase "porexia" to refer to a hatred of one's pores – is a side effect of the times; as technology increasingly serves us, our looks are now in service of technology. Actresses and movie stars took the lead a few years ago when super-scrutinizing HD cameras demanded new kinds of makeup. But we regulars feel the pressure of self-representation, too; a day on Facebook and Twitter is the equivalent of sending out a dozen headshots to hundreds of people.

Image, in other words, is the new currency and the new language. What was once an e-mail about a great dinner became a Tweet and is now an Instagram of someone posing with an appetizer. (Does it seem like we're moving backward here, returning to a life as cavemen scrawling on walls?) If social media makes us all celebrities, we need the skin to match.

Like anorexia, the word "porexia" implies a distance between the reality of the actual body (in this case, skin) and one's distorted perception of it. Goose-stepping right into that gulf is an army of products. First up in the war on pores are the cleansers (such as Dr. Brandt's Pores No More Vacuum Cleaner) and a multitude of "pore minimizers." After that comes the under-makeup primers – often called beauty balms or BB creams – sales of which have almost doubled in dollar volume since 2007, according to retail analysts NPD Group. Smashbox Cosmetics, for one, has acknowledged makeup's new function with a High Definition concealer and foundation as well as a popular, lightweight tinted primer called Camera Ready BB Cream.

And when Seventeen magazine recently offered readers a Body Peace Treaty, making a vague commitment to reign in airbrushing after teens complained, it didn't seem revelatory: We're already airbrushing ourselves.

The poreless face is a white canvas; dark-skinned women, already a rare sight in fashion, don't conjure up the Tilda Swinton look (at least not in the limited imaginations of some stylists). The fetish for the whitest face casts most of the world out of the beauty ideal and, alarmingly, gives rise to an industry of skin whiteners. Skin whitening has been a problem in parts of Asia for decades, with many reports of death and illness from products containing dangerous levels of hydroquinone and mercury. But the psychological warfare continues: This spring, an Indian company took heat for a revolting TV ad that showed a young bride saving her marriage with the judicious application of a little "Intimate Wash," which is basically genital whitening cream.

It's no longer an issue of The Other. Market researcher Global Industry Analysts,Inc. claims that sales of lightening products are rising in the U.S., too; worldwide, they're expected to reach $10-billion by 2015 – body anxiety goes global.

On top of that pale base, those seeking otherworldly skin will apply a thick layer of foundation. I remember girls lined up at high-school bathroom mirrors rubbing away the brown, runny seams around the neck with great shame, but now foundation is touted by beauty experts as an everyday essential. Primers, full coverage foundation, dark lips and spackled eye shadow reveal the artifice in beauty and fashion – a postmodern pulling back of the curtain.

Certainly the "natural look" (in beauty industry terms, anyway) has a kind of inborn tyranny; it can actually take hours to look like you do nothing. But there has always been something intriguing about women who pile on the makeup, refusing to hide the fakery. The Dolly Partons and Katy Perrys, unabashedly open about the plasticity of their looks, seem weirdly liberated, cheerfully presenting themselves exactly as they want to be seen.

The fact is, pores are genetically determined, and they do get bigger as we get older. The new skin products work hard to undo this biological reality, and the new look is a cyborg state of being, wherein man and machine have merged into some unearthly third option. If our smartphones, iPads and laptops are now our external brains, we're adapting our external bodies to their needs. Kim Kardashian, who literally lives on camera, is the spray-tanned queen of this poreless moment. She talks openly about regularly getting Fraxel treatments, a cosmetic laser resurfacing that blasts her face to that shiny smooth state.

Donna Haraway, the University of Californiaat Santa Cruz professor who penned A Cyborg Manifesto in 1985, could have been talking about Kardashian when she wrote: "Our machines are disturbingly lively,and we ourselves frighteningly inert."

But are we beautiful?

Four tips to help you get a glowing complexion
April 14, 2012 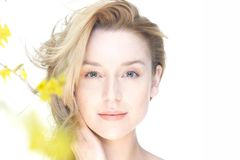 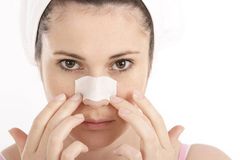 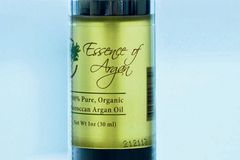