Even before American Hustle opened, there was no shortage of buzz around the dream-team cast – Christian Bale, Amy Adams, Bradley Cooper, Jennifer Lawrence and Jeremy Renner – and the clever, caustic, comedic story directed and co-written by David O. Russell. Tied with 12 Years a Slave for the most Golden Globe nominations (the winners will be revealed Jan. 12), the film is also a visual romp that brilliantly exploits 1970s fashion to enhance the characters' idiosyncracies.

For American Hustle, the Los Angeles-based Australian costume designer dipped into the Halston archives and trawled costume houses across the United States to build layers of transformation that helped each character achieve their throwback swagger. Currently conceiving the wardrobe for Batman vs. Superman, Wilkinson recounts how working with Russell – and styling the scratchy polyester suits – helped prepare him to design the next generation of Batsuit.

One of the many standout fashion moments in the film occurs when we see Sidney (Amy Adams) try on a emerald-green wrap dress at the dry cleaners. How did you arrive at that choice?

That was vintage Diane von Furstenberg. David and I talked a lot about different designers who we thought typify the period and labels that Amy would have aspired to. A classic DVF wrap dress is such a great statement for the period because it was a liberating time for women, clothes-wise. Clothes became much less structured; they relied less on underpinnings and really showed off a women's physique.

And funny enough, those dresses look as current today.

We really wanted to film to reverberate with modern audiences. So, whenever we could, we created direct links with moments like that where the fashions aren't just iconic or cliché; you can connect with the characters very directly.

With all of Amy's plunging necklines, how did you manage to avoid wardrobe malfunctions?

It was a combination of Amy's amazing poise and the way she carried herself. Plus there was some strategic editing. And then we tried to avoid any drafts.

Were you fitting Christian for his wardrobe as his gut was growing?

It was very important for him straight away to achieve the physicality of the role before putting clothes on. So he had begun his cheeseburger diet and each time he came in, he was heavier and heavier. And then clothes made more sense. He started to shuffle around the room; a wonderful character was being born.

Do cinematic costumes have the power to influence the way we dress in real life?

I think they do. There's always been a fascinating link between film and fashion. It's a bit of a chicken-and-egg situation. Does film inspire fashion or does fashion inspire film? Certainly, I think film is a reflection of society. And as far as this film goes, it's not necessarily that I think it's appropriate for people to start wearing 1970s clothes. But I think the attitude of the characters in the film is quite inspirational. They're living large and taking risks and inventing their lives with their costumes.

It is more or less challenging to create period wardrobes versus contemporary attire?

The challenge is that everyone in the audience knows about the very detailed semiotics of clothes – who wears which type of jeans, the different cuts of T-shirts worn by different people, a hipster denim jacket versus a working denim jacket. So you have to be extremely precise with your decisions as a costume designer for contemporary films. With a period film, the audience is going on a discovery with you and you're leading them by the hand into less-known territory. It's just a different type of relationship.

Did you notice the actors performing differently once in costume?

With Amy, in particular, it takes a certain confidence to wear clothes that are so daring and have such streamlined silhouettes; but those dresses can also make [a character] more vulnerable; there's so little between you and the rest of the world, you're sort of going out on a limb.

It's too bad there's no Oscar category for best hair – from Jeremy's pompadour to Christian's comb-over. Did you weigh in on coif styles?

I was involved in the head-to-toe creation of these characters and I worked very closely with the hair and makeup department. We knew that every square inch mattered to David. He has a way of stretching creativity to the max. You almost get outside your comfort zone and into a space that is raw and intuitive. And it's when you are out of your comfort zone that you make these larger, bolder choices.

Have you applied this experience to your current film, Batman vs. Superman?

I can feel myself referencing back to working with David – as in, have I thought of an out-the-box solution that will really surprise and help the audience to have a dynamic and unusual connection with the characters?

You realize all eyes will be on Ben Affleck's codpiece.

Oh yes, we're having lots of fun putting his look together. It's just such an honour to be involved in this very iconic character and to be able to contribute to how he is going to be seen by the next generation of moviegoers.

If you could take home one souvenir from American Hustle, what would you choose?

It might be the vintage ascot that Christian wears in the opening scene. In those first five minutes, there is such an intensity of information and I'm particularly proud of that. Also how the ascot is tied so fastidiously – even the Star of David is nestled so beautifully in his abundant chest hair – I think all of those details really sum up the care and love we put into the creation of all these characters. 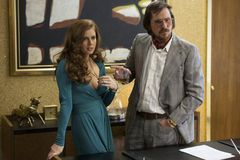 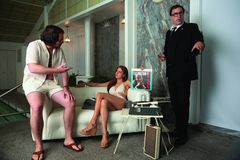