With fast fashion still so rampant, it’s no wonder style circles are now obsessing with the notion of fast art, too. And few do that better than Toronto native Donald Robertson, a New York-based illustrator who’s become a superstar on Instagram (@Drawbertson) with more than 100,000 followers, thanks to his wonderfully cheeky takes on fashion’s movers and shakers. The 53-year-old suburban father of five, who was asked to leave the Ontario College of Art and Design in the early 1980s because his teachers felt he was too commercial, went on to help with the creative direction of M.A.C Cosmetics when Frank Angelo and Frank Toskan founded the trailblazing company in 1984. Five years later, Robertson moved to Manhattan and worked as a creative director at Condé Nast before landing his gig with Estée Lauder, where he now heads up creative projects for brands like Smashbox and Bobbi Brown. But Robertson’s passion for poking fun at famous fashion folk and his love of immediacy when it comes to artistic output has led him to sell his work online (http://www.donaldrobertson.com/) and made him an Instagrammer extraordinaire. “We live in an ADD culture, so I want constant flow,” he says.

Now Robertson has teamed up with J.Crew in a Save the Bees campaign, which is part of the clothing brand’s Garments for Good program. Robertson’s whimsical bee illustrations are being featured on limited-edition T-shirts as well as a series of related products to help raise funds for Buglife, a U.K.-based organization dedicated to the conservation of bees and other insects. 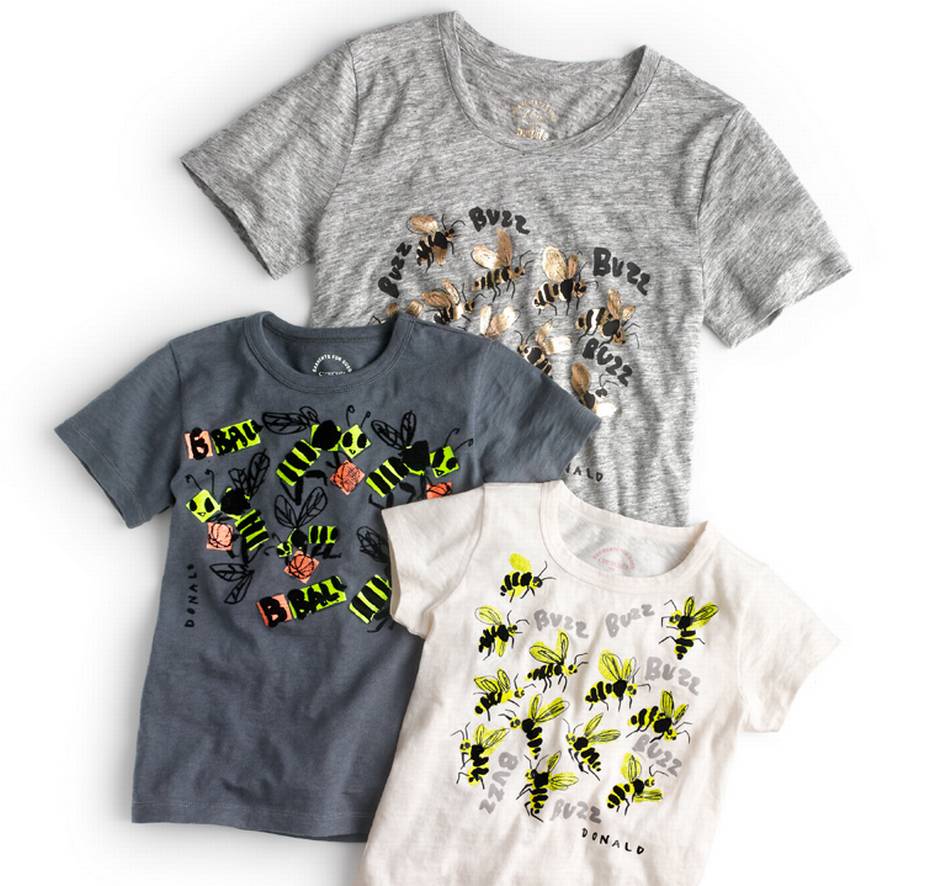 Dubbed the “Andy Warhol of Instagram,” Robertson says he’s flattered by the comparisons: After all, Warhol, too, started out as a commercial illustrator, was unpretentious and open to things, and didn’t care what others thought. I spoke with the prolific Donald Robertson about T-shirts suitable for framing and why he sees himself as a “paparazzi illustrator.”

It’s wonderful to see how you’ve become an art icon via Instagram.

Yeah, I’ve been hustling! And the sad thing is that my wife is minimal and she just would throw it all out if she could. It’s her nightmare. Actually, if you go to Instagram, and look at the [rooms] of the house that aren’t underground, there’s not a stick of art there.

Oh my god, the whole place is artless!

Well, you’re putting enough of it out there for all of us and seem to be riding the zeitgeist of what’s happening now in fashion. The world is largely about fast fashion, and there’s a sense of immediacy to the illustrations and sketches that you do that really fits the tone of the times.

I like to call myself a “paparazzi illustrator,” because what I’m finding is that people are news junkies and they appreciate the artfulness of what I’m posting. But what they really like is recognizing news. A perfect example of this that’s fascinating is Kim Kardashian, who’s not a model size right? Well she comes to Paris Fashion Week, and now her sister [Kendall Jenner] is in every show and she’s got to steal the thunder from her sister somehow. But what’s she gonna do? So I’m in Paris and Kim shows up with that white hair! [Kardashian dyed her dark tresses platinum for the occasion.] And I thought, “Oh my god, that is the best thing I ever saw! She was pretty much cheered in the front row of every show. She and Kanye West completely steal the thunder and get all the attention and I’m thinking, “This is too good!” I was in my hotel room painting her, this new white-haired version of Kim, and I posted it right away, and then the next thing you know half the world is on my Instagram account telling me that Kim just “liked” it! The whole thing is real-time news. It’s fun, it’s pop culture and everybody is in on it. It’s the best! 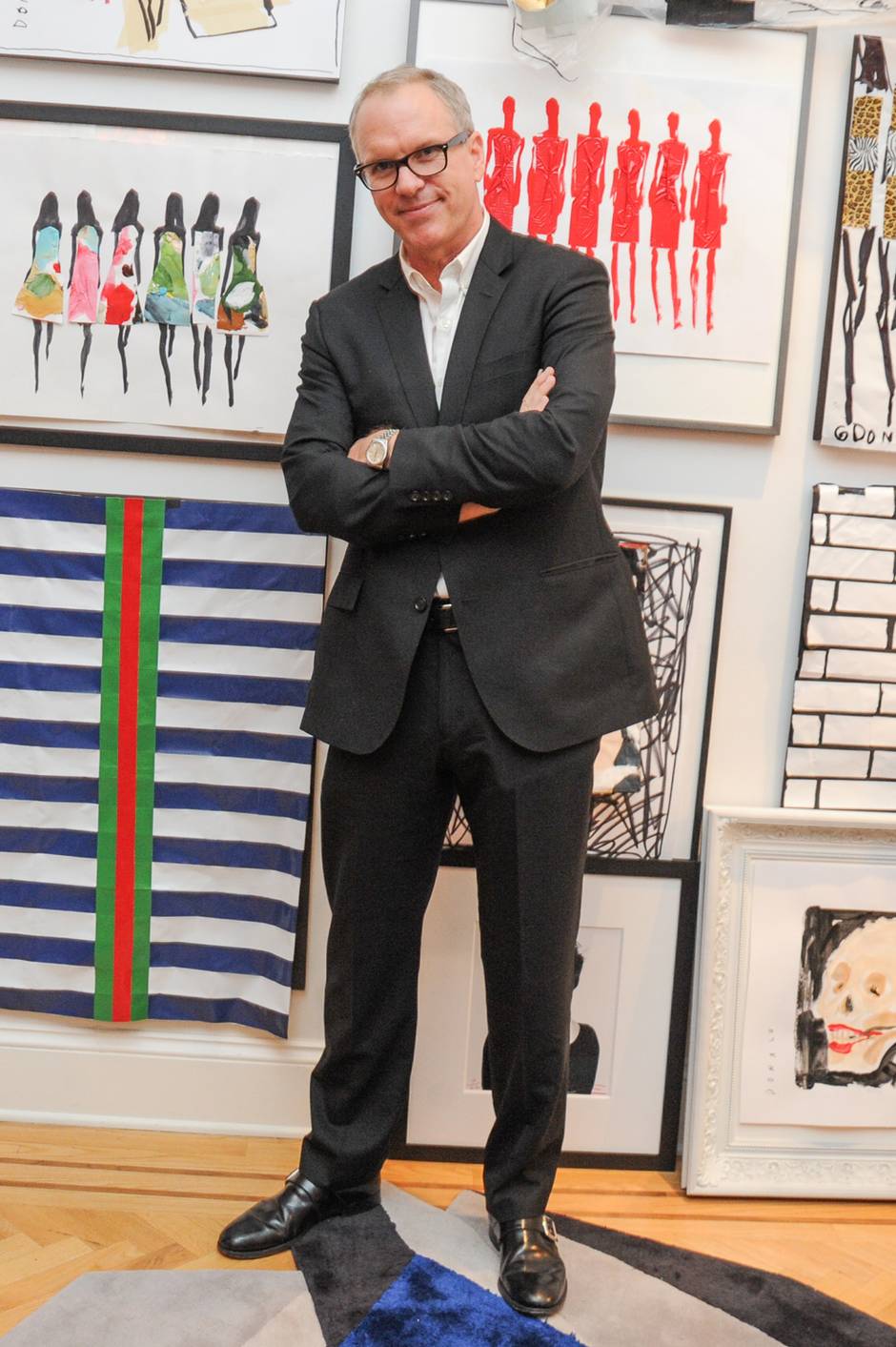 This Save the Bees issue, though, is a serious one. I was reading that there’s the possibility of 150,000 species of insects disappearing by 2050 if we don’t take action.

Yes, the bees situation is very, very intense and it’s one of those things that you have to make note of now before it’s too late. I think it’s fantastic that J.Crew is taking a stand and raising awareness. So when they called me to do this, I said, “Absolutely!” And Jenna Lyons [the creative director at J.Crew] is one of those people who you just give some rough sketches and some rough paintings and what comes back is even better than what you imagined.

Well, it’s a wonderful way of getting a piece of your art!

I secretly tell people that the best thing to do these days, if you’re on a budget, is to frame a J.Crew T-shirt.

What about the artistry that’s becoming so inherent in fashion?

Art has really infiltrated fashion in quite a poignant way. It’s almost like a T-shirt show at Uniqlo right now, with Basquiat and Keith Haring and Warhol being featured on T-shirts. And I’m sure there are people who are completely horrified, but I think it’s fun, and it’s raising awareness and the kids see it, and then they go back and they Google it. So if it makes an 11-year-old kid go to his computer and instead of playing Game of Thrones, he’s Googling artists … well, how can that be bad for any artist’s body of work?