London's designers could not have predicted the inclement weather (a snowstorm in New York, gale-force winds at Heathrow) that delayed the arrival of models, makeup artists and Anna Wintour to their fall 2014 fashion week. Yet, in the curious way that fashion is as much the product of foresight as creativity, the most noteworthy collections during the event, which wrapped up last week, presented compelling new reasons to look forward to winter dressing.

If next year's round of cold weather proves as nasty and brutish as this one's long, slushy slog, you can feel protected and pretty by throwing on one of Burberry's shearling jackets, hand-painted with florals inspired by the gardens in Bloomsbury. Christopher Bailey, now serving as both the brand's creative director and CEO, scaled back the ubiquitous Haymarket Check, opting instead for an artier slant. Models took their final walk draped in individually monogrammed cashmere blankets that will be a luxe addition to any power-outage contingency kit.

The innovative outerwear options continued at Shrimps, a peppy line of colourful, faux-fur coats and accessories, where designer Hannah Weiland showed pastel toppers with bold-hued bands placed halfway down the sleeves. At Pringle of Scotland, head designer Massimo Nicosia collaborated with material scientist Richard Beckett on coats trimmed with micro lace that mimics the brand's signature argyle and is made from 3-D-printed powdered nylon. Henry Holland finished his coats with Steiff teddy-bear fur and paired them with shirts that read "Riche Bish" (it wouldn't be London Fashion Week without some obligatory cheekiness). Tom Ford's largely understated collection got its punch from fox furs in poppy red and purple. They're guaranteed to be street-style-photographer bait when temperatures plummet, though Ford's red crocodile stiletto cowboy boots are not recommended for navigating ice-slicked streets.

For that kind of footwear, you'd be better off taking inspiration from Hunter Original, the heritage wellies brand now under the creative direction of Alasdhair Willis, industrial designer and husband to Stella McCartney. The lineup for its first runway show included filmy ponchos, tailored duffel coats and boots made for sloshing down a flooded catwalk.

The season's standout collection was Christopher Kane and not just because the designer managed to incorporate practical, puffer-coat nylon into little black dresses. Now that the label is part of the Kering family (the luxury goods conglomerate behind Gucci, Balenciaga and Saint Laurent), Kane has made the inevitable foray into handbags. The odd but appealing styles featured sturdy life-preserver buckles and more of that ruched nylon. His final grouping – dresses made from handkerchief-style squares of fabric that swished and flapped open like the pages of a book – created new dimension around the body. His potential seems limitless.

Jonathan Anderson is also benefiting from a new backer, in this case global behemoth LVMH. While it might be a stretch to suggest that his J.W. Anderson collection's minimalist, gender-ambiguous style was infinitely more wearable than in past seasons, it was undoubtedly more refined. Dresses with a twisted piece of shearling, draped diagonally from one shoulder to the opposite elbow, acknowledged winter without being constrained by it.

Other designers rethinking winter fashion included Alice Temperley, who applied quilting to printed floral evening dresses. Marques Almeida adorned silk pyjamas and denim shirts with goat fur. And Topshop Unique showed belted patchwork-fur vests layered over wispy slips. Its series of cropped down jackets could easily be dressed up for a snowy evening, though presumably not with shortshorts, as shown.

If any Londoners can wittily tackle winter dressing, it should be Canadian expats Thomas Tait, Erdem Moralioglu, Todd Lynn and Mark Fast.

Fast introduced new enveloping volumes of knitwear suggesting a plusher counterpoint to his cobwebby cling. Lynn, on the other hand, streamlined his silhouette to wearable results with tailored outerwear. Moralioglu produced an impressive collision of delicate fabrications and assertive, regal forms.

Tait, who made the shortlist of young designers for the new LVMH Prize, was particularly gutsy with eighties power shapes, motocross references and Bauhaus colour blocking in primary hues. A standout shimmery second-skin silk-chiffon dress was hardly the stuff of winter. But then it's always summer somewhere in the world. 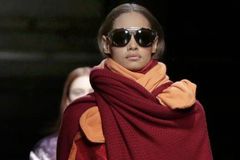 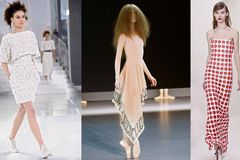 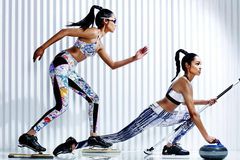