This time last year marked the debut of London Collections: Men, a fashion week entirely devoted to celebrating British men's wear. Scheduled independently of the women's collections and immediately ahead of the superstar men's shows in Milan, the event has very quickly established its host city as a well-rounded fashion capital.

One could argue, of course, that London has long excelled across the men's-wear category, from the master tailoring of Savile Row to the high-fashion punk collections from designers such as Vivienne Westwood and Alexander McQueen. But over three days of shows and presentations that concluded June 18, it was the dynamic juxtaposition of venerable labels and emerging designers that gave London's men's wear an edge over its French and Italian counterparts.

Take Christopher Bailey's decision to bring the Burberry Prorsum men's collection back to its home town instead of continuing to show in Milan. Certainly, it confirmed the legitimacy of LC:M this season, but beyond that, it showed just how well the British brand straddles tradition and the avant-garde – what many in London refer to as "Savile Row versus Shoreditch."

Starting with the theme of "writers and painters" for spring 2014, Bailey steered his look away from sharp suiting and paid more attention to livable knits, classic black slacks and punchy deck shoes.

"I wanted this collection to celebrate the uniquely spirited and charming British aesthetic, with a nod and a wink to the unmistakable style of [David] Hockney and [Alan] Bennett," Bailey explained in the press release.

Hockney hues – those flat, vibrant bursts of blue, red, green and daffodil yellow – were easy enough to spot. Ditto Bailey's interpretation of a slouchy, unstructured "Artist's Jacket" – that is, a smock with buttons – which he paired with polka-dot shirts and horizontally striped ties.

If Bailey captured the extroverted, boyish artist, McQueen's artist archetype almost seemed to have a villainous streak. Like an evolution of the recent "steampunk" trend but with less clutter, the long coats and white shirts merged Victorian drama with 1980s Japanese minimalism.

While beautiful (and sometimes dizzying) prints have come to define the women's collections in London, the men's wear leaned more towards the crisp and graphic. There was no subtlety in the nods to late graphic designer Saul Bass: The jackets from Savile Row tailor Hardy Amies were adorned by pocket squares that read "Ha Ha Ha," and the three designers behind Sibling (Joe Bates, Cozette McCreery and Sid Bryan) fenced in their sherbet hues with thick black outlines.

"There's a sense of easiness and colour and optimism that is important to have as a part of men's wear – to still work within the traditional framework of men's wear but to add a little joy," explained Jonathan Saunders in a video on the LC:M site. Graphic elements in his collection – patterns that evoked checkered cabs and road signs, for instance – were intended as an homage to cities, and his focus on technical fabrics – the vinyl-coated cotton shorts, the glossy jackets – added surface interest to his precision suiting.

Even given the Savile Row-versus-Shoreditch divide – Gieves & Hawkes, Hackett and Paul Smith make up the tailoring clique while Christopher Raeburn, Jonathan Saunders, Richard Nicoll and E. Tautz are among London's cool kids – there remains a grey area (indeed, a whole lot of light grey everything). Which is to say, today's consumer might be wearing a Gieves & Hawkes limestone-toned summer suit to work and a Christopher Raeburn perforated knit sweatshirt on the weekend. At E. Tautz, models looked like moody modern dandies in acid green evening jackets and black city shorts.

Christopher Kane, whose label now has the backing of luxury conglomerate Kering (formerly PPR) went heavy on basics, yet stood apart from the pack with an eerie topographical face image and geometric lattice that was not unlike some Norman Foster-designed structure (an altogether different direction than the savage floral prints that appeared in Milan at Prada and Gucci).

But it was J.W. Anderson whose truth-or-dare approach to men's wear made the strongest statement this season. The truth: Those backless chiffon halter blouses and column silhouettes will be a tough sell at retail. The dare: Such unusual, androgynous architecture is what might ultimately push fashion (at least, in London) forward.

Pattern mashup: how to pull off decoupage prints
July 6, 2013 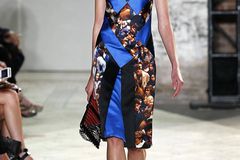 Is showing off my bra an acceptable fashion choice?
July 6, 2013 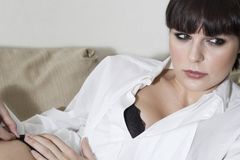