I always make the mistake of planning a nice relaxing day off in the spring, only to have my dad call me up and say, “Today you’re going to help me plant potatoes.” And how can I, having nothing planned, say no? So here I am, the summer after I’ve graduated university, unemployed and anxious about my future, placing bits of potato with at least two eyes each in dirt holes three-inches deep.

I’ve graduated with a Bachelor of Arts, and like many graduates, have no idea what to do with it. I switched from something extremely practical – nursing – to something broad and impractical – history. I went into it with eyes wide open, but, as I kneel jobless under the vast Albertan sky, wriggling my fingers in the dirt, I feel as foolish as BA grads are claimed to be.

So instead of entering the intellectual workforce, I am doing something practical by scratching food from the earth, like humans have done for thousands of years. Like my father and grandfather and great-grandfather have done before me. I’m from a long line of potato farmers.

My dad unravels his skein of rope, marking in the dirt exactly how far each plant needs to be away from each other.

“How far apart do they have to be?” I ask. “Does it really matter?” The job might go faster if we weren’t so precise. I thought about the fields of potatoes we had passed on the drive out of the city to the plot of land my dad rented for his garden. It was a fraction of the size of those fields, but much larger than any normal person’s garden. Modern farm equipment could seed this area in minutes, yet we will be here all day.

“Twelve inches apart,” he says. “It’s what your great-grandfather taught your grandfather.”

“And why are we planting so many?”

He smiles at me. “We need enough to eat through the winter.”

And we would eat these very potatoes all through the winter, as I had through my childhood, and my dad had through his childhood. A garden had been essential for immigrants struggling to put down roots here after the war – a supplement to what they could afford to buy, a reassurance they’d make it through the winter. My dad still spoke of his own garden this way. A joke, since we can buy from the grocery store with ease. But also more than that – he is still reassured by a cellar full of potatoes.

I crawl from hole to hole as my dad digs, placing the seed-potato pieces in and covering them up again. He believes the flavour of the potatoes he grows is worth all this work, even with grocery stores so near our house.

But who says it wasn’t monotonous for my grandparents and great-grandparents?

Getting an education was always the goal in my family. The Second World War interrupted the university dreams of my grandfather, and though his government promised him an education after the war it never materialized. Once he’d brought his family to his new country, Canada, he and my grandmother were determined that education would be a way up. My dad would not be allowed to drop out of school and become a labourer in the steel mill. They’d teach him to survive off potatoes, but they’d trust school to teach him more. And as for the grandchildren – me included – the future should be limitless.

But instead I am here planting potatoes, feeling stuck.

Somehow I don’t feel that I can catch up to where I’m supposed to be in this life. I feel I will never achieve a stable job since I didn’t pursue a stable degree, but rather a subject I loved. I feel I don’t deserve to live comfortably because I’ve never had to live off the sweat of my brow, never truly had to survive a cold Alberta winter off the potatoes I had stashed in the cellar.

I know I can never be as strong as those who wrenched their survival out of the earth, and I can never comprehend working that hard. Change brings trade-offs but I have to realize I am not meant to go back. I am not meant to go back to the way things used to be, though I am meant to recognize where I’ve come from. I am blessed to be here, learning from my father, who’s passing down what he learned from his father and grandfather before him.

Guilt then, is this feeling inside me now. Guilt that I hadn’t chosen a practical career, but had indulged my interests first. But then, I cannot atone by planting potatoes, I must stumble along and find my own way out. My ancestors never resigned themselves to stay where they were, and I can’t resign myself to failure. My ancestors may not have imagined the future I’m living but they meant for me to make my own choices within it.

“Tired already?” says my dad as I lean back on my heels and stretch, tilting my head up at the clear blue sky above. I am tired. Physically tired from bending and straightening, mentally tired from studying toward my degree and the strain of facing an uncertain future.

Maybe it’s the lot of the children of immigrants to feel unworthy of their hard-working ancestors. All I know is I am honoured in this moment to be able to imitate their motions in the present, honoured to learn what exactly their labour felt like and learn from it.

Resolutely I plunge my hands back into the dirt.

I may be a millennial basement-dweller, but I cherish this time spent with my parents
December 4, 2017 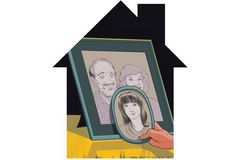