As we approach Valentine’s Day, stories about less typical (at least in the Western world) pathways to lasting love and commitment are not often shared. But arranged marriage can be a loving and long-lasting union.

My parents’ relationship was, as is the case for most of us, the first romance known to me. My father was besotted by my mother and never missed an opportunity to show it – she received all sorts of romantic surprises by my father throughout their 41-year marriage. At some point in our lives, the curiosity of our parents’ origin story rears its head.

We fell in love over the phone, and it gave me the confidence to love myself

He broke my heart, but I cannot let him go

I was in the first grade when a question went around the lunch table: “How did your Mummy and Daddy meet and get married?” We were all old enough to have seen one or two grandiose, special wedding episodes on the sitcoms of the day. I fondly remembered the finale of Three’s Company (yep, that was after-school TV in the early 1980s): the choreography, the decadence, the white dress was all so grand, and nearly impossible to fathom in real life. Was it possible that those two harried, nagging and aging by the day people I lived with at home had engaged in such a dreamlike ceremony and professed their love for one another? In front of other people? To a 6 year old, it seemed unlikely.

I realized, as the other kids retold sweet anecdotes about parents meeting in university or growing up down the street from one another, that I had no clue about the details of my own parents’ love story. I promised my pals I would ask that evening and retell my own story of love at first sight.

I asked my Dad first, and his version did not disappoint. “I had returned home to India for my first visit after being in Canada for three or four years. I was in a library one day and this beautiful girl was sitting at a table with her friends. And I just knew. I knew she was the girl I would marry.”

“Mom, what did you think of Dad when you guys met? Did you like him right away, too?”

“Well, not really. I didn’t like him at all, actually.”

“What? Well then how did you guys fall in love and get married?”

“We had an arranged marriage. My parents told me I was going to marry your Dad and so I did. And then I moved to Toronto with him.”

My mental image switched from my parents staring lovingly into one another’s eyes at the altar to the actual photos of my folks’ traditional Hindu wedding ceremony: Dad decked out in white silk kurta, smiling out at well-wishers. My Mom, otherworldly beautiful, wore a gold satin bordered, blood-red sari, her arms, ears and neck adorned with layers upon layers of gold jewelry. In the photo she was looking down, avoiding eye contact. Unmistakably sad.

What would I tell my friends now? That it was love at first sight for my Dad and “I guess I have no choice” for my Mom? Lucky for me, the attention span of 6 year olds is fleeting. I was able to dodge what I feared would be a painfully awkward series of questions that I myself had and was struggling with.

Endless explanations are expected from First Gens (first generation children born to immigrant parents), everything from, “What an interesting name, did I pronounce that correctly?” to “That’s an unusual smell, what are you eating?” but being asked to validate my parents’ arranged marriage felt uniquely embarrassing. I could wrap my head around my family’s different foods, our names, cultural clothing and music; the urban city I was growing up in was a sensory celebration of varied histories, journeys and origins. But love? Wasn’t love a universal experience? Didn’t we all harbour secret longings of being hit with that blissfully overpowering feeling to live with our soul mate?

My parents were a committed, loyal and happy couple. But privately I resented, on my mother’s behalf, the theft of her opportunity to be overwhelmed, overtaken and overjoyed by passion. I spent most of my youth and early adulthood navigating feelings of embarrassment, confusion and, most significantly, sadness for my mother about their union.

Over time I came to understand my parents’ marriage from their distinct expressions of affection. My father was undeniably devoted to her from day one. She was the love of his life, without question. My mother was deeply appreciative, fond and admiring of him. But in love? I reasoned that my mother had accepted her own marital fate as being absolved of romantic love but rewarded with a wonderful life partner.

I am certain that in a contemporary day and age, no one would have thought to set my parents up on a blind date; the differences in their personalities, interests and lived experiences would have precluded the thought. It was through their unmodern, uncontemporary marriage, however, that this seemingly mismatched pair discovered that their differences served as a lovely accent to the far weightier and more meaningful commonalities they did share.

It was in the fall of 2011 that my father died of metastatic cancer. Despite the devastating sadness that surrounded us at that time, I am always reminded of one, lingering image. That of my mother in a reclining chair next to his hospital bed. She stayed there, ready to be woken up at all hours whenever he was in pain or felt like chatting or wanted to play cards. She was close enough to stroke his hair as he slept or kiss his cheeks, his forehead, his lips, in an effort to pull herself even closer. I was 35 years old when I first saw my mother kiss my father on the lips. Until then, it hadn’t occurred to me that their journey, from its un-sitcom-like beginnings to its heartbreaking end, was a true romance, a romance for the ages.

And when he died, she cried for the loss of the love of her life, the one she met, 41-years ago, through a beautiful arrangement.

We fell in love over the phone, and it gave me the confidence to love myself
February 14, 2020 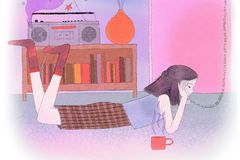 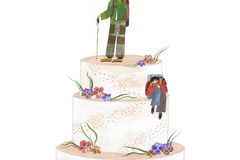 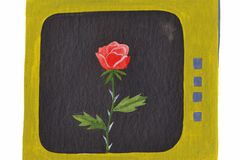