Their names were Lillian and Mary. They lived on neighbouring farms for over 40 years and while I was witness to their friendship, I never heard them call each other anything but Mrs. Ireton and Mrs. Thompson.

It was common in rural Ontario in the 1940s for three generations to live under one roof as was the case in my early years. An aspect of that was captured by Margaret Lawrence in The Stone Angel. “Privacy is a privilege not granted to the aged or the young,” she wrote. “Sometimes very young children can look at the old, and a look passes between them, conspiratorial, sly and knowing.” Even though I had two parents, brothers and sisters, I tagged after Gran in particular. Mostly, I just watched her, starting in the morning as she brushed her long hair, braided it neatly and pinned it into a bun. She was good at so much. She could sew and knit and cook and make butter and lye soap. She and my mother grew a fine garden and baked every day in the big farm kitchen.

The one event that I never wanted to miss was a visit from Mrs. Ireton. She and Gran visited each other’s homes monthly for many years. They did not belong to the same church and, therefore, not to the same ladies groups, but their friendship was solid and lasting.

A day or two before a visit, Gran would make something special, out of the ordinary, such as headcheese, chilled in a little mould and turned out just before serving. There would be freshly baked bread and her own churned butter and pickles on the side. Sweet treats came later. Always, there was tea made in the good china pot and served in the best bone-china cups.

It must have been their little rituals which fascinated me. Mrs. Ireton always wore a very fine dress, usually black with white lace trim. Gran would have earlier removed her apron and put on a fresh medium-good dress. The visit always took place at the big kitchen table where a small embroidered cloth was placed diagonally to cover the oilcloth. There seemed to be an unspoken family rule that the little oasis of quiet conversation was not to be disturbed by children, dogs or busy adults coming and going. That is why it never occurred to me to utter a sound as I peeked at them from my perch on the little table behind the wood stove.

I rarely heard what they were saying. They talked in hushed tones, very often seeming quite serious and at some point during the visit, Mrs. Ireton would reach up her sleeve and pull out a lace-trimmed hankie to wipe away some tears. This crying disturbed me a bit but the most intriguing part of the visit was the surprise. Mrs. Ireton never failed to seem genuinely surprised when about an hour after her arrival, Gran would say,

"Would you stay for a cup of tea, Mrs. Ireton?"

“Oh, no, I couldn’t put you to all that trouble, Mrs. Thompson.”

“It wouldn’t be any trouble, Mrs. Ireton. Let me put on the kettle.”

“Well, if you’re sure. Don’t go to any trouble, mind. Just a cup of tea would be lovely.”

And out would come a delicious spread that could include potted meat, fresh bread and sweets such as date squares, or depending on the season, there might be maple syrup or grape jelly. All as good as a Champagne toast to these silver-haired ladies.

After 30 years of bias, I finally fell in love with motorcycles

Once I had a kitchen of my own, I often took out a recipe in Gran’s or my mother’s handwriting and prepared something that connected to those early years. For whatever reason, I decided a few years ago to try making headcheese. It took the combined efforts of five relatives to put to together a recipe from memory. The opening instruction was: “boil a pig’s head until the meat falls off the bones.” Undeterred, I went to my butcher shop and asked them to order a pig’s head for me. Two young apprentices looked at each other, then at me, then at each other. The request may have come too close on the heels of their studying Lord of the Flies, because the response was, “We will have to wait until Pete comes back.” Pete, my trusted butcher, eventually substituted pork bellies and hocks for a head and I proceeded to make headcheese, or potted meat, in honour of Gran.

Common sense should have dictated buying much less and experimenting but I started to cook all of it, covering the stove top with every large pot in the house. On returning from work, my partner peered at me through the head of steam, indulged in a Swiftian moment and said, “Please tell me you are not boiling the neighbour’s children.”

The final product was tasty, flavoured with summer savoury as it used to be. There was far too much of it but more people were tempted to taste it when it was offered as potted meat and proudly announced as brawn.

It is pleasant when good memories linger. The farm is still in the family and even though the stove and little table behind it are gone, when I sit in that kitchen, I can picture those oh-so-civil tea scenes and hear my grandmother say, “No trouble at all.” 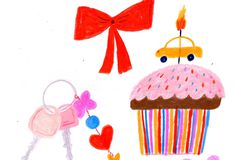 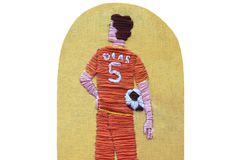 This overstuffed old house is my last link to my parents
March 14, 2019 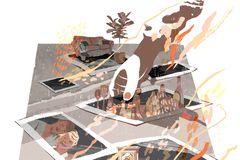