An exit card is a written student response to a question posed at the end of a class. Students give their exit cards to the teacher before they leave the classroom and we use them as a quick check to see what they really remembered from the lesson.

I am retiring from teaching. This is my exit card.

Teachers learn just as much from students as students learn from us. These are a few of the things that I learned in my career.

Roger was physically and mentally delayed, looking as if he belonged with primary students, not Grade 8 students. About once a month we would have a dance in our classroom. Roger was a bit out of his element when it came to asking a girl to dance with him. He would dance the fast songs with the rest of the group, and then retreat to a corner when the slow songs came on.

Once, I noticed that Roger was slow dancing with Leah, one of the more popular girls. He had the biggest smile on his face. The next day, when Roger left my classroom to work with his support teacher, I spoke to my class. We all knew that Roger was different but that simple act of including him in a slow dance was such a classy thing to do. Not only did Roger ask Leah at our next dance, but he proceeded to ask every other girl in the class to dance. No one turned him down; no one made fun of him. Roger never retreated to the corner. Leah taught me about the kindness of a simple act and its profound effect.

Daliah reinforced the positive influence teachers can have on students. She was close friends with Giulia, Denise, and Vicki. They all excelled at school, but Giulia was the leader. When it came time to choose a Grade 7 representative for student council, they put Giulia’s name forward. At the end of the year, I told Daliah that she shouldn’t always play second fiddle. She was just as capable and shouldn’t hide in Giulia’s shadow. The following year, when it came time for student council elections, she ran and was elected vice-president. Daliah came up to me and said, “I took your advice, Mr. C., and I won. I wouldn’t have done it if you didn’t believe that I could.”

A classroom is a microcosm of society and in the classroom, you will find tiny acts of bravery. It was Serena who demonstrated that bravery is “the capacity to perform properly even when scared half to death.” Serena was our play’s narrator. She was scared that she would forget her lines. “If you forget your lines,” I advised, “then just pause, stare out at the audience and take time to remember. The audience will think the pause is part of the play.” Halfway through opening night, Serena forgot her lines. She stared out at the 300 people gathered in the gym and didn’t flinch. After what seemed like an eternity, Serena remembered her lines. After the performance, she burst into tears backstage, thinking she had let everybody down. When our principal came back to congratulate our cast, she turned to Serena and said her pause worked so well you could hear a pin drop. Little did she know about Serena’s little act of bravery.

How do you teach someone how to mourn? The most difficult lesson was giving voice to a group of Grade 8 students who had to deal with the sudden death of one of their own. We had followed all of the school board counsellors’ advice, yet my students felt that it was not enough. They each had something that they wanted to say, they just didn’t know how. I gathered all the Grade 8s in the gym one morning. We sat in chairs forming a big circle and placed an empty chair in the centre. We all faced in, looking at the empty chair. I told the students to imagine that she was sitting in that empty chair and to use this opportunity to say what was on their minds. One by one they began to share how they felt, in song, with poems, through laughter and tears.

Then it was Lexie’s turn. She had an argument with the deceased prior to her death. Lexie struggled and through her tears, she apologized for the silly and hurtful things that were said, and then added how much she missed her. It is important to let kids participate in things that can be heartbreaking; things that no 13-year-old should deal with, but sometimes have to.

Most 13-year-old boys do not have it together. Nico was the exception. He was athletic, smart, good-looking, popular and humble. Audrey was the opposite. She was clumsy, struggled in school and had a few friends. Audrey had a crush on Nico and one day she decided she was going to tell him how she felt. As the rest of the class left for recess, Audrey poured out her feelings to Nico in the hall. Unbeknownst to them, I listened from my classroom. I assumed that Nico would reject her and I prepared to stop him from laughing and teasing her. I know how cruel students can be.

Instead, Nico thanked her for sharing her feelings and for saying all those nice things about him. He asked if they could be friends instead and invited her to play basketball with him. She smiled and accepted his offer. I watched from the classroom window as he came out with her, and made sure that she was on his team as they played. They came in together from recess, Nico telling Audrey that she was pretty good at basketball. He promised he would help with her shooting. Audrey was on cloud nine.

I was dumbfounded. When I was in Grade 8, we spared no one’s feelings and I cringe at the horrible things we used to say to each other back then.

A few weeks later I told Nico that I had overheard their conversation. He smiled his bashful smile and replied that he knew how hard it was for her to say those words and that he didn’t want her to feel bad for saying them. I said, “You are more of a gentleman at age 13 than some adults I know.”

Teachers spend hours crafting lessons to impart the skills and knowledge dictated by a government-mandated curriculum. It is in that live interplay between teacher and student where we tweak lessons, keep what is good and throw out what is bad, where we see lives being lived and experiences being encountered. A good teacher listens to his students and learns from his students. And often it has nothing to do with curriculum.

One teacher believed in me - and that’s all it took to turn things around
September 2, 2021 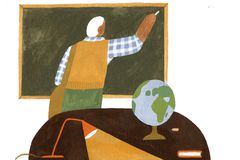 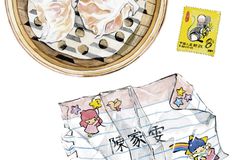 Handwritten letters are a powerful tool of friendship
August 30, 2021 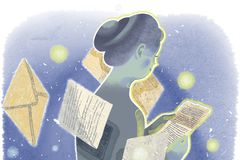