Frederick Biro
Contributed to The Globe and Mail
Published May 12, 2020 Updated May 12, 2020
Comments
Please log in to listen to this story. Also available in French and Mandarin. Log In Create Free Account

The other morning, my significant other caught me stacking my album collection in alphabetical order. I was immediately accused of self-isolation desperation (not without some justification, to be fair). However, this was a long-planned task made even more timely by being house bound. It was also challenging, given the volume and categories, thus a welcome diversion. At one point, the entire dining-room table was covered in various piles, representing rock, classical, newer albums (courtesy of my son) and a potpourri of other genres.

I bought the bulk of my record collection when I was a teenager and continued into my early 20s. It mirrored a period when I began the first of numerous hitchhiking trips to Europe. It was a simpler time in many ways and music was more homogeneous. Whether I was in a bar in Amsterdam, a coffee shop in Cologne or a disco in Arenys de Mar, Spain, I would hear the same songs and artists played. My first extended holiday was fuelled by listening to Neil Young’s Harvest; Carole King’s Tapestry and Cat Stevens’ Teaser and the Firecat. In that Spanish disco, the last song played every night was from that album: Morning has Broken. I can still see my friends dance and pivot around the floor until the lights came on – friends that came from around the world, many of whom I remain in touch with decades later.

The music from that time had a profound and lasting impact in my life. My children grew up listening to my stories, seeing the pictures and have even met many of the individuals from that Spanish disco. Morning has Broken is the song my daughter and I danced to at her wedding and, a couple of years later, was featured at my son’s wedding, too. I believe that song connected them to a younger me at a pivotal moment in my life and in their own.

With the physical distancing and self isolation of COVID-19, I find myself turning back, not just to the songs of my generation, but to music that has soothed, consoled and inspired me throughout my life.

Daily matches of cribbage or Scrabble with my spouse are played to the music of artists as varied as Joan Armatrading and Bon Iver (a more recent find championed by my son). A word of caution: Do not play Beethoven’s Ninth Symphony when indulging in these activities as it may result in an adverse reaction from your opponent.

When I recently received some challenging personal news, I reached for the album containing Adagio in G minor. A recent birthday celebration included the iconic When I’m Sixty-Four from Sgt. Pepper’s Lonely Hearts Club Band, which I had purchased more than 50 years ago from Toronto’s almost-as-famous Sam the Record Man on Yonge Street.

A few nights ago, I unearthed a rare album for dinner, namely Dory Previn’s live performance from Carnegie Hall, recorded in April, 1973. It resulted in an unexpected joyous waltz to Twenty-Mile Zone; a tune that speaks to the insanity of modern life, truly fitting for these crazy times.

This is not to say that I am an album snob. I recognized the value of cassettes (thank you Sony Walkman) and later on, CDs. In fact, truth to be told, CDs are still a better proposition for home exercise as it negates the need to flip an album in the middle of jumping jacks. Fortunately, I have an ancient boombox so I can motivate myself with upbeat rhythms from artists as varied as Phil Collins to Lady Gaga.

I continue to purchase music, too. Just this week I preordered the second record from a British group named Boston Manor. But, yes, I bought it on vinyl.

I understand that just about all of the music I listen to can be obtained through streaming services. For many, this is the best way to access the music that moves and motivates them. For me, however, it does not replace the tactile feel of placing a record on the turntable or the richness of the sound from my speakers. Online music cannot match the questions and intrigue I felt years ago when I opened my new Sgt. Pepper album and noticed the Ontario Provincial Police patch on Paul McCartney’s shoulder. It could never fuel my curiosity in the same way as I pondered the album cover for Led Zeppelin IV. What does a farmer with a bundle of thatch on his back have to do with Stairway to Heaven anyway? I know I could Google the answer but somehow that would not be right.

Ultimately, handling my albums and listening to songs that are the soundtrack to my life takes me to a simpler, happier time. These days, I find that incredibly valuable.

One day we will be given the all clear. We will be able to visit with family and friends and go back to supporting our favourite little shops and restaurants. When that day comes, I will open the windows and patio door. I will reach for Teaser and the Firecat. I will sing a duet with Cat Stevens as we belt out the lyrics to Morning has Broken.

I’m sure my neighbours won’t mind. They may even join in.

TikTok Mama: How I bonded with my tween in isolation
May 8, 2020 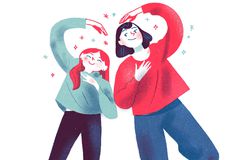 It’s amazing what you learn about yourself while cleaning toilets
April 7, 2020