“Some couples should not share a double kayak,” said the guide who came up beside us as my husband wildly waved his paddle in the air.

My husband and me were fighting in the double kayak.

It was 2005, and we were kayaking with a group in Desolation Sound, up the B.C. coast from Vancouver. The rain was dripping into the water; a seal came up behind the kayak and then disappeared. It was beautiful, but we had missed a part of it while we were arguing. I had volunteered us for the double kayak, dreaming of a romantic shared experience, while my husband looked leery about my expectations. In retrospect, my husband and the guide were right – we would have enjoyed our time better together while each paddling our own boats.

The guide’s comment reminded me that I’ve tended to make assumptions and control experiences rather than enjoying the moment and letting the current flow. I have often pondered that moment since. After that trip, I realized the trick to our relationship was in how we could balance shared experience with personalized autonomy – how we could move in parallel without being too tightly coupled on our path.

We never fit the cliché of a traditional relationship. We met in 1999, when I was sleep-deprived after a night shift as a neurology resident. He was a chef, and served me a coffee. As a pickup line, he told me he was a man of the 90s, able to cook; I told him I was a woman of the 90s and couldn’t. He then told me his favourite medium to work with was chocolate – almost too much to bear. The rest was history, as they say.

We had some idyllic months while first dating, until reality struck. As we settled into our relationship, I told him he needed to change his cooking habits because I was exhausted from trying to run off the calories. I was too focused and found him to not be focused enough. I liked to plan, he preferred spontaneity. We repeated these criticisms, not always seeing the strengths in the other’s approach. While we sparred, life happened. Our relationship dynamics appeared to follow a pattern: first careening through challenges like unplanned pregnancy and rushed marriage, followed by my deliberate deceleration of our lives, buckling down to study and pass my neurology fellowship exams within the same year. We’ve always gotten to our destinations and goals, but our marriage has never smoothly glided over the waves.

We moved to Vancouver, and he became the caregiver for our two children. On the surface, he was the “househusband” stereotype: cooking, nurturing and maintaining our home. However, I never thought of him in the traditional domestic role. In fact, he wasn’t much of a “housewife,” instead contributing to a chaotic and messy home. He held multi-course dinners for his friends, keeping our children up late while music blasted and dishes piled up. But I began to see the beauty in this different type of household, watching our children being soothed by hairy, muscled arms. I learned to not expect a Martha Stewart-style home. The children were cared for, and I was the family breadwinner with a full-time medical practice. Somehow, our unusual relationship dynamic kept us afloat, and I learned to love the swirling whirlpools of my husband’s currents in the otherwise slow-flowing routines of our lives.

At times, I chafed at the responsibility of being the primary earner; he chafed at the need to feed a toddler three times per day, when humdrum routine interfered with adventure. It was during these ruminations that we stepped into the double kayak in Desolation Sound. In a way, our guide rescued our marriage when he saw our distress flare across the water. He altered our relationship’s trajectory with his uncomplicated advice that day. After that day, we began to learn to communicate about where we each wanted to go together, charting a course back to each other’s priorities and values. After that day, I resolved to hold my husband’s journey and goals front and centre as I knew he would hold mine, tacking our relationship’s course as a co-ordinated team.

Since then, despite our best efforts, there are still some times of tumult. We have each made mistaken assumptions about what was best for the other. I don’t know what I was thinking when I decided he should perform yoga each morning before starting his 7 a.m. baking shift. The yoga video would advance from the first lying-down corpse pose while he stayed supine on the ground, snoring. And he’s been similarly deluded at times. I took up cycling to support his interests, dreaming of meandering aimlessly in sync. Our relationship temporarily hit a speed bump after he exhibited his coaching fervour, yelling at me to sprint for badges on the Strava activity app. Each time, a clarifying conversation has reoriented us.

This year marks our 20th year of marriage. Each new year, he humours me as I seriously ask whether we should stay the course for another year. We converse about our individual and shared intentions for the upcoming year, strategizing about how to integrate his adventures into my plans. This planning has helped us to reach further destinations than we would have ever achieved individually. I feel comfortable with the scheduling, and he doesn’t feel constrained in pursuing adventures. Feeling confident in my husband to serve as an anchor if needed, I have sailed further than I ever imagined: becoming a physician, an associate professor, an associate dean, a mother and a wife. I think our sustained enthusiasm for our relationship is in the thrills of surfing over shared waves of family drama balanced with the joys of gliding over still seas of routine while we remain tethered on our individual paths.

We’re charting new territory as a family; our eldest is in university, and she’s drifting down her own tributary. Unexpectedly, my husband has wished to moor the boat, encouraging my daughter to stay. I see his pride in what he built for our family, and his joy in memories of school trips and lunches. Conversely, I wish to see her move forward, having observed her elegant navigation toward her own success. Maybe I’m recalling my own ambitious career path as a woman – I want her to experience the same thrills in life’s ups and downs. And now, I want to provide a base for my husband to launch renewed career goals and exploits.

Through this journey, I am secure in knowing that after we steer through this fork in the river, my husband and me will paddle down the new passage together. However, despite where we have come to and where we have come from, I still won’t step back into a double kayak with him. Instead, I would rather take my own kayak and float down the river, buoyed by him cresting the rapids. That kayaking guide’s advice has never steered me wrong.

Love me, love my canoe: following my boyfriend into the backcountry
July 31, 2020 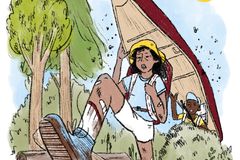 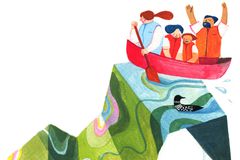 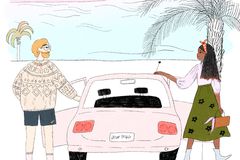