Montreal is lifting its 65-year-old, Prohibition-style ban on street food, providing hope for sidewalk foodies and ending a quirky distinction for a city reputed to be among the gastronomic capitals of the continent.

With a quick nosh on a pulled-pork taco, Mayor Michael Applebaum signalled Tuesday that Montreal was not only terminating its ban but raising the culinary stakes in Canada's second largest city: It wants to carve out a niche for unique street cuisine "à la montréalaise."

"One thing we want is that when people come to Montreal and eat from one of these trucks, they're going to know this is something special, something they can't get anywhere else," the mayor said at a news conference behind City Hall.

The freezing-out of food carts has long been one of Montreal's more distinctive and incongruous urban traits, dating to a time when the trucks were seen as a threat to hygiene and scourge to public order. Pressure from established restaurants also kept would-be hot-dog and crêpe vendors off the streetscape.

With an eye to those concerns, the city is bringing in la bouffe de rue on a slow simmer. Trucks will be limited to 10 sites downtown on a trial basis beginning June 10. Candidates will be selected by a city committee, must be offshoots of existing caterers or restaurants, and do most of their food preparation off-site.

Tuesday's announcement not only let City Hall try to take corruption and street protests off the front burner. It also offered hope for budding entrepreneurs in a city with well-regarded chefs.

"Montreal can show it can distinguish itself as a culinary destination for street food," said Guy Vincent Melo of the Quebec association of street restaurateurs. "We've taken junk food out of our schools. We shouldn't be putting it back on the street."

Still, in a province that celebrates smoked meat and invented poutine, ruling out low-brow fare might not be an entirely popular move. A city committee will oversee not only the location for the food trucks but also what type of fare they dispense. The mayor said the committee will try to ensure the food "is of a quality that is going to be highly respected and renowned," but "maybe someone's going to come with poutine – a very special type of poutine."

Some likely contenders to break the decades-old embargo have already been dispensing their goods at restricted locations around the city, such as city festival sites. (Technically, that meant they were not on a public thoroughfare and in violation of existing bylaws).

These include Grumman 78, whose chartreuse-green, converted fire-command truck was parked behind City Hall and served Mr. Applebaum his Vietnamese-style taco and tomato salad with cornbread croutons.

Chef and co-owner Marc-André Leclerc, who has worked at such noted Montreal eateries as Au Pied de Cochon and Joe Beef, says no one should expect fine food to rule the streets of Montreal forever.

"In an open market, there's going to be natural selection. Inevitably, we're going to see hot dogs and pretzels," Mr. Leclerc said. "If there's a demand, there will be a market."

The Montreal ban on food carts dates to 1947, when the city banished its "chip" wagons on the grounds they spread litter, flouted traffic rules and unfairly competed with small businesses; successive municipal regimes seemed disinclined to change the rules and established restaurants remained steadfast opponents. However, the Quebec association of restaurateurs, representing the city's 5,000 restaurants, now says it can live with the pilot project, partly because the vendors will be linked to establishments that pay taxes, a spokeswoman said Tuesday.

If experience is any guide, the trucks will not lack for customers. A food-truck gathering outside Montreal's Olympic Stadium last summer drew such long lines that some trucks ran out of some menu items.

Dare Foods not so sweet on Quebec bakery’s choice for cookie name
February 8, 2013 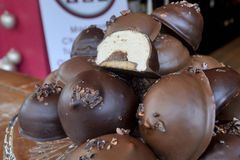