Fifty years ago, Canadians threw a record-setting 100th birthday party in Montreal. Over a million people flocked to Expo 67's opening weekend, smashing previous attendance records for North American World Fairs. Lineups outside the gates were so long, officials decided to let people in early and the Métro de Montréal was so busy that the subway had to shut down to take a breather. Worst of all for the hungry hordes queuing up, Expo ran out of food. As one reporter put it, even the "Chinese food take-out spots were down to a single dish – chicken fried rice."

Emergency catering trucks arrived to restock, but some foods were harder to replenish than others. After all, many of the attendees had been lured in by the promise of "Creole Gumbo, Prairie Grouse, Mutton à la shaslik, Suckling Pig and Viennese Apfelstrudel," as well as other "authentic foreign dishes that you'd find only on a world tour, any other year."

"For a lot of people, it might have been their first experience eating out at a place that wasn't a Chinese-Canadian restaurant or a pasta place," explains Fraser Valley University's Dr. Lenore Newman, author of the book, Speaking in Cod Tongues: A Canadian Culinary Journey. "I mean, there were barely restaurants as we know them today. It was not a foodie time."

Nor were many Canadians likely to have experienced a world tour in that era, before the invention of the no-frills airline. Expo 67's restaurants, bars and snack kiosks (70 in all) represented a first chance to try food and drink from relatively close destinations such as Barbados and Jamaica, let alone Burma, Thailand or India. The Mexican pavilion, shaped like an Aztec pyramid, offered pollo con mole and tequila. Visitors to Cuba started off with a lesson on the evils of capitalism before moving on to shrimp cocktails, lobster dinners and mixed drinks: the L'Anejo Fizz, the El Centenario and, of course, the Cuba Libre (for those who really wanted to linger and contemplate the virtues of socialism, aged rums and fine cigars were on offer in the handsome bar).

Geisha girls served tempura and sake in Japan; Austria offered beer, schnitzels and sachertorte and a tour of Scandinavia included smoked fish, cold meats and plenty of aquavit. India blew people's minds with three types of bread – naan, chapati and paratha –as well as Mulligatawny soup and tandoori chicken. People came away with a worldly affinity for Russian caviar, African coffee and Italian grappa. In the Guyanese pavilion, people kicked back with rum cocktails, such as Guyana's Bim Bam Boom and Jamaica's Yellow Bird, and drank in the sounds of noisy macaws and soft Calypso.

Obviously, it all had a huge effect on the audience's tastes, creating a demand for a wider range of restaurants across the country. It was more than just a global food fair, though. Expo 67, which marked the country's centennial anniversary of Confederation, also represented a new vision for Canadian identity that was open, modern and multi-cultural.

"The cuisine of Expo 67 was aspirational in that it really did help start that discussion around multi-culturalism," says Newman. "And it definitely gave something for Pierre Trudeau to hang his hat on." The future Prime Minister would promote this new image of a diverse, multicultural nation where people could embrace difference and re-invent themselves to create a new narrative as an antidote to tensions that had lingered since Confederation: Western alienation, Maritime poverty, Québec separatism and the colonial violence against First Nations' people. Multiculturalism was a reinvention of the country's ethos.

There was just one problem: How best to represent Canada, a loose confederation of diverse provinces, in its own pavilion where Fort Edmonton offered flapjacks and steaks, Ontario served up Brampton chicken with Niagara peaches and Atlantic Canada featured giant lobsters, oysters and clam chowder. Inside Katimavik, as the inverted pyramid-shaped Canadian hub was called, there was one, unifying showstopper of a restaurant, La Toundra, which sought to weave together all of these regional differences. To get there, visitors walked past the People Tree, an exhibit with images of ordinary, working Canadians, groovy new maple leaf flags and pennants with inspirational sayings, such as, "We cannot dwell in a house together without speaking to one another." Inside, visiting foreign dignitaries and well-heeled Canadians ate prairie grouse, bison meat and muktuk served up by women in scanty, sealskin go-go outfits.

"They were dishes almost no Canadian would have ever eaten," says Newman. "They really didn't have a national cuisine to draw upon, so they invented this Disney-fied, imagined idea of the Inuit culture and the North. And it was crazy." The exercise did not spark a demand for muktuk restaurants, but it did get people thinking about what Canadian food was and could be. Until then, fine dining had meant Continental French, something that's hard to imagine given that now, 50 years later, regional Canadian cuisine is well defined and restaurants reflecting the food traditions of newcomers are world-renowned. Expo 67 was the beginning of this: a new vision for Canadian food, not to mention Canada itself. 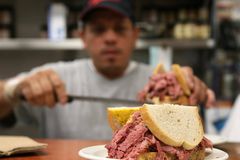 Montreal’s McCord Museum resurrects forgotten fashion moments of Expo 67
March 13, 2017
Three Canadian beers you should try
April 20, 2017
Follow us on Twitter @globeandmail Opens in a new window
Report an error Editorial code of conduct
Due to technical reasons, we have temporarily removed commenting from our articles. We hope to have this fixed soon. Thank you for your patience. If you are looking to give feedback on our new site, please send it along to feedback@globeandmail.com. If you want to write a letter to the editor, please forward to letters@globeandmail.com.
Comments