Growing up in Newfoundland, Langdon Hall's grand chef, Jonathan Gushue, remembers weekends spent with his family, learning not only how to cook but also how to value seasonal, local ingredients. Decades later, Gushue still uses the same principles to create his award-winning fare.

Before landing at the Cambridge, Ont., luxury inn Langdon Hall, the 41-year-old chef started his career in high-end hotels. He began as a breakfast cook in a Northern Ontario chalet, but he says his big break came when he was hired as the executive chef of Truffles in Toronto's Four Seasons hotel, where – at 32 – he became one of the youngest chefs in North America to earn the CAA/AAA five-diamond rating (which he still holds).

You recently went to Newfoundland to participate in the Food Hike of the annual Roots, Rants and Roars festival. How was that experience?

It was very cool. Though I was a little surprised by some people's fear of food. With the half-dozen cooking students I had at the event, only one of them would try my dish. Whether they didn't understand it or wouldn't try it, the other five were just like, "No, I don't think so." So I questioned them, "Why would you want to become a chef if you don't like to eat?"

What did you cook for the event?

Fresh cod that we salted and lightly poached. Then we pressed it under a weight and flaked it. It was finished with buttermilk and leek oil and then wildflowers. It was pretty straightforward. Buttermilk is one of those ingredients you see a lot [in Newfoundland]. I grew up with it and used it in everything from biscuits to cakes to icing.

What are some of your favourite cookbooks?

I do have a cookbook addiction. A favourite of all time would have to be Pierre Koffmann's Memories of Gascony. Right now, I'm enjoying a new release from Bruce Aidells called The Complete Meat Cookbook as well as The Art of Fermentation [by Sandor Ellix Katz].

Is there a technique all chefs (including amateur ones) should master?

A really important technique for the home cook is making Hollandaise. The concept of emulsification can really help you in many different areas of the kitchen: understanding why you need to cook out your egg yolks and the importance of temperature in creating emulsification. It's a great sauce because it has fat, it has acidity; if you get into a Béarnaise, it's floral. It can also get you into a lot of dessert and pastry items.

You have three young kids. What do cook for them?

I change it up constantly. I don't like cooking anything twice for me. But they have favourites. If they ask for a meal, they will ask for an apple pancake from Brittany called a michon. Or they'll go for a pizza with anchovies, garlic and mozzarella. Or roast beef and Yorkshire pudding: That's probably their all-time favourite.

Is there an ingredient you're playing around with these days?

Whey. We've enjoyed making some sauces with it. Our pastry chef [at Langdon Hall] makes her own yogurt, so we use what's left over. Recently, for example, we took a crushed Jerusalem artichoke that we thickened into a sauce with whey and butter. We served it cold with some artichoke chips and a celery leaf oil. Everything came from the garden and we make our own buttermilk. We were really trying to create a dish that didn't just come from this area but came from this house, this hotel.

If you had to choose between bacon and eggs or pancakes for breakfast, what would you go with? 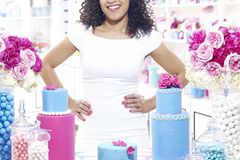 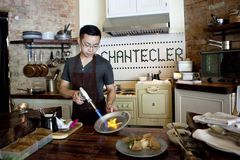