In October of last year Jamie Oliver went from culinary superstar to a Really Big Deal when the British edition of his latest book, Jamie Oliver's Meals in Minutes: A Revolutionary Approach to Cooking Good Food Fast, became the fastest selling non-fiction release in British history.

More than a cookbook, Meals in Minutes is a manifesto, a meta-recipe for living life slower by making supper faster. Cooking with fresh ingredients and sharing the results around a table with friends and family is Mr. Oliver's call to arms. And he offers more than just aspirational platitudes: He gives strategies for maximizing kitchen efficiency and then serves up 50 three- and four-dish meals, usually with a salad and a dessert. Though the ingredient list for each dish is discrete, the instructions for preparing the dishes are intermingled to maximize efficiency.

With the Canadian edition about to hit bookstores, I was eager to figure out why his book induces bouts of hysteria not seen since Beatlemania.

After a week of reading, cooking and eating, I'm still not sure.

Yes, this is an excellent cookbook, but it differs little from Mr. Oliver's formula of simple, relatable and delicious food. It's easy to fancy his version of mushroom risotto (bouillon cube and all) for its voluptuous texture and salty and savoury flavours. Combined with a spinach, mint, cucumber and pine nut salad, and an addictive mock cheesecake, this meal feels more than satisfying for less than an hour of effort.

Other meals, especially piri piri chicken with homemade nata tarts for dessert, are equally rewarding, though the cooking times for the chicken and other dishes are sometimes too short. As a result, the British title of this book, Jamie's 30-Minute Meals, seems misleading, but it's still impressive to comfortably produce a three- or four-dish meal in 45 minutes to an hour - about the time it took me.

Quality alone isn't sufficient to explain this book's popularity, nor is Mr. Oliver's fame. (I think Plenty by Yotam Ottolenghi is the best recent release from Britain, and Mr. Oliver's other cookbooks are of a uniformly high calibre, too.) So why did this book sell more than 700,000 copies in its first two months of release? My guess is that Mr. Oliver has tapped into something much deeper than our desire for mere "pukka tukka."

Deliberately or not, Meals in Minutes exploits the culinary zeitgeist: that nagging feeling we all have that we should be slowing down and relishing food together. If it works - if a family unites or a couple feels closer sharing one of these meals - I guess that is a Really Big Deal.

The grade (out of five)

Quality of recipes: Four. The dishes are delicious and easy to prepare, though cooking times could be more reliable.

Photos: Four and a half. Each meal includes several appetizing photos, many of which offer valuable instruction.

Text: Four. It takes a meal or two to adjust to instructions that force cooks to jump between dishes, but it's a tremendously efficient way to produce full meals.

Accessibility: Four and a half. The food has a distinctly British aesthetic (hence the bouillon cube), but Mr. Oliver explores a variety of cuisines using common ingredients, equipment and techniques.

Over all: Four. Kudos to Mr. Oliver for not merely complaining about the need to slow down, but for actually writing a cookbook that makes it easier to do so. 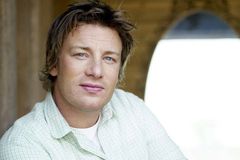