Twitter and Facebook were alive with bragging this warm Labour Day weekend, as all the hep cats talked up their new-found devotion to an old-timey activity: canning.

The urban trend of putting fruit in jars with sugary syrup, or placing cucumbers in brine, then boiling away the bacteria and socking the sealed jars in the pantry, has been growing faster than a Brandywine Red, and it's still pulling in newbies.

"I've done pickles and jam this summer – raspberry, strawberry, peach and apricot," tweeted Torontonian Catherine Hewlett, a first-timer. "And now I'm hooked." Facebook users are swapping out the smiling head shots and vacation snaps for profile pics and cover photos showing off the gem-coloured results of their home-preservation efforts.

The demand for home-canning supplies has been trending upward for the past five years, according to Canadian Tire, a go-to source for jars, rubber seals, lids, canning pots, collapsible funnels, and other food-preserving gadgets. Urban dwellers are the most enthusiastic purchasers, representing 39.6 per cent of the market; suburbanites are a close second at 33.8 per cent, while Canadians who live in rural areas purchase 26.6 per cent of the supplies.

With almost every imaginable kind of fruit and vegetable available year-round in cans, in jars, in the freezer section and shipped fresh from more temperate climes, you might wonder why anyone would go through the labour-intensive process. It's minimally cost-saving, not to mention potentially dangerous : Even if you haven't read Carol Shields's novel Larry's Party, you probably know about the home-canned beans and the accidental botulism killing.

"I purchase very little processed food, so canning became a natural extension of that," says Cara Yost of Winnipeg, in the thick of her second summer of home canning. The mother of three young girls, she adds, "I personally feel that I have a greater appreciation for food when I have worked so hard to make it."

Stylish pioneer chic goes along with that virtuous feeling (and looks so fabulous on Instagram and Pinterest). For an upscale look, say, to jazz up the open shelving above your refrigerator, German Weck jars are about $5 apiece at Crate and Barrel. These retro-looking jars have glass tops, instead of the standard metal ones, and straighter, tapered sides than the standard-issue Bernardin type.

If you were to opt for the Weck jars, then joining Larisa Kallaur-Telford's canning co-op in Orono, Ont., would set you back upward of $550. "I don't run it as a business," she says, but she asks participants to contribute 100 canning jars, plus a little money to cover the cost of sugar, salt, pectin and other preserving supplies.

For low-acid fruits and vegetables that require more rigorous sterilization to prevent botulism, she contributes her own $150 pressure cooker.

Ms. Kallaur-Telford started the co-op this year, in response to conversations she had with friends and neighbours who wanted to try canning, but didn't know how. Seventeen people signed up, including "a couple of guys, way over six feet tall."

The produce comes from the small farm Ms. Kallaur-Telford and her husband live on, with a few items supplemented from local markets. Each member of the co-op also committed to one day of planting the crops, one day of weeding and, now that the crops are coming in, one day of canning. In return, each person gets 100 jars back – filled with preserved fruits and veggies.

Last week, she and members of the co-op processed 16 bushels of tomatoes over the course of two days (they oven-dried some of them); and three weeks ago, they prepared nine pounds of chives for drying by bundling them and spreading the bundles out on an ironing board ("it was something that kept the cats away, and it has holes in the bottom for ventilation").

Canning had "always been a solitary thing, up until this year," says Ms. Kallaur-Telford, who learned the skill as a child growing up in Oshawa, Ont., when her mother processed the bounty of their 15-by-30-foot suburban backyard each year.

"I've never done this with other people – and it's kind of cool."

This summer, Grace Sanchez MacCall is rekindling her love affair with home canning. The child of immigrants from the Philippines, she first learned about preserving fruit as an undergrad at Simon Fraser University in British Columbia. "It was the social aspect. You do something fun together and at the end of the day you have all these little jars. Cherries are the best! In the middle of winter, you open one up and it's just like summer again."

Ms. Sanchez MacCall is looking forward to introducing one of her mommy friends to canning. They'll process the juicy, local peaches she bought at the farmers' market at East Lynn Park near her home in Toronto, and catch up while their children play.

After about five hours, she'll have a supply of her son's new favourite fruit, and the next time she's at Lazy Daisy's Café, she can walk right by that display of Mennonite jarred peaches she's been buying up to now.

When you consider that a 796-millilitre tin of tomatoes goes for a buck in most well-supplied cities, the startup costs of home canning seem fairly steep. At Canadian Tire, you'll pay $49.99 for a Bernardin brand beginner's kit that includes a large pot, a jar lifter and a funnel, but only four jars. More standard 500-ml jars are an extra $6.99 a dozen.

There's a ton of free information online about how to not to kill your friends with your jarred gifts: Food Safety Tips for Canning from Health Canada is a good place to start. Sandra E. Martin 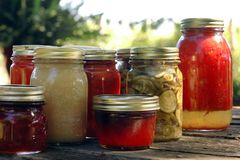 Red and green pepper jelly
December 1, 1996
Asparagus pickles
June 19, 2012
Red onion marmalade
September 1, 1997
Follow us on Twitter @globeandmail Opens in a new window
Report an error Editorial code of conduct
Due to technical reasons, we have temporarily removed commenting from our articles. We hope to have this fixed soon. Thank you for your patience. If you are looking to give feedback on our new site, please send it along to feedback@globeandmail.com. If you want to write a letter to the editor, please forward to letters@globeandmail.com.
Comments