The table is buried under a pile of bright salads and soups heaped high with fresh herbs. The sweet scent of lemongrass and lime leaf seduces our palates. Tender slices of marinated beef melt in the mouth. Unusual fish curries pique our curiosity. Dry noodles, as long as an arm, have us wrestling with hunger. If you like Phnom Penh, you'll love Angkor Restaurant, the only other Cambodian eatery in Vancouver. Opened for five years, it's still not well known, perhaps because of its unfortunate location, squeezed into a strip mall with minimal parking.

Chef Yan Huynh, who owns the restaurant with her husband, is the niece of Van Hoa and Sieu Huynh, the owners of Phnom Penh, the popular Chinatown restaurant that almost always has a lineup outside. Ms. Huynh has never worked with her aunt and uncle. And while there are some similarities between the two menus, the restaurant experiences are quite different.

Cheerful and chatty, Ms. Huynh is thrilled to talk about her background and cooking techniques. Unfortunately, her English is limited. Luckily, I'm here with Lee Man, a Chinese restaurant connoisseur and writer, who speaks excellent Cantonese.

Ms. Huynh was born in Cambodian, of Chinese (Teochew) descent. She and her family were forced to flee when the Khmer Rouge took power in 1975. They escaped to Vietnam, where they lived in a refugee camp. She wasn't as fortunate as her aunt and uncle, who received visas for Canada. Left behind in the care of a woman she calls her godmother, they returned to Cambodia after the Khmer Rouge fled the country and opened a street stall selling fish congee.

"It was sold out every morning by 8 a.m.," she says with pride. They scraped together enough to open a small restaurant in a tiny town about an hour outside the city of Phnom Penh. And there she stayed until the mid-nineties, when her family brought her and her godmother to Vancouver.

Angkor is much smaller and cozier than Phnom Penh, with less of an assembly-line feel to its service. Ms. Huynh isn't comfortable comparing her food with her uncle's. But I would say, and my dining companions agree, that the food here is cleaner, brighter and more rigorously Cambodian.

She does have chicken wings, even if chicken wings aren't authentically Cambodian. (Cambodians don't like fried foods, she explains.) Her uncle's chicken wings, tossed in a sugary ginger coating, are a cult favourite. Hers are a simpler lemon-pepper version sprinkled with fried garlic and diced jalapenos.

Rare beef salad is a must-try dish. The thin slices of beef, likely flank, are hand massaged with freshly squeezed lime juice until tender and slightly cooked. The chef says the recipe is so labour-intensive and calls for so many limes that she only makes a few orders a day and took it off the menu completely when the shortage of Mexican limes caused the price to skyrocket.

The beef is served with a slightly funky fish-and-citrus sauce in a garden-esque bowl wildly sprouted with bell peppers, red onions, medallions of tenderized lemongrass, ground peanuts and herbs. Lots and lots of herbs – mint, Thai basil, sawtooth coriander and something that looks and tastes like baby shiso.

Ms. Huynh insists that we try the Cambodian-style green fish curry on vermicelli, a rarely found home-style dish. It's made with snakehead fish, which she imports from home. The fish is deboned, stir-fried with lemongrass and ground to a mash, which is steamed in coconut milk lightly tinged yellow with turmeric.

Cambodian beef lemongrass green sour soup is another unusual dish she recommends. It's not terribly attractive – a clear broth with a fatty bone of well-stewed beef back kicking into the air. But the water-based broth is deliciously sweet with palm sugar, fragrant with kaffir lime leaf and sour from tamarind. The beef, which was likely preblanched to remove all the blood and rank beefiness from the bones, is soft and tender.

Phnom Penh dry egg noodles with sliced pork, ground pork, pork liver, pork heart and prawn is a common Cambodian dish with many variations. The offal isn't overly gamey, but the noodles are so long you'll have to work to get them out of the serving bowl and onto your plate.

We're the last customers of the night, but Ms. Huynh is in no hurry to rush us out. She's quite happy to keep chatting about everything under the sun: how much she misses Cambodian sandwiches (better than Vietnamese banh mi), the dishes she can't make without a charcoal grill, fertilized ducks eggs (men like them more developed with lots of feathers on the embryo, which apparently promotes virility) and whether or not she'll return to Cambodia after her children graduate from school.

Isn't it hard life over there? "Oh, you suffer everywhere," she laughs. "If you don't suffer, you don't succeed."

She has certainly succeeded. Perhaps not as much as her uncle, whose fans are ferocious. But if they ever get tired of waiting in line, they might want to consider venturing off the beaten track to check out his niece's fabulous cooking. 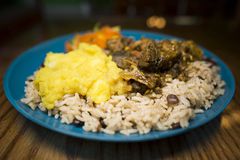 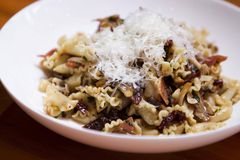 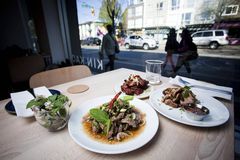