At a much younger age, something that made me crave pizza more than anything was watching the Teenage Mutant Ninja Turtles on a Saturday morning. Their pizza-eating was animated (figuratively and literally), but also often as a reward for a job well done.

Could my brother and I also get a gigantic pepperoni pizza if we sought out an evil villain and battled to victory?

At the time, the pizza in Saskatoon wasn’t quite like what the Turtles used to eat back then. After all, this was a small city in the heart of the Prairies. Not New York.

New York-style pizza can be quickly summed up as big, hand-tossed pizzas that are at least 18 inches in diameter. Not quite thin crust, but close; the signature way to eat it is to fold it in half and devour at your desired pace.

There are two New York pizza-focused eateries in the Prairies (Calgary and Winnipeg, respectively) that locals have been obsessing over as of late.

Owned by Mike Lange, Noble Pie Pizza started out as a pop-up “hobby” project inside the slickly designed, 1988 Olympics-themed (more or less) Eighty-Eight Brewing. It has now turned into one of the hottest tickets in town.

The unexpected success grew out of an admiration for New York’s pizza culture. When his brother and sister-in-law relocated to Brooklyn in 2013, Mr. Lange made frequent visits to the city, became captivated by its pizza culture and delved deep into it, bite-by-bite.

“I was really inspired by what I experienced on those trips. There is so much history, pride and passion for pizza in New York City,” he explains. “It’s something that is hard to find anywhere else [in North America] and that really resonated with me.”

Made with a high-protein flour as opposed to the famed “00” flour used in Neapolitan pizza making, Mr. Lange’s dough is put through a multiday, multifermentation process. The result is a highly addictive crust that has a subtle tangy flavour (somewhat akin to sourdough bread) and plenty of chew.

The pizza is well worth the wait.

“The Roni” is an easy favourite here. What’s not to love about American-made Ezzo pepperoni, aged mozzarella, grana padano, pecorino, oregano and banana peppers for a little heat and acidity? With the proportions of every component near-perfectly balanced, it’s certainly worth salivating over.

The “Holy Cheesus” is almost as satisfying, made with a blend of fresh and aged mozzarella, caciocavallo, grana padano and pecorino romano, and finished off with a subtle pouring of a Brooklyn-made, chili-infused honey. As tasty as the “hot honey” is, I’d argue that this is a component Mr. Lange could make very easily using Alberta honey and locally grown chilies. This one missing local effort coupled with opting for U.S.-made pepperoni – again, instead of something more local – is about the only thing I can knock Noble Pie for.

Best bets: Pepperoni Prince and T-Bird, an order of ranch on the side

Wall Street Slice differs from Calgary’s Noble Pie Pizza in several ways, mainly in how it operates with more of a grab-and-go and delivery focus. Primarily owned by Steffen Zinn and Quin Ferguson of Red Ember Common and just down the road from Barn Hammer Brewing, the unassuming and inviting location on Wall Street boasts vibrant graffiti art as well as wooden-slat bench seating attached to a few communal tables.

Even when visiting on a mid-afternoon on a Sunday and only open less than a month, the place is buzzing. There’s plenty of pies cooked and ready to go a la slice, and they all sound worthy of trying out.

Admittedly, the latter sounds the least desirable (I mean, kale pesto?), but things are not always as they seem, as “T-Bird” comes out on top as the tastiest of the bunch. The well-seasoned turkey sausage was surprisingly juicy, while the pesto, feta and mozzarella intermingle happily along with the brightness of the bits of pepperoncini peppered across my slice.

It’s hard not to compare the pizza crust almost immediately to Noble Pie’s as well as Slice’s sister eatery, Red Ember, and, admittedly, it is the most lacklustre of the three. Not disappointing by any means, but I have to wonder if the pizza dough itself would garner a thumbs up from a New York-style pizza purist.

What this pizzeria lacks in a captivating crust, it makes up for with a delicious homemade spin on ranch dressing, laden with fresh herbs, to dunk into. As well, Zinn and his co-owners penchant to locally sourcing is commendable. Meats used as toppings here come from Zinn Farms and the flour used for their dough is ground locally. 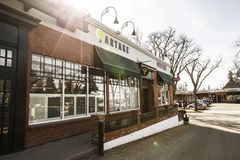