Jamie Oliver's first North American outpost opened at the edge of the Yorkdale Shopping Centre early this winter. The two-storey restaurant is an island of scratch-made pastas and pizzas, tiramisu martinis and "happy chicken lollipops" in a sea of upmarket shops. The menu is Italian, as imagined by a half-a-billion dollar (give or take) multinational restaurant corporation and executed by Toronto's King Street Food Company. And it is fronted, of course, by one of the planet's most-loved man-children – even if only in the two-dimensional way.

Mr. Oliver's image is ever-present here, in the pictures on the walls and on the cooking shows that play above the bar. The restaurant's menus are all signed "Big Love. Jamie x," and "Cheers! Jamie O x," like billets-doux that also happen to be bills of fare. Jamie's Italian has about 65 locations in 14 countries, and it is but one piece of an empire that includes publishing, recipe development (the chef's column appears in the weekend Globe Style pages), television production divisions, hit YouTube channels (check it out; you can watch him stuff a red chili in his pants), retail licensing and not-for-profit arms as well as multiple restaurant and catering brands.

But Mr. Oliver's greatest trick, ever since he first appeared in 1999 on The Naked Chef, has been to build an empire while looking like the last person on Earth who would ever be an empire-builder – and to do a little good along the way. It works too, a lot of the time. That Yorkdale outlet is a rare chain restaurant that doesn't feel cynical. It's not all excellent, but some of what they do there is exceedingly good.

See the chef, the room and the food at Jamie's Italian at Yorkdale

The pastas are the best of it. They're made from scratch each day by real chefs and taste that way. (King Street Food's Frank Venditti, who came here from the company's Bar Buca, is head chef.) The fresh crab spaghetti I had one night last month was a delicious toss of capers, chilies, parsley, lemon, anchovies and chunks of B.C. crab – seashore southern Italian simplicity – all tangled up in excellent al dente noodles and slicked with olive oil. The restaurant's prawn linguine was even better – fresh and sweet from white Gulf prawns, fish stock and saffron, and punchy from tufts of peppery arugula and cherry tomatoes that had been quickly concentrated in the heat.

And the Bolognese – by far one of the best things on the Jamie's Italian menu – was better by many orders of magnitude than I had expected to find. The sauce, from Mr. Oliver's mentor (and fellow manic food television personality) Gennaro Contaldo, is built on pork and beef, stock and tomatoes, wine and herbs, and its flavour is powerfully rich and warming. The tagliatelle underneath it a masterclass in fresh pasta's chewy-silky bite.

The restaurant's starters were less accomplished. The fried squid was ill-timed and overseasoned when I had it. The "Sicilian caponata bruschetta" would have been better if the caponata hadn't just come from the fridge (it was too cold to taste like much), and the "world's best olives on ice," as the Jamie's Italian menu calls them, were about as good as you can easily find at your local Loblaw's olive bar, but served in a caviar set-up. They work out to the absurd price of $1 apiece.

By contrast, the caprese salad, made with roasted cherry tomatoes, was very good, as were the mozzarella-stuffed arancini and the meatballs. The pizzas, served on crisp, lightly charred crusts, are reminiscent of Terroni's; the mushroom version is a standout.

The mains are hit and miss: The 10-ounce, wild-mushroom-topped, dry-aged rib-eye a thing of beefy, unassailable beauty, but the baked wild salmon dry and bland.

Jamie's grilled chicken served in puttanesca sauce was a study in what can go wrong when a chain restaurant tries to retool powerfully flavoured dishes for the masses. Puttanesca should be briny from capers, fishy from anchovies, sweet and tart from tomatoes and fiery from red chili peppers. The puttanesca here was puttanesca as it might appear at a midwinter luncheon for the Bristol Indoor Bowls Club; the sauce could just as easily have been made from flannel draperies and fusty cardigans, for how little flavour it bore.

But the kitchen's "Italian farm sausage," a twisty length of grilled pork and fennel sausage, served with caramelized peppers, had no such deficiencies in the flavour department, and Mr. Oliver's "burger Italiano," though Italiano in spirit only, was also not at all bad.

That burger is jammed with vegetables and condiments: pickled hot peppers, pickled cucumbers, crisp fried onions, red pepper-based salsa rosso, fontina cheese and crisp cured meat. The combination of these textures and flavours, of the fat, salt, spice and pickled vegetable pop, is excellent. The only part of the Jamie's Italian burger Italiano that doesn't measure up is the beef patty at the centre of it all. It was dry and lifeless when I tried it, which wasn't a tragedy, but with a bit more care, that burger might have been twice as good.

The kids menu at Jamie's Italian shines, though: It's one of the first kids menus I've found that I didn't regret handing to my son. There's steamed salmon with vegetables, seed-crusted chicken tenders and a pretty good (read: My kid loved it) spaghetti and meatballs among the choices. The kids meals come with "fruity water" – that's regular water, but with berries and mint leaves in it – and milk or juice and a "shake-me salad" that the kids are meant to dress themselves, in a sealed jar. The jar my son's shake-me salad came in didn't seal quite right, so the salad and the dressing and the jar's lid went flying across the aisle and splattered the floor as I tried to shake it for him, which only made the whole kids' meal experience a lot more fun.

Do you need to go there? Not if it's out of your way, I'd argue. If you're after well-made but slightly impersonal chain Italian, Terroni is comparable if not better and about the same price. But that's not necessarily the point at Jamie's Italian – what the place offers is pretty good food, budget-friendly wines and warm, resolutely unthreatening service, and a taste of the Jamie Oliver magic above all.

And you may not have to travel all that far to eat there before long; the King Street Food Company, which holds the Canadian franchise rights, is busy scouting other Canadian locations, and there's a second location under construction at Mississauga's Square One Shopping Centre. It's set to open this summer, a representative said.

See the chef, the room and the food at Jamie's Italian at Yorkdale
March 4, 2016
Review
Chabrol: A tiny Yorkville bistro with big flavours and huge heart
February 19, 2016 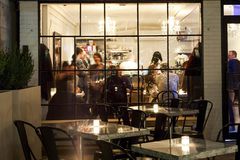 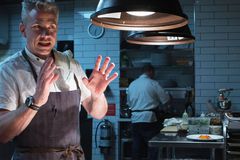