In the basement of a converted bungalow in Halifax's North End, Lyndell Findlay is making blue cheese for people who hate blue cheese.

With a musty funk hanging in the air, the 63-year-old Findlay shows me around her subterranean plant, which was dug out and built to her exact specifications over the past year. Wearing a shiny white waterproof apron, blue hairnet, and cat's-eye glasses, the petite Australian native scrapes the surface of a square cheese with the blade of a small knife, then cuts it into four large wedges.

The result is Urban Blue, an eight-week-aged cheese with a creamy, nutty paste and snakeskin-like greenish-blue natural rind. So far, says Findlay, owner of Blue Harbour Cheese, her strategy appears to be working. While she sold her first block just a few months ago, the cheese is already selling out in stores across Halifax and garnering fans including Halifax chef Craig Flinn and – remarkably, he says – his 18-year-old apprentices.

"People who don't like blue cheese don't like that musty, fungal note – the dirty socks," says Flinn, chef at the upscale bistro Chives and the more casual Two Doors Down. "Really strong cheeses swing too far to one degree, so you get all of that mustiness, skankiness, harshness, but you don't get the creaminess, the sweetness, to balance it out. That's what I like about this cheese. It's very balanced."

With a buttery texture and delicate mushroomy flavour, Urban Blue is best served on a cheese and charcuterie platter, says Flinn, although he also occasionally torches it overtop steak.

Cheesemonger Candace Leyte, who works at the upscale Halifax grocery Pete's, has been selling Urban Blue since January and says it's already one of their top 10 best sellers. "It's a rare thing for us to be able to walk to her location and bring it back here and sell it when it's so young and fresh," she says.

While each block varies batch to batch, with more or less blue, and more or less moisture, it's an artisan cheese, says Leyte. At the moment, the cheese itself is more beige than blue, which Findlay attributes to the behaviour of the P. roqueforti bacteria that lends its funky undertone and distinctive colour. To inoculate each block, she pierces it with a custom-made stainless-steel gizmo, constructed by a local metalworking shop, that resembles a medieval torture device crossed with a panini press. Also made locally is the abstract label on each cheese, painted by acclaimed Nova Scotia artist Wayne Boucher.

For Findlay, cheese making is career No. 5; she has also worked as a computer programmer, financial planner and community mediator. After leaving her last job, as a refugee protection officer for the UN Human Rights Commission posted in Chad, Darfur, Kenya and, most recently, Myanmar, Findlay realized she wasn't ready to retire.

Two years ago, she spent the summer apprenticing in Defiance, Ohio, studying under fifth-generation farmer and cheese maker Brian Schlatter at Canal Junction Farmstead Cheese. Watching the strapping 26-year-old carry heavy wheels of cheese, Findlay quickly realized that, as a woman in her early 60s, she had to design a plant she could operate solo, which is why she only produces cheese in 100 and 200-litre batches – small by cheesemaking standards – and makes two sizes of cheese: a small square and a larger brick.

While she's currently considering ramping up production, Findlay has other big plans: Go bluer. "My next cheese is really what I wanted to make in the first place. It's a Gorgonzola style, a little stronger, a little more visibly blue. I want to educate my cheese-eating public more toward piquant aged blue cheese… Step by step."Special to The Globe and Mail

Why Canadian cheese is great – and what our cheese makers can do to get even better
April 15, 2014 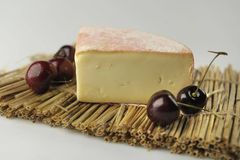 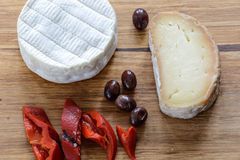 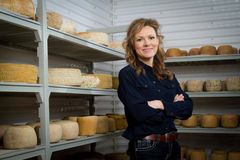