After tippling more than a dozen mezcals at several recent tastings, I believe I have discovered the reason why gringo bartenders in the United States and Western Canada are going loco for tequila's rustic country cousin.

Yes, there are all those silky smoke flavours and herbaceous undertones that come as such a surprise to those who have long maligned North America's oldest indigenous spirit – the original tequila – as a tonsil-torching Mexican firewater best known for the worm at the bottom of its bottle. Then there's the romance of rural palenqueros, who handcraft their revered agave nectar with ancient techniques (underground pit roasting and mule-drawn millstone mashing) passed down from generation to generation. Could there be any artisan spirit more intoxicating to the handlebar-mustached craft bartending movement, which mixes its classic cocktails with precise measures of authenticity?

Who would have guessed that these small family operations hidden away in remote villages could tease so many variable expressions of terroir from three simple ingredients – fire, water and agave – making it far more unique than mass-produced tequila? These winsome charms have all played a part in mezcal's north-of-the-border bonanza: From 2007 to 2011, there was a 48-per-cent jump in cases exported to the United States, according to Mexican government data. In British Columbia, there are now 40 varieties of mezcals available in liquor stores, while just last year there was only one. Alberta is also experiencing its own mini-mezcal explosion with a 20 per cent increase in cases shipped from 2010 to 2012.

Beyond mezcal's complexity, purity and diversity, there seems to be another obvious allure that's lifting it to the top-shelf pour of choice. To put it plainly: Mezcal gives you a bright, shiny, clear-headed buzz. Believe me, I've done my homework.

"It is a happy high," says Eric Lorenz of Lorenz Agave Spirits Liquid + Culture import company, which was responsible for bringing most of those 40 mezcals to Vancouver, where they are primarily sold in private liquor stores.

I arrived at the home of Cameron Bogue, the beverage director of Earls Restaurants, expecting to taste a few sips from his personal collection. Lo and behold, there was Lorenz with his mezcal smorgasbord lined up along the counter. Good thing I'd already eaten dinner. Before cracking the bottles, Lorenz gave me a tutorial on the oft-misunderstood differences between mezcal and tequila.

Both spirits are made from the pineapple-shaped core of the agave plant. In Mexico, all agave-based distillates are called mezcal. So tequila is technically a mezcal, but not all mezcals are tequila. Like cognac or champagne, tequila production is regionally restricted, primarily to the state of Jalisco. Since 1995, mezcal has had its own appellation of origin, the southwestern state of Oaxaca, but it can be also produced in small areas of other states.

Whereas tequila must be made with one type of agave, blue Weber, mezcal has 28 species at its disposal (which accounts for much of its diversity in flavour). And while tequila producers in Jalisco steam their agave hearts before distilling (a cooking distinction that dates back to the mid-19th century), mezcal producers continue to use the traditional method of slow pit-roasting over hot stones covered in earth. After roasting for upwards of 14 days, mezcal's agave hearts are mashed, either by mallet or horse-drawn stone mills, naturally fermented with wild yeasts in open-air wooden vats and distilled in clay or copper stills.

As aficionados like Lorenz will tell you, the Zapotec Indians have been using the same techniques to make mezcal since the 16th century, when the Spanish Conquistadors brought European distillation methods to the New World. (Others argue that there is archaeological evidence of pre-Hispanic distillation in Mexico, though the theory has yet to be proven.)

Though he agrees that the use of natural yeast makes mezcal a purer spirit than tequila (as the latter's production has become industrialized, chemicals and additives are routinely used to speed up fermentation), he's loath to offer any uneducated hypotheses on its feel-good properties.

Bogue, on the other hand, is happy to expound on why mezcal's artisanal heritage and historic obscurity appeals to modern mixologists.

"It's the bartending equivalent of nose-to-tail cooking," he explains. "Tequila has become very popular over the last 10 years and we were taught to believe that blue Weber agave was the premium plant."

But much like sirloin is now sneered at by hipster butchers for being the most blandly inflated cut of cow, tequila and its modern-industrial complex is being ridiculed for growing out of control.

"People are paying over $100 a bottle. That's absolutely insane," says Bogue. "In the same way that people are now cooking with the entire animal, bartenders have realized that these other parts – the weird wild agaves, the different regions and old-fashioned distilling methods – offer so much more flavour and character. Mezcal is more unique than tequila."

At Hawksworth Cocktail Bar in Vancouver, mezcal is the key ingredient in the Los Misterios:

Pour all the liquid into a cocktail shaker. Give it a hard shake and strain it into a Champagne flute. Top with 3 oz of cava. 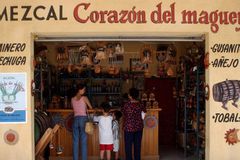 Getting a taste of Mexico's Tequila Route
August 17, 2011 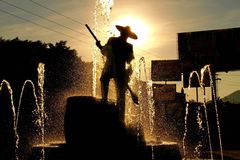 Ole, mole! Mexican regional cuisine finally gets its due
January 11, 2011 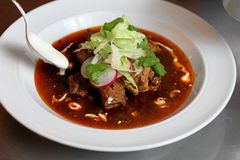