Here we are, 143 years young. In geopolitical terms, Canada is a toddler. I've tasted red wines older than this land. Mind you, unlike Canada, their best years were behind them, unless you enjoy dried leaves steeped in watery prune juice. I recall one 1865 Bordeaux in particular that I guessed probably had peaked around the First World War.

Some historians argue that the Great War, in particular the Vimy offensive, in which 100,000 blessed Canadian troops scored a sound victory over Germany in northern France, may have been Canadian nationalism's finest moment. Our soldiers showed that this land was a force to be reckoned with. More importantly, they served notice it was distinct from Britain, under whose flag they were fighting.

It was also, in a sense, thanksgiving to France, one of our founding cultures. We've acquired much from that country, not just a language, a culture of egalité and too many Louis Vuitton handbags. I think it's not an absurd stretch to say that wine, with the joie de vivre it implies, is right up there. Canadian estates owe more to the Gallic model than any other. Most of our quality grapes are French transplants. Stylistically, most of our winemakers rely on French-oak barrels, Bordeaux blending techniques and Burgundian winemaking nuance, or all three. Even our foul weather, believe it or not, is more akin to that of France's cool-climate districts than that of Italy, California or Australia.

I'm not sure what our famously bibulous first prime minister, Sir John A. Macdonald, would have made of Stag's Hollow Syrah 2008 from British Columbia's Okanagan Valley ($27.99), a bold red that reminds me of the muscular Cote Roties of France's northern Rhone Valley. But at 14.8-per-cent alcohol, it likely would have earned a place on his bar - next to his favourite bracers, whisky and Sherry.

It is a powerful, concentrated wine, fermented with 9-per-cent viognier, the aromatic white grape that can add glorious complexity to red syrah, as it does in Cote-Rotie. Flavours of spice, herbs and tar dance on a bed of rich plum and cherry. Pair it with lamb or game. The French might call it magnifique - though few Francophones here can obtain it. Regrettably, Sir John A.'s efforts at uniting the country through such grand initiatives as a national railway have yet to translate into a borderless liquor retail system. I regret to say you can't buy the Stag's Hollow in any province but British Columbia at the winery, or by the case at Blackhillswinery.com). It's a full-bodied white, with a core of luscious tropical fruit, rounded out by toast, spice and lively acidity. Warning: Don't serve it too cold or it will taste off-kilter. This wine really comes into its own 10 or 15 minutes after you pull it from the fridge. Try it with salmon.

No country excels with the gorgeously floral and opulent gewürztraminer grape like France (though Germany yields many beauties, too). Outside of Europe, Canada has little competition with this great white grape. One well-priced example is Tinhorn Creek Gewurztraminer 2009 from British Columbia ($16.99, Tinhorn.com). It's plump, round and almost sweet, with a core of lychee and a nice kick of spice. Perfect for Asian fare.

My No. 1 choice from Niagara in honour of Canada Day is Tawse Pinot Noir Lauritzen Vineyard 2008 ($44.95, Tawsewinery.ca). This is killer pinot that does a compelling impression of serious red Burgundy (all made from pinot noir). Medium-bodied, it's a glass of summer berries, with a soft shell of tannins that suggest to me it will age well for two to four years. I love the subtle herbal quality here. It's like walking through a garden centre while munching on raspberries. Salmon or duck breast would be fine table partners.

Released last week in Ontario through Vintages stores, Tawse Sketches of Niagara Riesling 2009 ($17.95, product No. 89029) is nicely balanced, with an off-dry core of tropical fruit cut by crisp acidity on the finish. Good tension in this light-medium-bodied white. Great as an aperitif.

I'd bet no shortage of smaller chateau owners in the Medoc region of Bordeaux, where cabernet is king, would love to have produced Megalomaniac Bravado Cabernet Sauvignon 2007 ($24.95, available through the winery, Megalomaniacwine.com and at the LCBO). Just don't tell them it's from Niagara. A full-bodied red, it sings with textbook cabernet notes of cassis, black olive and cedar, with slightly astringent, fine-grained tannins, all in fine balance. It would be splendid with rare beef. And, when you buy, a dollar from each bottle goes to Kids' Health Links, a charity that provides children undergoing medical care with technology to keep them connected to family, friends and school communities.

We may be a full-fledged wine nation now, but beer has long been the unofficial Canada Day sop and may well be for another 143 years. So, permit me to close with a salute to suds. Great Lakes Brewery of Toronto has just re-launched a seasonal beer called Canuck Pale Ale ($4.95 for a 650-ml bottle, No. 175109). I enthused about it in the past and it may be better in this new, improved formula. The brewery has cranked up the hops slightly for a bitter brew. Get it while you can (assuming you live in Ontario, alas). Quantities are expected to run out by mid-July. Your next chance won't come till Canada turns 144. 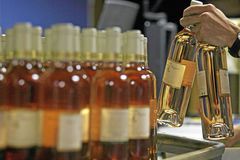 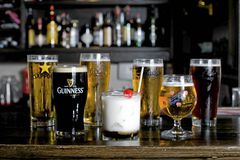 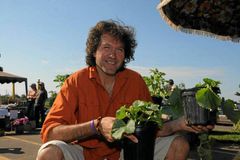