When you meet Christian Aquilini, 20, hardly a minute goes by without him talking hockey, NHL players or about his own stick-handling skills. "My shot's pretty fast," he said, grinning under his neatly trimmed beard.

Like many people with autism, he rarely makes eye contact and his voice is a bit gruff. But Christian – scion of the Aquilini family, owners of the Vancouver Canucks – has found other ways to connect, with his easy smile and knack for cracking jokes.

Christian has had to work hard to find his place in the world, despite the advantages of growing up in one of Canada's wealthiest families.

Diagnosed with autism at 19 months, he struggled to develop everyday skills – talking, pointing, simple math – even with the help of a team of therapists.

That struggle, his parents say, is one that too many families go through without adequate support. In a rare media interview at their Vancouver home, Paolo and Clara Aquilini said they approached The Globe and Mail to draw attention to the growing need to assist families as they raise children with autism into adults. Today, an estimated one in 68 school-aged children is on the autism spectrum.

Shortly after Christian was diagnosed in 1996, the Aquilinis joined 22 other petitioners in a lawsuit against the B.C. government for failing to pay for autism therapy. The case eventually led to an annual provision of $20,000 ($22,000 as of 2010) for each B.C. child under 6 with a diagnosis. (Of the provinces that fund autism treatment, Alberta is the most generous, paying up to $60,000 annually per qualifying child.)

With the right support and employment opportunities, Paolo said, "I think they can be productive in society."

Christian graduated from high school, but left community college after one month because he had trouble staying focused in class. His family connections opened the door to a job at Rogers Arena in Vancouver, where he lugs equipment, fills water bottles and tapes hockey sticks for the Vancouver Canucks.

"I was a college dropout," he quipped.

He lives with his parents, on a sprawling estate in the equestrian neighbourhood of Southlands. Their newly built mansion has the look of a five-star resort, without the hoity-toity feel. A housekeeper in jeans disappears after answering the door. Clara Aquilini is the one who offers coffee.

Taking a seat between his parents on a sofa, Christian listens as his father describes him as "mid-functioning cognitively and high-functioning socially." He looks unfazed when his parents explain that he still struggles with everyday tasks, such as cleaning his room, making change and staying organized. (His reluctance to groom his beard is an ongoing sticking point.)

Christian's job at Rogers Arena is a good fit for his interests and abilities, said Paolo, who serves as alternate governor for the Vancouver Canucks and president of the Canucks for Kids Fund, which supports a range of children's charities. Paolo's older brother, Francesco, is the public face of the Aquilini empire, a conglomerate of real estate developments, hotels and hospitality services, and North America's largest blueberry and cranberry farms – together said to be worth several billion dollars.

The Aquilinis' purchase of a 50-per-cent share of the Canucks in 2004 was a turning point for Christian, Paolo said. (They became full owners in 2006.) Almost overnight, Christian stopped fixating on Lego and began to follow NHL players on TV, memorizing their birth dates. His new passion for Canada's national sport increased his confidence, Paolo said, because at last he shared an obsession that "everyone else wanted to talk about too."

Christian still spends his free time at the rink shooting pucks. "I feel good about how I changed my whole life playing hockey," he said.

Encouraging children with autism to get involved in sports is a major focus of the Canucks Autism Network, which the Aquilinis founded in 2008. With an annual operating budget of $3.5-million, it's the only autism organization in Canada to provide a range of sports, music, arts and life-skills programs at no cost to families, other than a $25 annual membership fee. Offerings for young adults include social programs, volunteer opportunities and a fledgling employment initiative.

Paolo is a strong believer in dignity through work. A year ago, when he drove Christian to the arena for his first day on the job, "I was the happiest man," he said. After all their efforts to prepare him for adulthood, "it was like, we did it!"

But the early days after Christian's diagnosis were full of fear and uncertainty, Clara recalled. "I was really quite depressed." At 19 months, Christian was not meeting the milestones his older sister had. "He would stand in front of the fridge crying because he couldn't even point to what he wanted to eat," she said.

Paolo hired a specialist from San Francisco to train a team of therapists in applied behaviour analysis (ABA), a controversial therapy that involved of a system of punishments (such as restraining the child) and rewards (often candy) designed to modify a child's behaviour. "It was the only thing I found that had some science behind it," he said.

Starting at 22 months, Christian underwent up to 40 hours a week of ABA. Clara said it was hard to hear him crying at times when a therapist held him down. But after one week, "he could actually do things he could never do before." At the age of 4, Christian began to talk.

The Aquilinis credit early intervention and more than a dozen years of ABA therapy for much of Christian's progress. He was able to attend school with typical kids and still hangs out with old friends from kindergarten. Of her four children, Clara said, "he is the happiest."

Asked what he'd like to be doing in five years, Christian has a ready answer: "Play with the Vancouver Canucks." His father, putting a hand on his shoulder, encourages him to focus on a more attainable goal – winning the Stanley Cup. As an equipment manager assistant, Paolo explained, Christian is an official member of the hockey team, "which means he would be down on the ice holding up the cup with the players."

"I would be, like, on it," Christian said. But he doesn't stop there: "I have an interest in living on my own and raising my own family." Clara pointed out that he is good at coaching children, "and he can cook like you wouldn't believe."

Whether fatherhood is in Christian's future is still too soon to say. For the time being, he plans to keep working at Rogers Arena and, like so many others, dream about hoisting the Cup.

UBC students’ invention can warn parents of autistic meltdowns
May 15, 2018 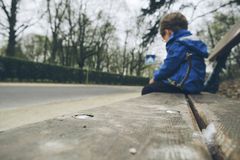 Study of siblings with autism reveals surprising results
May 12, 2018 How movies influence perceptions of brain disorders
May 12, 2018 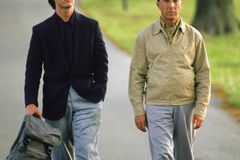