The flu is taking a higher-than-usual toll on children in Canada so far this flu season, according to data from the IMPACT network, which monitors the flu across major centres in Canada. Children die every year from flu-related complications, and this year the number of deaths so far is eight – a tragic reminder that the flu can be deadly.

The rise in flu cases and associated complications can partially be explained by the lack of flu vaccinations. Less than 25 per cent of Canadian children are vaccinated each year for influenza (overall, only about one-third of Canadians of all ages get the flu vaccine each year). To have population-level efficacy, Health Canada says there should be around an 80-per-cent vaccination rate; we are falling abysmally below this target – despite massive public health campaigns and ease of obtaining vaccines. These low rates lead to a reverse of the benefits of the "herd immunity" concept – whereby high vaccination rates percolate down to decrease influenza inoculation among those who are not vaccinated.

Beyond basic hygiene such as regularly washing your hands, the best way to reduce your chances of contracting the flu virus is to get immunized through vaccination. There are two types of vaccines available to children: live attenuated (which is given intranasally – generally not in babies less than 6 months old or have a history of severe respiratory disease) and inactive, an injection that covers three to four flu strains (trivalent: two influenza A strains and a B strain; versus quadrivalent: two strains each of influenza A and B).

This season the intranasal vaccine is still being recommended by Canadian public health agencies as an effective alternative to the traditional flu shot.

The American CDC has a great outline on their website about common misconceptions regarding the flu vaccine. Unfortunately, in my work as a physician, I have found these to apply to Canadians as well. Some of the most frequent misinformation regarding vaccinations are as follows:

1. You only need to get the flu vaccine once in your life.

This is not true. Since viruses evolve as a result of mutating, every season a new vaccine is engineered in laboratories ahead of the annual flu season, based on the past season and prediction models of what new annual strains will be. Our own immunity also wanes from the previous months.

2. I have an allergy to egg, so I should not get the flu vaccine.

The majority of vaccines are grown on fluid from chicken embryos and thus a small amount of egg protein is present in these vaccines and a theoretical risk exists. However, with the low amounts in vaccines no reported cases of any serious reactions have occurred. In fact, those with allergies are generally more prone to severe complications from actually contracting the flu (as they often have asthma or other co-morbidities) and thus even more reason to be vaccinated.

3. You can get seriously sick after getting the flu vaccine.

Often a localized skin reaction with some soreness is the only side effect. Low-grade fevers most commonly occur for a day after administration as well. Getting seriously ill after the vaccine is likely caused by something else. Often those who get vaccinated may get "flu-like symptoms" – since respiratory symptoms may overlap with other types of non-flu viruses. Another reason is that one may have been exposed to the flu virus just prior to the vaccine (you need two weeks to build up immunity) and thus manifest symptoms coincidentally after vaccination simply based on the incubation period. Lastly, perhaps they were exposed to a strain that was not covered by the seasonal vaccine (in general the National Collaborating Centre on Infectious Diseases based out of Winnipeg vaccines are often 40 to 60 per cent effective against current season viral strains).

4. It is better to actually get the flu than the vaccine.

No it is not better to get the flu than the vaccine. Although rare, the flu virus may lead to serious complications even in healthy people and is not entirely benign. Especially if you have high-risk chronic conditions or are considered high risk, the flu can be deadly. Vaccination is a more benign option to attain immunity.

5. I need antibiotics to cure the flu that I have contracted.

Absolutely not. Influenza is a virus. Antibiotics are for bacterial infections. They have no role combatting the flu or improving symptoms from it – in fact they will only make things worse for you in terms of side effects and may make you resistant to the beneficial aspects of antibiotics in the future if you were to contract a bacterial infection.

Remember that the flu is an annual thing – so is the need to get vaccinated. There are many difficult health choices in life, but this is not one of them. We need to increase vaccination rates – lets start with ourselves.

Dr. Ahmed Mian is an emergency physician and coroner in Toronto. He is also a faculty member at both Queen's University and the University of Toronto's Department of Family Medicine.

Effectiveness of flu shot under 20 per cent for dominant strain, experts say
February 1, 2018 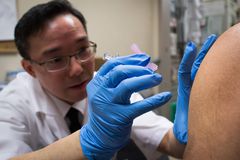 In the battle against the flu, bring on the fluids
January 23, 2018
Canadian health officials bracing for peak flu season
Subscriber content
January 7, 2018 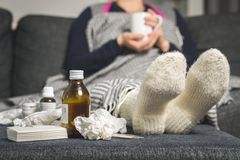