A Liberian doctor who was among three Africans to receive an experimental Ebola drug has died, the country's information minister said Monday, as a top U.N. delegation promised more help for countries battling the virulent disease during a visit to Sierra Leone.

Dr. Abraham Borbor, the deputy chief medical doctor at Liberia's largest hospital, had received the untested drug, ZMapp, after it was given to two Americans. After receiving medical car in the U.S. they later survived the virus that has killed about half of its victims.

A Spanish missionary priest infected with Ebola also received the treatment but died. There was no update given on the two other Liberians who took the last known available doses of ZMapp.

Borbor "was showing signs of improvement but yesterday he took a turn for the worse," and died Sunday, Information Minister Lewis Brown told The Associated Press.

Ebola has killed more than 1,400 people across West Africa in the countries of Liberia, Guinea, Sierra Leone and Nigeria. A separate Ebola outbreak emerged over the weekend in Congo, though experts say it is not related to the West African epidemic.

In Sierra Leone, the World Health Organization said Monday it is replacing its country representative. More international help is badly needed, said Dr. David Nabarro, who is co-ordinating the U.N.'s response to the Ebola crisis.

"The effort to defeat the Ebola disease is not a battle but a war that requires everybody to work together and effectively, and it is not easy to make a judgment as to whether we are winning the war or losing it," he told journalists at a news conference in the capital.

There is no proven vaccine or cure for the disease that can cause a grisly death with bleeding from the eyes, mouth and ears. The virus can only be transmitted through direct contact with the bodily fluids of the sick or from touching victims' bodies, leaving doctors and other health care workers most vulnerable to contracting it.

Only six people in the world are known to have received ZMapp. The small supply is now said to be exhausted and it is expected to be months before more can be produced by its U.S. maker.

Health experts caution that the drug had never been tested in humans before and it is unclear whether it works. They note there is a huge gap between the treatment the two Americans got at an Atlanta hospital, where five infectious disease experts and 21 nurses provided rigorous care, and West Africa, where even such basics as sterile fluids can be in short supply.

It also probably helped that the two Americans were considered healthy and well-nourished before they were infected and received prompt care, experts say.

Meanwhile, the family of 29-year-old William Pooley, the first British citizen confirmed to be infected with Ebola, said he is receiving excellent care at an isolation ward in London's Royal Free Hospital after being evacuated from the capital of Sierra Leone.

"We could not ask for him to be in a better place," they said in a statement.

Pooley, a volunteer nurse, has been flown back to Britain from Sierra Leone where he was working at an Ebola treatment centre.

The World Health Organization is also in the process of trying to evacuate a Senegalese doctor who contracted Ebola while working in Sierra Leone, said WHO Assistant Director General, Dr. Keiji Fukada on Monday.

Explainer: What is ZMapp and can it save Ebola victims?
August 12, 2014
Congo confirms first Ebola cases
August 24, 2014 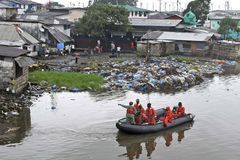 Courage, death and survival: On the front lines of the Ebola outbreak
August 8, 2014
Report an error
Due to technical reasons, we have temporarily removed commenting from our articles. We hope to have this fixed soon. Thank you for your patience. If you are looking to give feedback on our new site, please send it along to feedback@globeandmail.com. If you want to write a letter to the editor, please forward to letters@globeandmail.com.
Comments