Wayne Arsenault had a healthy sex life with his wife until a motor-vehicle accident eight years ago caused a traumatic brain injury.

"We haven't had sex since the accident," says the 64-year-old software developer from Keswick, Ont. "I have zero sexual drive."

"I love him, but there's not that intimacy or touch, there's nothing," says Deborah Arsenault, 59, who has been married to Wayne for 25 years.

While the Arsenaults's candour may be rare, their experience is common. Traumatic brain injuries (TBI) affect 500 to 650 of every 100,000 Canadians each year. A TBI is a form of acquired brain injury that occurs when there is sudden physical damage to the brain. Most injuries cause focal damage, which is confined to a small area of the brain, as well as diffuse damage, which occurs when the impact of the injury causes the brain to move back and forth, hitting the inside of the skull and causing extensive damage to the brain.

"In general, TBIs are more likely to cause sexual dysfunction than other brain injuries because of the diffuse nature of the injury," says Dr. Nathan Zasler, a physician who specializes in acquired brain injury care and rehabilitation and the chief executive officer and medical director of the Concussion Care Centre of Virginia.

The diffuse damage causes the most harm to the frontal and temporal lobes, which can result in a lack of interest in sex due to a general tendency toward apathy and indifference, or more interest than normal, causing deviant, hypersexual behaviour.

In spite of the connection between TBIs and sexual functioning, Zasler warns that every brain injury is different and to his knowledge there is no study comparing different aspects of sexuality across all types of brain injuries.

In fact, minimal research has been conducted because sexuality is still considered taboo. "When people do not speak about it, it may seem that it is not important," says Alexander Moreno, a clinical neuropsychologist at McGill University and the author of many studies on TBIs and sexuality.

But Moreno says that, according to different estimates, 50 to 60 per cent of individuals with TBIs could suffer sexual problems after the injury, including reduced libido, erectile dysfunction, pain during sex and difficulties in vaginal lubrication.

"We need to treat these issues just as seriously as we would treat someone with speech or walking issues. Sexuality and being loved are important parts of being human," Zasler says.

While treatment varies depending on the injury and the region of the brain affected, many medications have a negative impact on sex drive. "Certain blood-pressure medications can cause erectile dysfunction, and some antipsychotic meds can cause sexual dysfunction," Zasler says.

Wayne says his decrease in sex drive is due in part to the cocktail of antipsychotic and antidepressant medications he was prescribed to address the emotional effect the injury caused. "Once I started the meds, I lost my drive. I didn't wake up with erections and I became totally impotent," he says.

Thirty-two-year-old Amanda Oh, who suffered frontal lobe damage in a car accident in 2003, says she has the opposite problem: She wants to have sex with her boyfriend all the time. "Before the accident, my sex drive was controlled and normal. Now, anywhere we go, I want to take his clothes off because I can't control myself," she says.

At dinner with family or friends, Oh will start inappropriately touching her boyfriend and demand sex. "If he says no, I get angry and leave the table to calm down outside," she says.

She says she is working with health-care professionals to find ways to get back to being "normal."

While TBIs can have an impact on sexual drive, the love and intimacy component of a romantic relationship is also affected because of such things as difficulty with attention and memory. "If you had an anniversary coming up but memory is impaired and you forget to buy your wife flowers, that can cause turmoil," says Rolf Gainer, chief executive officer at the Neurologic Rehabilitation Institute of Ontario.

A person with a brain injury might also need cueing, which causes the non-injured spouse to take on a caregiver role. "The person with the injury becomes the dependent," says Caron Gan, a marriage and family therapist in Toronto who specializes in people with TBIs and has worked with the Arsenaults in the past.

"For the first three or four years [after the injury], I was basically being babied," Wayne says. Every day, Deborah would have to remind her husband to shower and brush his hair. "She was treating me like a four-year-old. It was demeaning and really hard on my self-esteem."

With Gan's help, the Arsenaults are finding other ways to express their love, including cuddling, holding hands and doing more activities together.

Wayne says that, surprisingly, this experience has brought him closer than ever to his wife. "She has unreserved love for me, which I didn't realize before," he says. "There's a silver lining to this cloud."

(Sex) lives of girls and women: How social media affects the way we think about sexuality
March 27, 2016 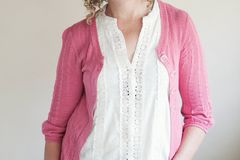 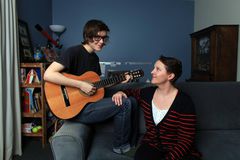 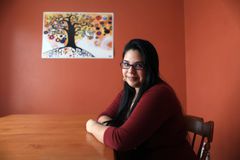